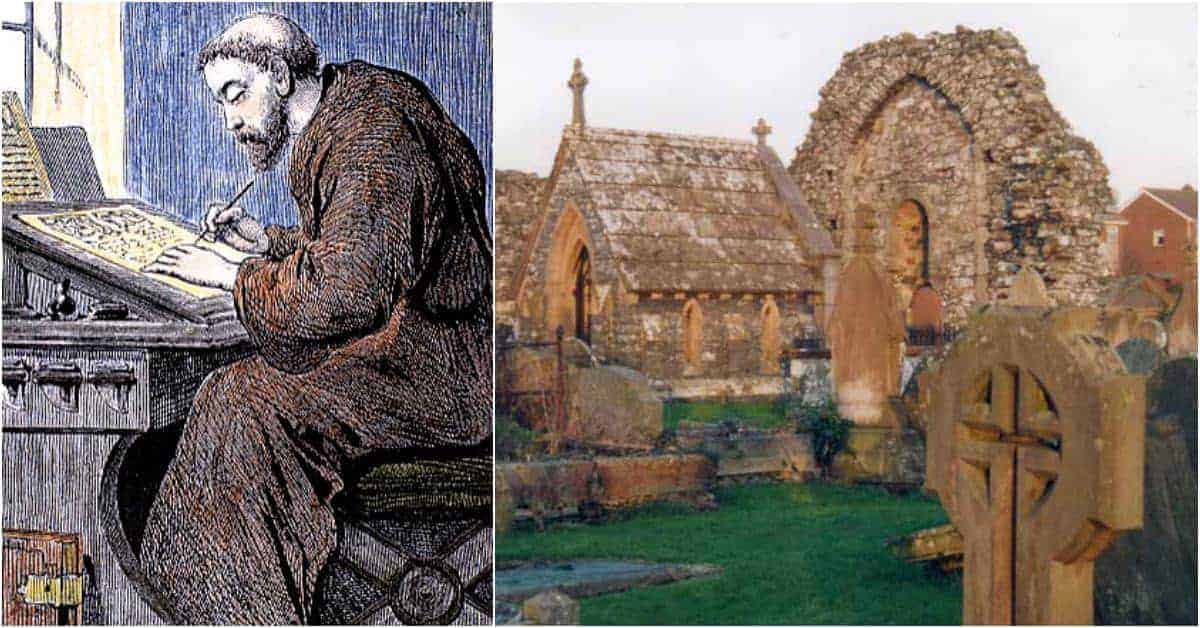 It doesn’t take much for copyright disputes to turn nasty. Intellectual property, being so personal by nature, is one of the most contentious things you can steal, especially when it has considerable financial potential. It’s precisely for this reason that the last few centuries have seen an enormous body of legislation passed to protect the rights of the original owner.

Traditionally, we’re taught that the first copyright law was the British “Statute of Anne” passed in 1710. Legally speaking, this is true. But the statute doesn’t represent the first historical example of a copyright dispute and arbitration. That honor belongs, surprisingly, to the Dark Ages, which has shed light on one illuminating, and notably bloody, story.

The dispute in question took place in sixth-century Ireland and involved two saints who disagreed over one’s right to copy a manuscript belonging to the other. It might sound trivial. But despite the participants being literal saints, the dispute may not only be the oldest copyright battle in recorded history but also the bloodiest. For if we take the legend at its word, the dispute soon escalated into a pitched battle that resulted in the loss of some 3,000 lives.

The two men involved were monks at Movilla Abbey in County Down, Northern Ireland. One was St. Finian (495 – 589), the founder of the abbey (540) and a nationally revered teacher of translation and transcription. The other was St. Columba (521 – 597), Finian’s best student, and later one of the Twelve Apostles of Ireland.

The prized text was a copy of the Bible belonging to St Finian. This copy was especially valuable because it embodied the first Vulgate Latin translation from Hebrew, painstakingly undertaken two hundred years earlier by the fourth-century historian, theologian, and translator, Saint Jerome. Finian brought this copy of Jerome’s translation back with him from Rome, and the presence of this remarkable manuscript—the only Latin one in Ireland—brought considerable prestige to his abbey as a great centre of learning.

Finian’s idea was to translate and transcribe the text from Latin to Gaelic before disseminating it throughout abbeys and monasteries across Ireland. What he didn’t know was that his star student, Columba, had also had the same idea. Columba was one of Movilla Abbey’s most famous alumni. As deacon he performed a miracle, re-enacting Jesus’s popular party-trick of turning water into wine to the great delight of his fraternity. He took a brief leave of absence during the 540s. But he returned in 550 to visit his old teacher, who had recently returned from Rome with his prized manuscript.

After the text’s arrival in the monastery, Columba secretly began stealing it from Finian and working on producing his own translation. Known as either the “Cathach of St. Columba” or the “Psalter of St. Columba” the text still survives today, providing us with both the earliest Gaelic translation of the Psalter and the earliest example of Irish writing. Whether or not it was indeed copied by Columba, however, remains a contentious issue among historians.

When Finian found out what Columba had been doing he was outraged. He demanded that his former student hand over the copy, which was nearing its completion. But Columba was wouldn’t listen. To the increasing frustration of his former teacher, he refused to surrender his copy of the manuscript. Naturally, their once-friendly rapport became notably bitter and hostile. But neither man could have foreseen that their combined obstinacy was sowing the seeds of a bloody, pitched battle.

Unable to convince his student to do away with his copy, Finian arranged to have the matter brought before a tribunal presided over by the High King of Ireland, Diarmait mac Cerbhiall. Finian’s argument was straightforward: because the original text belonged to him, so too should any copy of it, especially one made under his own roof and without his consultation. Columba made the counterargument that, while Finian did indeed own the original, he had done all the work translating and therefore the copy should be his. He failed to convince the king, however, who arbitrated that:

“To every cow belongs her calf, therefore to every book belongs its copy“.

Unnecessary pastoral analogy aside, the king’s message was clear: as the owner of the original work, Finian was therefore entitled to ownership of any subsequent copy. Should we believe this to be true, King Diarmait’s words mark the first verdict in a copyright case in history. His verdict proved too much for Columba, however. The two may have been related by blood, but because of another run-in they’d had previously it was bad blood.

Shortly before bringing the matter of the manuscript before King Diarmait, one of Columba’s relatives, Curnan of Conn Acht, had participated in a hurling match—a quintessentially Irish sport still played today—in which he accidentally killed a member of the opposing team. Fearing for his life, he sought sanctuary with Columba, invoking the ancient “Law of Sanctuary”. It didn’t save him, however. King Diarmait sent a number of heavily armed men after Curnan and tearing him from Columba’s arms they put him to death on the spot without trial.

King Diarmait’s ruling, therefore, proved the final straw for Columba. Rallying the O’Neill clan to his cause, he instigated a full-scale revolt against the incumbent king. Eventually, the two sides met sometime in the mid-sixth century (dates range from 555 – 561 AD, though the latter is most commonly accepted) at the Battle of Cúl Dreimhne (the “Battle of the Book”).

Narratively speaking, it would be amazing to describe how the two sides drew up opposite one another one dewy, misty morning. It would be wonderful if I could say that Columba took part in the battle himself; that saints and sinners fought side by side with bravery and ferocity; and—though this is unlikely—that some participants realized the great irony of the fact they were fighting a battle that had originated with an entirely Christian attempt to spread the word of God.

But as is so often the case with battles of the Dark Ages, we know almost nothing about it; just that it took place in the túath (principality) of Cairbre Drom Cliabh, that it claimed the lives of around 3,000 men, and that it was a decisive victory for the Uí Néills and a crushing defeat for King Diarmait. We also know that the king was not among the dead strewn across the battlefield; though in hindsight he may have wished he had been.

King Diarmait would go on to lose the next battle he fought against the king of Tethbae and was ultimately murdered in 565 at the hands of yet another Irish king, Áed Dub mac Suibni. As for Finian, we know more about the success of his abbey than we do about the man himself. Finian’s copy of Jerome’s Vulgate Bible—the source of so much bloodshed—continued to attract hundreds of clerics and scholars to Movilla.

Both as a center of religious learning and, as recent archaeology has shown, of bronze and glass production, the abbey flourished until 823 when it was sacked by marauding Vikings. Though it recovered some of its former glory as an Augustinian abbey in the twelfth century, it would never again command the respect and prestige it once had. Molvilla Abbey’s functional history came to an end when, along with thousands of others, it was shut down by Henry VIII in 1542.

As for Columba, he went into exile shortly after the Battle of the Book. The story goes that a Synod of clerics, who blamed Columba solely for the bloodshed, debated between exile or execution. They were eventually persuaded to the former, on the condition that while in exile he would convert 3,000 people to Christianity; as many as had been slain upon the battlefield. He left Ireland in 563, boarding a leather-clad wicker coracle along with twelve others. Mercifully they weren’t lost at sea or dashed upon the rocks during their short voyage, instead washing up on the shores of the Scottish island of Iona in 563.

While his youth may have been marked by violence, Columba seems to have passed his later years living a life of quiet, albeit austere, serenity. His mission of converting Scotland to Christianity was underpinned by a simple, monastic daily routine; he consumed nothing but barley or oats, drank only water and slept on a cold, bare slab of rock. Once he was too weak to venture too far he spent his final years plying the craft he’d learned under Finian, diligently copying manuscripts.

On the eve of death, he was copying a Psalter, but stopped abruptly at the end of a sentence, announcing that Baithin, his cousin and successor, would have to complete the work. He then made his way to the church’s altar, where the monks found him the next morning. Hanging onto the altar and on the verge of death, Columba managed to summon just enough strength to give them his blessings before passing away.