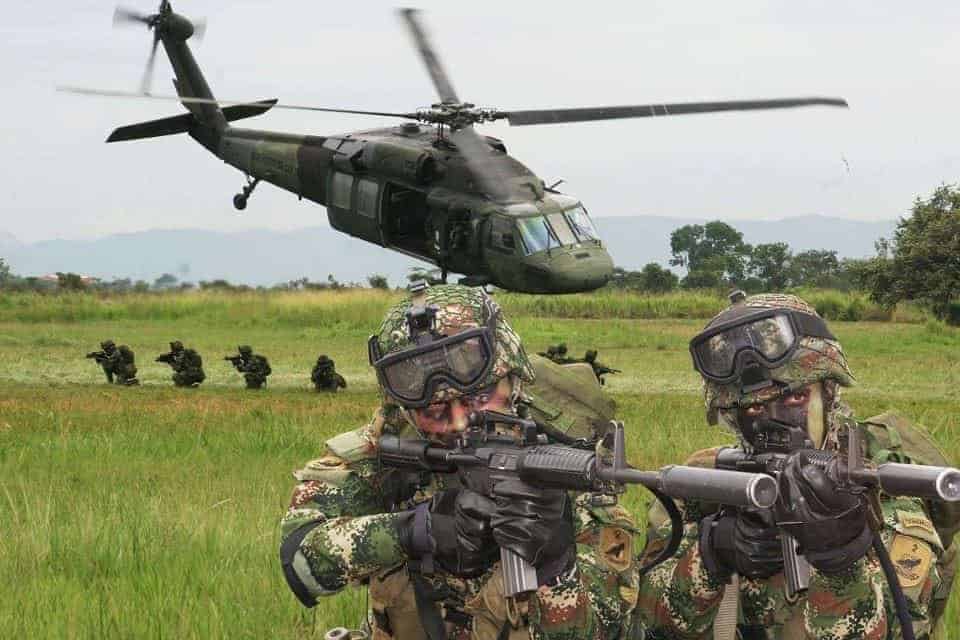 Recently, the Colombian people rejected a peace deal with the Revolutionary Armed Forces of Colombiaâ€”People’s Army (FARC) in a nation-wide vote. If the deal had been approved, the FARC would have permanently laid down its arms and become a legitimate, legal political party.

In the eyes of many, however, a peace deal with the FARC is nothing more than a farce. This might sound harsh, and legitimizing the FARC as a political party would allow Colombia to avoid further bloodshed. Yet, the war with the FARC rebels has cost Colombia over 200,000 lives with many of those killed being innocent civilians. Further, it’s estimated that roughly 5 million people have been displaced due to the conflict.

Many had hoped that the war, which has raged for decades, would finally be brought to an end. However, in a tight vote -50.2% to 49.8%- the Colombia people rejected the would-be peace deal that was signed and supported by both the Colombian President and FARC leaders.

It’s believed that the FARC has planted most of the land mines now littered across Colombia. For the record, it’s possible that paramilitary forces, and perhaps even government forces, were responsible for laying some of the land mines. Either way, over 10,000 people have died as a result of these mines.

The Ottawa Treaty, signed in 1997, prohibits the use of landmines, and was signed by Colombia (the United States, Russia, China, and 32 other countries did not ratify the treaty). The reasoning for outlawing landmines is simple: far too often civilians are killed rather than military targets.

Yet this didn’t stopped the FARC from littering much of rural Colombia with these dangerous weapons. In fact, Colombia trails only Afghanistan in the total number of landmine victims. About 62 percent of the victims were police, with the remaining being civilians (this likely includes armed paramilitary members, however). Often, the victims were minors playing and trying to enjoy their childhood.

In 2015 the FARC agreed to stop using landmines, and to also help the army remove them. This was actually demanded by the government of Colombia as part of the peace process. While many landmines have been removed, many other mines are still scattered about the country.

Generally, the FARC has relied on hit and run, kidnappings, bombings, and other guerrilla tactics. It was rare for the rebels to launch a major offensive. Even at its peak, the FARC’s ranks were never as big as the military’s. Add in training, access to weapons, and international support enjoyed by the government and it was clear that the FARC were going to have to fight an asymmetrical war.

In 1998, the FARC switched gears and launched several large-scale attacks. These attacks would rock Colombia, showing that when it wanted to, the FARC could go toe-to-toe with the police and military, especially in the rural regions of the country.

In March of 1998 the 52nd counterguerilla battalion of the Colombian Army’s 3rd Mobile Brigade entered PeÃ±as Coloradas, hoping to roll back the FARC’s influence in the rural region. The communist rebels launched a massive counter attack, with around 700 FARC troops clashing with the military division.

In the ensuing battle 64 government troops were killed, while 19 were wounded and another 43 were kidnapped. The FARC saw 30 troops killed and 80 troops wounded, but were able to push the division out of the town. This large scale battle marked one of the biggest defeats of the war.

In August of the same year the Colombian military would suffer another major setback. Hundreds of FARC troops launched an attack on Miraflores, another isolated, rural town. Part of the Colombian government’s anti-drug task force was based Miraflores. With the FARC increasingly relying on narcotics to fuel their operations, targeting anti-drug units was becoming a priority.

In total, 110 government troops and 70 anti-narcotics police were stationed in the town. Meanwhile, hundreds of rebels crept up on the village under the cover of the forest and terrain, and were able to launch a surprise attack. A fierce gunfight quickly erupted but for several hours the government forces were able to hold the rebels back.

With ammunition running low, and poor weather hampering the ability to call in effective air support, the military base was eventually overrun. 16 government soldiers were killed, 26 injured, and 129 captured, marking yet another stunning defeat for the government. Some government troops were able to escape into the jungle, and it is unknown how many rebels were killed.

Another big defeat for the government was yet coming. In November of 1998 the FARC launched a massive attack on the department capital of Mitu. It’s believed that 1,200 or more FARC rebels were involved. They were able to quickly overrun the government forces in the town, holding it for three straight days. During their occupation, the FARC executed 30 security force members and 11 civilians, and took another 61 people prisoner. 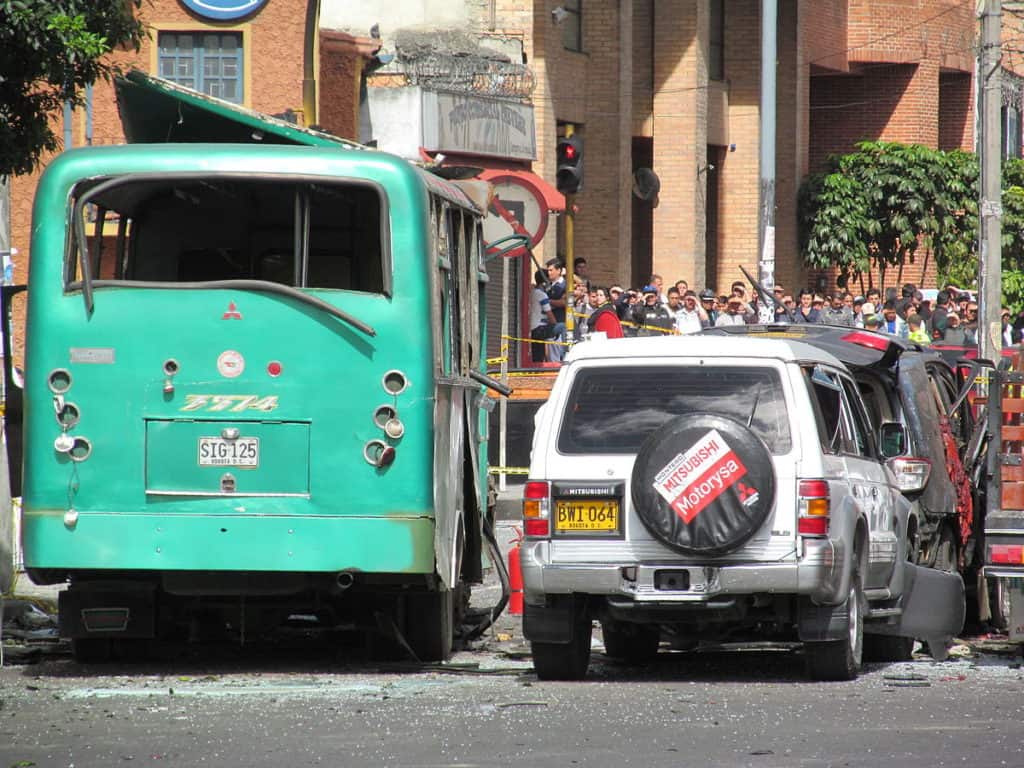 The El Nogal nightclub attack in 2003 sent a clear message to the Colombian people: you’re not safe anywhere. Most of the war has been fought far away from the Colombian capital of Bogota, but the El Nogal attack struck right at the heart of the primate city. The El Nogal club was (and is) a high end and elite night club. Towering nine stories high, the club was one of the most chic hangouts in town.

That helps explain why it was targeted. The FARC wanted to go directly after Colombia’s elite, and the nightclub would hit them where they were most vulnerable. It would also send a message that no one was safe at any time. Even nights of leisure could result in death.

In order to maximize casualties, FARC rebels drove a car into the third floor parking garage of the night club. The car was laden with 200 KG of explosives. In the resulting blast 36 people were killed and over 200 were injured. Approximately 600 people were believed to be in the building at the time.

Colombian authorities believe that it was John Freddy Arellan, a squash instructor, who drove the car into the club. Arellan was with his uncle at the time and had only weeks earlier acquired membership to the club. Authorities suspect that Arellan believed that the bomb would be detonated only after he left the club. Instead, it appears that the FARC rebels detonated it while Arellan was still in the car.

The FARC denied responsibility for the attack, and claimed that it was state-sponsored terrorism designed to build support for the government. In 2008, however, Colombia authorities released documents from the computer of slain FARC leader Raul Reyes. Allegedly, Reyes called the act formidable, and made the case for denying responsibility.

Before the bombing, the FARC had also warned that it planned to strike against the country’s elite, providing more evidence that the FARC was behind the attack.

This attack doesn’t rank as the worst in terms of human casualties. If you’re concerned about the environment, however, this one will make your stomach roil. In June of 2015, FARC rebels bombed Colombia’s oil pipelines on two separate occasions. As a result, thousands of barrels of oil poured into the country’s rivers and ecosystem.

Over 150,000 people were left without access to potable water. Countless animals were injured, plant life destroyed, and entire ecosystems were disrupted. In sum total these bombings caused one of the worst environmental disasters in the country’s history.

As far as political immediacy, the attacks were launched after FARC rebels declared an end to the cease fire in 2015. Negotiations weren’t going the way FARC rebels wanted, so they stepped away from the table and stepped up attacks. The pipeline bombings may have been an effort to force concessions.

In a strange perversion of logic, the FARC rebels called the environmental damage an “undesired consequence” but ultimately blamed the damage on the government and elites. The FARC also said that the “eco-genocide” carried out by the government was far worse.

While the FARC may certainly have had legitimate grips concerning the extraction of natural resources, blowing up an oil pipeline and spilling thousands of barrels of oil into the environment seems like a bad way to express concerns. Many of those who suffered the worst were Colombia’s poor, as well as innocent animals.

Colombian President Juan Manuel Santos stated that Colombia’s fragile ecosystem might never recover from the damage. Santos also said that the act wasn’t an act of “war” but instead “barbarity”. Meanwhile, non-profits urged the FARC to leave the environment and local communities out of the conflict.

In April in 2015 the FARC and the Colombian government were in the middle of peace talks. Suddenly, the talks broke down. Both sides quickly pointed fingers at each other, but outside of negotiating rooms, casualties began to mount.

On April 15th the FARC launched one of their deadliest attacks in years. The FARC attacked a routine army patrol at about midnight. In the ensuing gunfight 11 soldiers were killed and dozens more were injured. At the time, it appeared that both sides were still under a cease-fire. The soldiers had no reason to suspect that they were going to be attacked.

The attacks occurred in a mountainous region. Given the terrain and time of night, it’s not difficult to imagine how the FARC were able to get the upper hand on the government troops. The government claims that the troops were merely on patrol, carrying out “territorial control” and ensuring the protection of civilians. FARC leaders claimed that the soldiers were engaged in “military operations” and that it was the government soldiers who initiated the attack.

Of course, it’s hard to know who is telling the truth. Given the high number of government casualties, and the fact that only one rebel was killed, however, it’s likely that the FARC initiated the attack and caught the soldiers off guard. As for reasoning, FARC leaders may have been trying to pressure the government into making more concessions.

It appears that the plan backfired, however. As a result, the government resumed its aerial bombardment of FARC positions. It’s hard to determine how many rebels died as a result of the bombardment, but peace talks were certainly strained. At the time, the FARC and Colombian government had been negotiating for about two years, with most of the talks taking place in Havana.