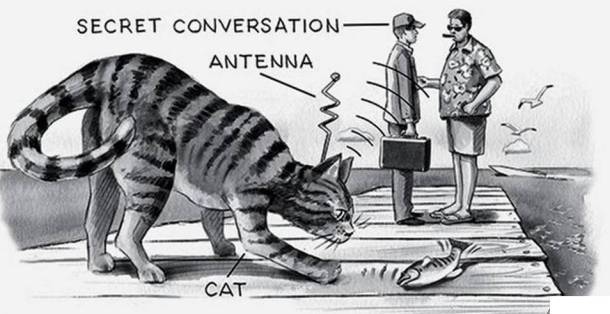 In the 1960s, at the height of the Cold War, the CIA was looking for ways to spy on foreign officials, namely the Russians. They wanted a way to spy on officials that were talking in public or on embassy grounds in a way that would not arouse suspicion. They realized that cats were often seen on the streets and people would pay no mind to a stray cat wandering about. If the CIA could just find a way to get a cat to spy on their targets for them, they could have a way to get an ear on what their targets were saying.

Thus began a five year mission to train and turn a cat into a cyborg. The first order of business was to see if the cats could be trained at all. In the lab the handlers were able to get the test cats to move small distances and move to and stay at certain locations within a familiar environment. These initial training sessions convinced the CIA to go ahead with the second half the operation to turn a cat in to a cyborg spy.

Turning the cat into a cyborg was no easy task. They needed to design a way to hide a transmission device that would not be noticed and would not bother the cat. If the cat was licking or scratching at the device they might expose it to watchful eyes. They built a ¾ inch transmitter which was to be embedded at the base of the cat’s skull. The microphone was to be placed in the ear canal and the antenna wire was designed to be wrapped around the tail and hidden among the fur of the cat. The most difficult problem was finding a way to hide the batteries. Since cats are small they were not able to use very large batteries and were therefore very restricted in the length of time that the cat could record.

Once the design of the technology was complete, it was a matter of a one hour operation to get all the equipment into the cat. After the operation the CIA began training and observing the cat to make sure that the device not only worked, but that the cat was comfortable and could move in the same way that it was able to before their operation. The grey and white female cat then started her training to become the ultimate spy cat for the CIA.

They started by running her through a number of different operational scenarios that she was likely to encounter or be used for as a spy. But despite the efforts of the CIA and the trainers her behavior in the missions was always inconsistent. This caused some of the people involved in the project to worry that they had made a mistake in choosing a cat for their spy.

Read on to see how this cat, code-named Acoustic Kitty, did on her very first mission.