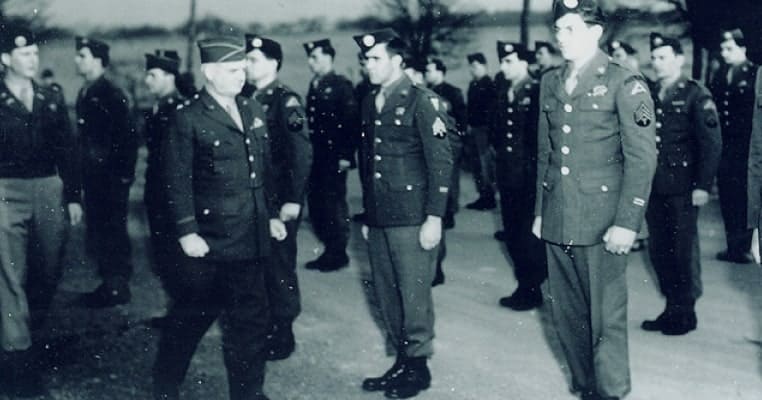 William Colby, former Director of the Central Intelligence Agency, is best remembered for his stint as America’s top spy from 1973 to 1976. It was a precarious stretch for the CIA, during which Congress, in a reformist mood after the Watergate scandal, launched investigations that unmasked many of the agency’s worst abuses. As the man on the spot, Colby became associated with the rot emanating from Langley. However, there was a time, decades earlier, when William Colby had been a bona fide American hero, parachuting into Nazi-occupied Europe to carry out dangerous operations that stuck it to Hitler and the Third Reich.

The last of those, Operation RYPE, came in 1945, when Colby parachuted into Norway at the head of an Office of Strategic Services (OSS) team. Their task was to blow up rail links to impede the evacuation of the German occupiers, and keep them from reinforcing the Third Reich’s crumbling eastern and western fronts. It turned into a hair raising mission that started off horrifically, and remained harrowing until the end. Nonetheless, Colby managed to snatch success from the jaws of catastrophe, and accomplished the mission.

William Colby and the OSS

William Egan Colby (1920 – 1996) was born in St. Paul, Minnesota, the son of a US Army officer. Although the father was a career soldier, his pursuits focused more on the intellectual and scholarly contributions to the military, rather than on the strictly military. While serving in the Army, Colby’s father was also an author and scholar who did stints as an English professor in Vermont, Georgia, Washington, DC, and overseas in far off China.

That mobile childhood left its mark on William Colby, broadened his horizons, and ingrained in him an interest in world affairs and a thirst for adventure. In 1936, at age 16, he seriously considered fighting in the Spanish Civil War with the American volunteers of the Abraham Lincoln Brigade against general Francisco Franco’s fascists. Instead, he ended up accepting a scholarship to study at Princeton University, and after graduating with a political science degree, he went to Columbia Law School in 1940. Colby dropped out of law school after his first year to join the army, and was commissioned a second lieutenant in August of 1941.

His career began in Fort Sill, Oklahoma, where he trained to become an artillery officer. He then signed up for an experimental airborne artillery unit whose concept seemed ridiculous to Colby, but whose training, he figured, would get him qualified as a parachutist – something that was all the rage for the adventurous in the early 1940s. He got the parachute training, as well as training in demolitions and small arms. While Colby was learning how to jump out of airplanes and blow stuff up, a new organization, that would exhibit a keen interest in people with interests and qualifications like Colby’s, came into being.

The Office of Strategic Services (OSS), the CIA’s predecessor, was created in June of 1942 to collect and analyze strategic intelligence, and to carry out “special activities”. Operating under the overall command of America’s joint chiefs of staff, the OSS was headed by William “Wild Bill” Donovan, a WWI Medal of Honor winner and personal friend of the president. Like FDR (and William Colby), the OSS chief was an Ivy Leaguer and Columbia Law School alumnus, and he saw to it that his organization recruited heavily from Ivy League circles. Colby, with Princeton and Columbia on his resume, an international background, a thirst for adventure, and a qualified parachutist with demolition training, was just the type the OSS was looking for.

Colby was accepted into the OSS in 1943, and received intensive training in guerrilla tactics to operate as a “Jedburgh” – OSS agents who worked with resistance forces in occupied Europe, and whose program motto was “Surprise, Kill, and Vanish“. In his first mission, Colby deployed into France as a Jedburgh team commander, working with rural guerrillas of the French Resistance. It entailed harrowing adventures, starting with a pilot who mistakenly dropped him 20 miles off target, in the middle of a German occupied village, and including a narrow escape from a collaborationist traitor who almost delivered him to the Gestapo.

Colby overcame the rough start to his Jedburgh mission in France, and worked his way through the difficulties. He eventually ended up commanding about 6000 French irregulars, and led them in harassing the Nazis, until his command linked up with general George Patton’s Third Army in the fall of 1944. That stellar performance was praised by Colby’s superiors, and earned him a Bronze Star medal plus a French Croix de Guerre. He was given some time to rest and recuperate, and upon his return on November 1st, 1944, he was given command of an ethnically Norwegian OSS unit operating out of Scotland.

After America joined the war, the War Department tried to figure out the best way to make use of first generation bilingual immigrants from enemy-occupied areas, to help the war effort. Eventually, a decision was made to establish special units of bilingual US citizens from certain ethnic groups, for operations in enemy-occupied countries. Accordingly, ethnic battalions of Filipinos, Japanese, Austrians, Greeks, and Norwegians, were created in 1942.

The Norwegian one was the 99th Infantry Battalion, Separate (because it was unattached to any regiment). It trained for winter and alpine warfare in Colorado, and was then shipped to Scotland in September of 1943. It was there that the OSS came a-calling, seeking Norwegian speakers to volunteer for special missions. Eventually, 12 officers and 80 men from the 99th Battalion were selected for what would become the OSS’ Norwegian Special Operations Group (NORSOG).

As things went from bad to worse for the Third Reich, with the Soviets rolling Hitler’s empire from the east and America and her allies doing so from the west, the Nazis found themselves in desperate need of military manpower. One potential source was the German occupation garrison in Norway, which numbered in the hundreds of thousands. As the Nazis’ day of reckoning drew ever closer, the Germans started evacuating their forces from Norway to reinforce their crumbling fronts on the European mainland. So the Allies decided to impede that evacuation, and the task was handed to the OSS.

The OSS drew up a mission, Operation RYPE (Norwegian for grouse), to parachute a NORSOG team into Norway. Once landed, they were to slow the German evacuation by blowing up bridges and links along vital Nordland Railway, the main ground link to the country’s north. William Colby was put in charge of the operation, whose primary target was to be the Grana Bridge, near the village of Snasa. On March 24th, converted B-24s, laden with NORSOGs instead of bombs, took off from Scotland and winged their way to Norway.