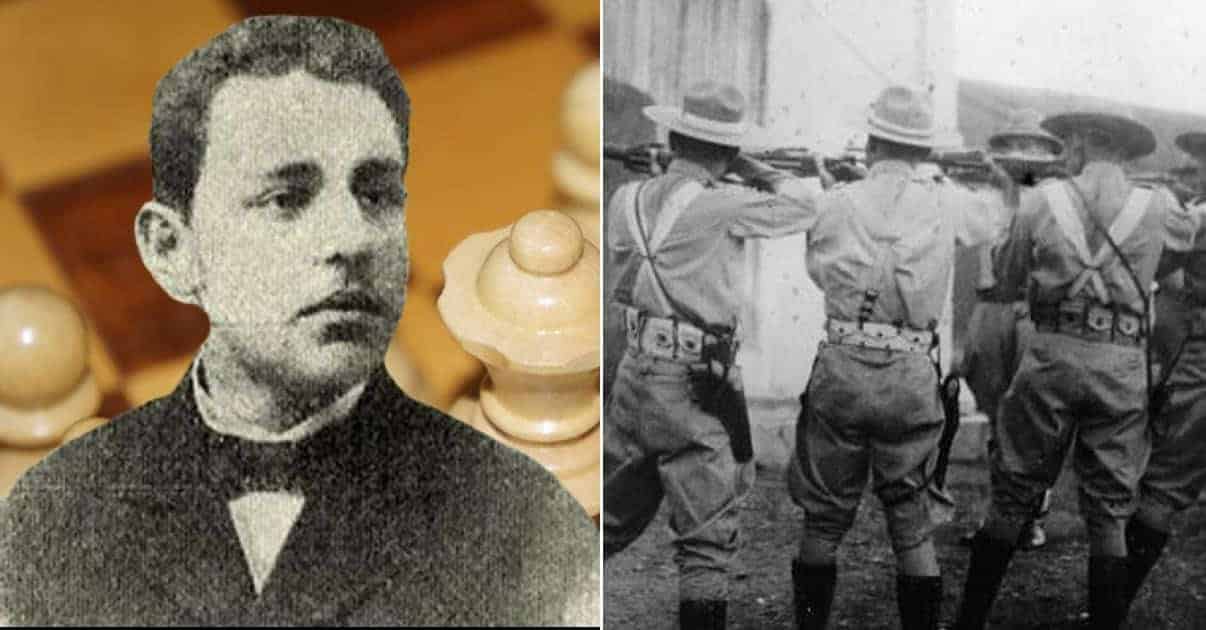 Bernstein then fled to Paris completely penniless. His family went through perilous times as they tried to rebuild their lives. In the summer of 1940, he fled to Spain after the capitulation of France. The family had to hide in caves during the daylight hours to avoid the police and border forces. After two exhausting nights, they reached Spain, but Bernstein had a heart attack and was unconscious. The family was immediately arrested and separated. Through the intervention of some influential friends in Spain, his family was released and was allowed to stay in Spain. They returned to Paris in 1945.

Just surviving obviously forced Bernstein to take some time off from chess. But persistent depressions caused Bernstein to make a triumphant return to the game. Bernstein found that he was still quite good. In 1933 he tied a match 2-2 with the then world champion, Alexander Alekhine and a year later finished just behind Alekhine and Euwe at Zurich.

The year 1940 brought about another major financial crisis, so Bernstein decided to hang up his legal hat and return to chess full time. He was a bit less consistent in his wins but still a formidable opponent at the ripe old age of 72. Some of his notable games include: placing 2nd, behind Herman Steiner, at London in 1946. In the same year, he tied for 15th-16th at Groningen. In June 1946, he won a game against Lajos Steiner at a match Australia vs France in Australia. In December 1948, he came out in a draw against Reuben Fine at a cable match New York vs Paris. In April 1954, he lost two games against David Bronstein at a match France vs The Soviet Union at Paris.

In 1954, he tied for 2nd-3rd with Miguel Najdorf, behind René Letelier, at Montevideo at age 72. Nadjorf protested that it was unfair to play such an elderly opponent. Nadjorf was so confident he would win that he convinced the tournament organizers to double the First Prize money at the expense of reducing the payouts for the lesser prizes. This gamble backfired in spectacular fashion as the “elderly” Bernstein routed him in a 37-move Old Indian Defense that won the latter the Brilliancy Prize.

Bernstein was also known just as much for his verbal sparring as he was for his clever chess moves. When the golden Soviet team visited Paris in 1954 for a match against France (the country for which Bernstein now played for), he told his opponent, the world title challenger David Bronstein, “Young man, you played worse than the icon of Soviet chess. When I chose this defense against Mikhail Tchigorin in the all-Russian championship at Kiev 1903, he countered with the best move 5 c3!”.

Bernstein’s final end was sad, but also chess related, which is undoubtedly fitting for a chessmaster. When the Olympiad was held in Russia in 1962, Bernstein finally was returning home, and to play chess on top of it. As the plane circled the airport, Bernstein had a heart attack. He never fully recovered and passed away a few months later.

Nevertheless, Bernstein will always be remembered as the man who literally was saved by chess — more than once.