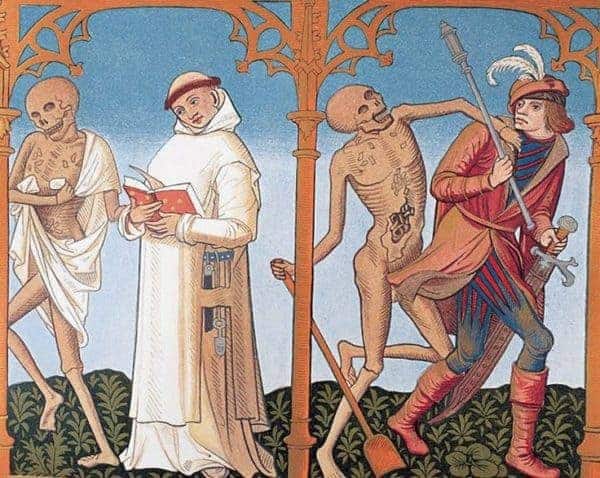 There are a few reasons why people of the Medieval period believed that horseshoes were lucky. The first was that they were made of iron, a metal that was long believed to ward off evil spirits. The other reason comes from the legend that is told about Saint Dunstan in the 10th century. It was said that Dunstan worked as a blacksmith and one day the Devil came into his shop. Dunstan pretended not to recognize him and went about getting horseshoes for the Devil’s horse.

However, instead of nailing the horseshoes to the horse, Dunstan nailed them to the Devil instead. The horseshoes caused the Devil great pain but Dunstan said that he would only remove them if the Devil promised never to enter a home with a horseshoe on the door. The horseshoe was also believed to ward off witches.

It was believed that the reason why witches rode on brooms was that they were unable to ride horses. So it was said that a witch would be reluctant to enter any home with a horseshoe over the door. There were rules about the horseshoe. The first was that it had to be iron and the second was that it had to have come off the horse on its own and not taken off by man.

Sneezing Out the Soul

One of the most well-known superstitions that is believed to come out of the Middle Ages is the need to say “bless you” after someone sneezes. There are actually a few different reasons why sneezing was such a sire situation for those in the Middle Ages. The first and most common being that it was the time of illness and the plague, if a person sneezed it was a possible sign that they might be the next to die.

Additionally, there was the belief that sneezing gave the Devil the opportunity to enter the body and therefore the person who sneezed needed the help of God and the church to get him out. Saying “God bless you” was believed to be a way to keep the Devil from entering the body and therefore save the person who had sneezed. It was a way to explain the death that would sometimes occur after a person sneezed and give people the sense that they could do something to help since not everyone had access to a doctor.

There was also the prevailing belief that a person could sneeze out their soul. This was also counteracted by a person saying “God bless you” or covering the face in order to keep the soul in. This superstition was help with the spread of illness during a time where there was little way to help people overcome some of the more devastating illnesses. Since most people were unable to afford to contact a doctor, anything that could be done to help a person avoid becoming sick or losing their soul was quickly latched onto by the populace.

Spilling Salt Was a Bad Omen

In the Middle Ages, salt was a precious resource. It was very expensive and it was believed to have medicinal properties. If salt was ever spilled, it was no longer able to be used for medicine and therefore it was gathered up and thrown over the left shoulder in order to blind the evil spirits that were said to constantly follow people around.

There is even older reasoning behind the spilled salt superstition. In the da Vinci painting of the Last Supper, Judas Iscariot is portrayed as having knocked over the salt. This led many to see the spilling of salt as a bad omen and something that was likely to cause bad luck. Salt was known to make soil barren for a long length of time, and this is the basis for the belief that spilling salt is akin to cursing the land.

The Romans had their own beliefs about salt. They believed that it was a symbol of friendship because of its lasting quality. However, it was very expensive and useful for preserving food, so if someone spilled salt on the table it was considered to be very ominous. In contrast, it was considered propitious to spill wine on the table.

Over the centuries there have been numerous accounts and writings from historians that relate the bad omens associated with spilling salt. In addition, since the Roman Catholic Church used salt to make Holy Water, it also had a religious significance which made spilling it a bad omen.

One prevalent superstition in medieval Britain was the fear that a child could be taken and replaced with a changeling. Today this is believed to have arisen out of a need to explain child illnesses that came on suddenly or children that were born with deformities. One of the stories of the changeling comes from the tale of a blacksmith who noticed one day that his son suddenly became lethargic and was wasting away.

The blacksmith was told that his son was taken and replaced with a changeling. To prove it he was told to put water into empty eggshells and place them around the fire. The child then sat up and spoke in the voice of the changeling stating he had lived for centuries and had never seen something like that. The blacksmith then threw the changeling into the fire. The man journeyed into the land of the fairies with his bible and the fairies, unable to harm him due to the Bible, returned his son.

There were a number of strange tests that people performed to try and see if their child was a changeling. They typically involved doing something so strange that it would draw the changeling out in surprise. One test was to place a shoe in a bowl of soup, if the baby laughed it was a changeling. Also making bread inside of eggshells was said to be so amusing to changelings that it would cause them to expose themselves. Even as late as the 19th century, the belief in changelings prevailed.

Some scholars have suggested that changelings may have been used as a way to explain autistic children, especially since the changes can come on quickly. When a child’s behavior and verbal skills rapidly declined or changed, it was blamed upon the doings of the changeling.

History – What’s So Unlucky About the Number 13?

Grunge – The Mythology of Balder Explained

Google Arts & Culture – 18 Superstitions from Around the World

University Of South Carolina – How Did the Superstition That Broken Mirrors Cause Bad Luck Start And Why Does It Still Exist?

How Stuff Works – Why Are Horseshoes Considered to Be Lucky?

RD – Why Do People Say “Bless You” After Someone Sneezes?

How Stuff Works – ‘The Last Supper’: The Masterpiece Leonardo Didn’t Want to Paint

Tutorial Point – Is Spilling Salt Believed To Be A Bad Omen And Bring Bad Luck?