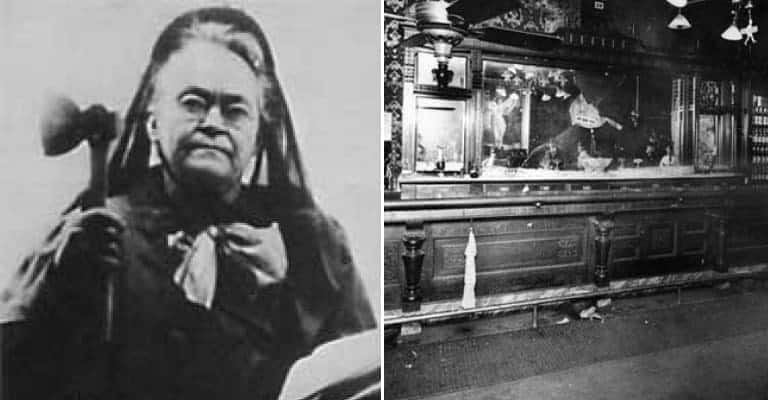 Carrie Nation was 6 feet tall; she stood out more than most women of the age. While she was living in Medicine Lodge, her and fellow members of the WCTU stood outside of the bars praying and singing loudly. The humiliation they imposed upon the bar patrons turned out to be bad for business and soon, Medicine Lodge’s bars were closed. Nation reported to friends and family that God spoke to her and told her to go to Kiowa, Kansas to close the bars there.

In 1900, Carrie Nation left for Kiowa. Instead of standing outside the bars simply singing and praying loudly, she began to throw bricks. This 6 foot woman was hurling bricks through street-side windows of Kiowa’s bars. The glass shattered and patrons fled. Fearful for their lives, bar patrons did not return and they drinking establishments shut down. Carrie Nation had won a victory for God and for the abandoned and beaten women of Kiowa whose husbands and fathers preferred the drink over their own families.

After the bars shuttered in Kiowa, Carrie did not move to Wichita and Topeka. As she preached in her booming voice, a passerby handed the tall woman a hatchet. Her new weapon was rarely far from her and she used it to smash windows in what the newspapers were calling “smash ups.” Using such destructive tactics made her a target of ridicule.

Carrie Nation was arrested and jailed numerous times. She was spit on and cursed at, yet never wavered from her stance that alcohol was the cause of all evil. Members of the Kansas WCTU loved Carrie’s tactics. They awarded her a gold medallion that was inscribed, “To the Bravest Woman in Kansas.”

As Carrie focused on her mission to rid her corner of the world of alcohol, her marriage fell apart and she divorced. Left without finical support, she sold small pewter hatchets. The novelty items sold relatively well and combined with the income she made from speaking engagements, Carrie was able to save money. In an ironic twist, she earned the respect of a black politician and bar owner who published Carrie’s first newspaper, The Smasher’s Mail.

Carrie Nation garnered numerous followers during her “smashing” activism. People wrote to her and she replied with advice on how to win against the saloon owners. She began a new publishing venture, a magazine entitled The Hatchet. She included letters from women in the field, supporters of her cause, and she even offered parenting advice. A large part of the magazine’s editorial and reporting was devoted to the evils of distilled spirits and the need for women to earn the right to vote.

In 1903, Carrie Nation officially change the spelling of her fist name to Carry. She proclaimed that her name was meant to “Carry A Nation for Prohibition.” Encouraged to tell her story, she published an autobiography entitled, “The Use and Need of the Life of Carry A. Nation.” The book was a financial success for Nation and she was able to purchase a house in Kansas City, Kansas where she housed women and children that had been abused by their drunk husbands and fathers.

Carry Nation was a controversial figure. The tactics she used to close bars horrified many. Yet, Nation’s message of prohibition resonated with thousands of women and children that had been victimized by drunk husbands and fathers. In a world where women had no vote and very few legal rights, Carry Nation advocated for women’s suffrage. She believed that women and mothers in particular needed the vote so that they could participate in the democratic process of implementing change. She proclaimed that “The loving moral influence of mothers must be put in the ballot box.”

After years of speaking engagements and activism, Carry Nation was exhausted. She moved to Eureka Springs, Arkansas where she purchased a house. Again, her house was large enough to house herself and several other women who had been victimized by their drunkard husbands. At a lecture in Eureka Springs in January 1911, Carry Nation collapsed. She died on June 2nd and was transported to Belton, Missouri and buried next to her mother.

Carry Nation gained national attention for the temperance movement and women’s suffrage. After her death, the Eighteenth Amendment to United States Constitution passed and was ratified in 1919 prohibiting the sale of alcohol. A year later the Nineteenth Amendment granted women the right to vote. In 1933 the United States Constitution was changed again. This time Carry Nation must have rolled over in her grave for Prohibition ended with another constitutional amendment. Carry Nation’s home in Medicine Lodge, Kansas is listed on the National Register of Historic Places.