The Butcher of Prague: 7 Facts About the Life of Nazi Reinhard Heydrich 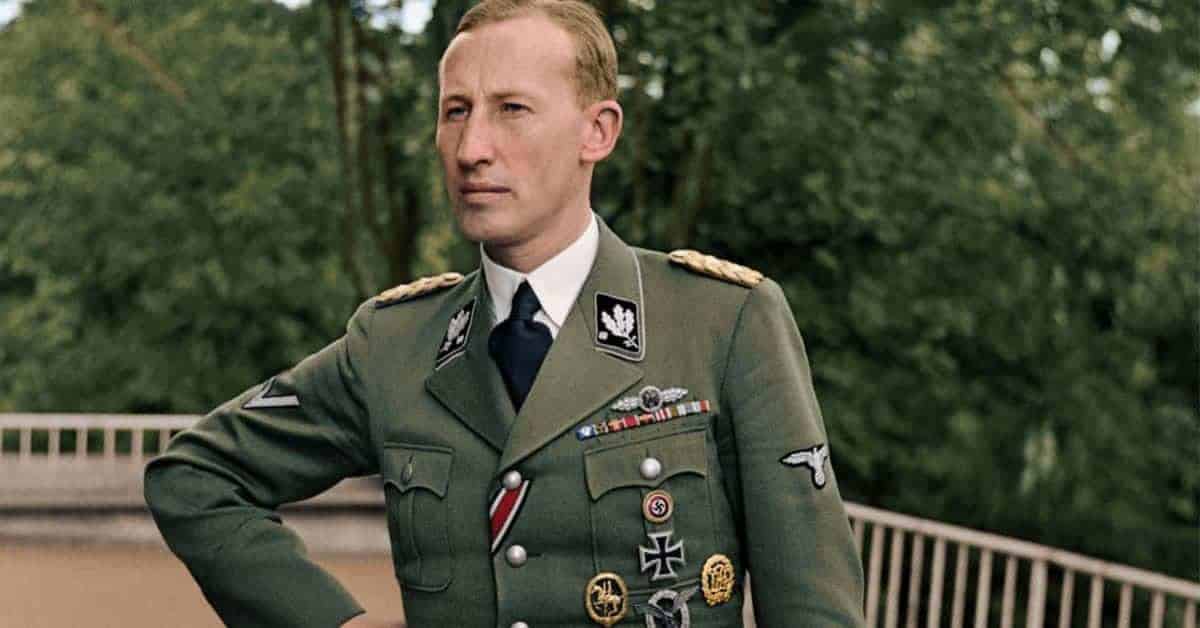 The Butcher of Prague: 7 Facts About the Life of Nazi Reinhard Heydrich

3 – Himmler Cancelled Their Initial Appointment but Heydrich Showed Up Anyway

Heydrich refused to take any job he deemed ‘beneath him’ and yearned to take up a role that placed him back in uniform. Von Osten was a member of the Nazi Party and suggested that he look for employment with the group. In 1931, Heinrich Himmler was setting up a counterintelligence division of the SS and agreed to interview Heydrich upon a recommendation from Karl von Eberstein who was a friend of von Osten’s.

Himmler canceled the meeting at the last minute, but Heydrich’s fiancée would not take no for an answer and ignored the message. She packed Heydrich’s suitcase and sent him to Munich. He met Eberstein at the railway station and was brought directly to Himmler who agreed to take the meeting after all. Himmler asked the interviewee to provide him with some ideas on how he would develop the intelligence service. Heydrich drew upon his love of detective and spy novels and, despite his lack of real-world experience in the field, he deeply impressed Himmler who reportedly hired him on the spot.

By the standards of the time, the monthly salary of 180 Reichsmarks (equivalent to $40 at the time) was low, but Heydrich accepted because von Osten’s family supported the party, the nature of the role appealed to him, and perhaps he realized that the group was on an upward curve. Within a year, his monthly salary increased to 290 Reichsmarks, and by 1938, he earned over 1,400 Reichsmarks a month which was a very high wage compared to the average.

Heydrich did not waste any time acclimating to his new role which he began on August 1, 1931. His office was at the Nazi Party HQ in Munich called Brown House. Within a few months, he had created a list of informants and spies. Heydrich loved gossip and kept folders of rumors and details of the sexual activities and private lives of leading Nazis with a view to using the information for blackmail purposes.

Heydrich enjoyed a fast rise through the ranks of the Nazi Party as the SS Security Service was a success. He developed vast dossiers on individuals or groups that apparently posed a threat to Hitler and conducted internal investigations to find out everything he could on Nazi officers. Himmler rewarded Heydrich’s diligence by promoting him to SS Major in December 1931. By July 1932, he was an SS Colonel with solo control of the Security Service, and in March 1933, he became SS Brigadier General. It was an astonishingly rapid ascent as Heydrich hadn’t yet reached his 30th birthday.

However, it all nearly fell apart as he was continually plagued by rumors of his Jewish ancestry on his father’s side of the family. His grandmother on his father’s side was married for a second time to a man with a Jewish sounding name. His enemies took advantage by spreading the rumors. Wilhelm Canaris claimed he had documentation that proved Heydrich had Jewish heritage but never produced it.

At one point, Himmler considered kicking him out of the party. Hitler was impressed by Heydrich and told Himmler that it was best to keep the services of “a highly gifted and dangerous young man” who would be “eternally grateful” for being retained and “would obey blindly.”

Nonetheless, Heydrich was haunted by the constant rumors and consequently developed a hatred of Jews. He was also a deeply insecure person prone to bouts of self-loathing. On one occasion after returning home drunk, he saw his reflection in the mirror, shot it twice and uttered the phrase “filthy Jew.” Whatever anger he had towards himself, Heydrich took it out on others in the most brutal fashion.

Once the Nazis seized power in January 1933, they wasted no time in eliminating enemies. Along with Himmler, Heydrich oversaw the arrest of thousands of Communists, priests, trade unionists and anyone else who opposed the party. Soon, there wasn’t enough space in prison, so the Nazis set up a concentration camp at Dachau near Munich; it was designed for political prisoners.

The gates of the camp became famed for the phrase ‘work sets you free’ and the inmates were subjected to torture with many of them executed. The Nazis soon opened other camps at Lichtenburg, Sachsenhausen, and Buchenwald. Although Himmler became the leader of the newly formed Gestapo in April 1934, Heydrich was the main man as far as planning was concerned.

In June 1934, the duo, along with Hermann Goering, spread false rumors that the head of the SA, Ernst Rohm, was planning to take control of the Reich with his four million storm troopers. In an act of violence known as The Night of the Long Knives, Rohm and numerous SA leaders were murdered on the orders of Hitler and Heydrich had the job of drawing up the list of those to be killed. After the death of Rohm, the SS replaced the SA regarding influence.

Heydrich used his organizational skills to ensure the Olympic Games in Berlin in 1936 ran smoothly. By June 1936, Himmler had control of all Germany’s police forces and was effectively the second most powerful man in the Reich behind Hitler; Heydrich was probably number three. In 1937, the Gestapo had unlimited powers of arrest, and even the ‘crime’ of making a joke against the Nazis was punishable by a spell in a concentration camp.

The SD and Gestapo used blackmail, extortion, torture, and murder to destroy anti-Nazi sentiment and increase Heydrich’s personal power. He was now feared throughout Germany. Heydrich was very much a ‘behind the scenes’ operator and had no real friends. He forced SS men to come drinking and partying with him, and if a woman refused his advances, they could expect a visit from the Gestapo.

When Hitler decided to expand into Czechoslovakia, Heydrich came up with the idea to encourage the ethnic Germans in the Sudetenland region to join the Nazis as a means of destabilizing the area. The Czech government gave up control of the Sudetenland to Germany on August 1, 1938.

Heydrich’s evil deeds escalated, and he helped organize Kristallnacht on November 9/10, 1938. The ‘Night of Broken Glass’ involved attacks on Jews living in Germany and Austria. Synagogues, businesses and homes were attacked, and broken glass littered the streets. Hundreds of Jews died during these attacks and Heydrich ordered the arrest of 30,000 Jews who were sent to concentration camps. It was the beginning of the mass deportation of Jews and Heydrich had a major part to play in their extermination.

He convened the Wannsee Conference in Berlin in January 1942. This meeting involved 15 top bureaucrats from the Reich, and it was at this event that the idea for the Final Solution was coordinated. Heydrich said that the plan was to rid Europe of Jews from east to west. The Nazis wanted to kill all 11 million Jews in Europe and the Soviet Union. The first instance of mass gassing of Jews occurred in Auschwitz, Poland in the middle of 1942. Over 1 million people died at Auschwitz out of a total of 6 million Jews that died during World War II.

Meanwhile, Heydrich continued his plan to destabilize Czechoslovakia by inciting riots in parts of Slovakia and sending in a so-called ‘sabotage squad’ in January 1939. He was appointed Deputy Reich Protector of Bohemia and Moravia in September 1941 and set up his HQ in Prague. He cynically applied a carrot and stick approach in this role. On the one hand, he gave free shoes and food rations to workers and made the populace think he was helping them find work. On the other hand, he suppressed the black market and tortured and murdered members of the resistance movement.

While industrial output increased, inflation and food shortages were a problem. Heydrich’s apparent goodwill towards the people masked his real intentions. Ultimately, his goal was to get rid of up to two-third of the population via deportation to the Soviet Union or murder. The Ministry of Labour conscripted up to 100,000 Czechs and forced them to work anywhere in the Reich while their workday was increased from 8 to 12 hours. Heydrich was on top of the world, but once again, his arrogance came back to haunt him, this time with fatal consequences.

7 – His Death Led to the Execution of Thousands

Heydrich was effectively the dictator of Bohemia and Moravia, but instead of being security conscious, he openly flaunted his power. He routinely traveled between his country home and his HQ in Prague in an open top green Mercedes with no security attachment. Heydrich believed he was untouchable and that the local population was too frightened to try anything. He was sorely mistaken.

On May 27, 1942, his car had to slow down as it came around a bend near Prague and suddenly, two resistance fighters, Jan Kubis and Jozef Gabcik, attacked the car. Gabcik tried to shoot Heydrich with his sten gun but the weapon jammed. Heydrich foolishly told his driver to stop when he had the chance to escape, and Kubis used the opportunity to throw a grenade at the car. Although wounded by the explosion, Heydrich chased Kubis and tried to shoot the injured Czech. Kubis escaped on his bike and Heydrich collapsed after chasing the would-be assassin for half a block.

At Bulovka Hospital, it was revealed that Heydrich suffered severe injuries to his spleen, diaphragm and one of his lungs. A doctor decided to perform surgery immediately, and Heydrich received multiple blood transfusions. Initially, he seemed to be recovering and even received a visit from Himmler on June 2. However, he fell into a coma soon after and died on June 4, 1942. There were two funerals; one in Prague on June 7 and another in Berlin on June 9. Hitler gave the eulogy and placed Heydrich’s medals and awards on his funeral pillow. Privately, Hitler blamed Heydrich’s stupidity for his death.

Even in death, Heydrich caused carnage. The Gestapo and SS hunted down anyone suspected of involvement in the assassination. Over 1,000 died during these recriminations, and in addition, 3,000 Jews at Theresienstadt were executed. Finally, 500 Jews were arrested in Berlin and 152 were executed on the day of Heydrich’s death. A traitor in the Czech resistance revealed the location of the two assassins and several other operatives, and after being surrounded in a cathedral in Prague, the surviving members of the resistance committed suicide in the church’s crypt.

Even now, the Nazis were not finished punishing the Czechs. After receiving a fake report that people in a town called Lidice were involved in the murder, Hitler ordered the town’s liquidation. All 172 males in the town aged 16+ were executed, and the females were sent to Ravensbruck concentration camp where most of them perished. The village was destroyed and leveled; then the Nazis planted salt over the soil. Overall, a total of 13,000 people were arrested, deported and sent to camps in the aftermath of Heydrich’s death.