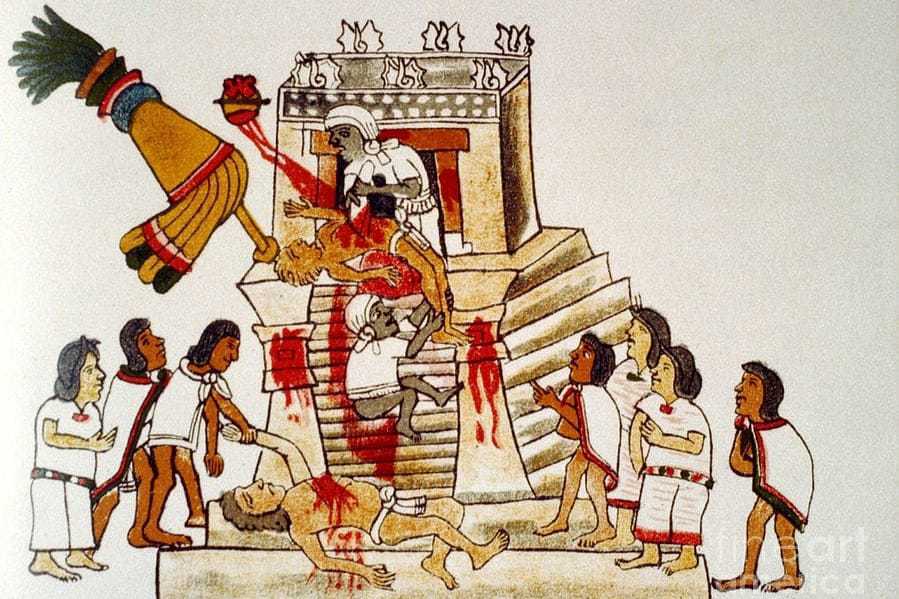 Though some types of sacrifices were rare, for example, only one representative of Tezcatlipoca was killed per year, many others were a daily occurrence. For special occasions, tens of thousands could be killed in a single day. The celebration for the re-consecration of the Aztec grand temple reportedly saw 80,000 sacrificed within a week. Surely a high estimate but even the lower ranges are astounding.

That said, we can only look in awe at the sheer scale of the sacrifices brought about by the Aztecs and other Nahua followers. The terrible reign of the Inquisition in Europe lasted over 350 years. A high estimate on the number of dead, that includes unofficial sources and counts those who perished in prisons waiting for trial, is given as 125,000.

Officially only 2-3 people were sentenced to death per month during the Inquisition. Though even cursory looks at the methods of torture and execution put the killings on the same morally horrifying level as the Aztec sacrifices. Looking at witch hunts throughout hundreds of years in Europe and America, we get average estimates of 40-50,000 dead with extremely high estimates of 100,000.

With Aztec sacrifices, we get low estimates of 20,000 killed every year. In 15 years the lowest estimate of Aztec victims would see more dead than the highest estimates for the inquisition and witch hunts combined. Sticking between the low of 20,000 and the high of 250,000 per year, the Aztecs and the followers of the religion would claim tens of millions of lives throughout their existence as a major power in Mexico.

Though horrific, we can at least understand why the Aztecs and related tribes had such practices, it was literally so that the sun may rise, and the rains may fall. It was a matter of surviving a hostile world with demanding gods. Compare this to other evils of the word; Hitler knew exactly what he was doing when he instituted the Holocaust, his evils were motivated by hate. Compare that to Stalin who murdered millions in systematic purges. His motivation was pure power.

Comparing the evils of civilizations is not an attempt to demonize one culture or race or prove either was better, but bringing such evils to light helps further one of the most important functions of history; learning to not repeat the worst parts. We are ever watchful for the next “Hitler” (and wary of dictatorships in general) because we know just how much death and destruction the ideas of one man can bring.

While looking for lessons in an abandoned sacrificial polytheistic religion might seem comical, remember that just last year Greece officially recognized the revival of the polytheistic Hellenic religion including Zeus, Aphrodite and all the others previously only studied as myths.

History on the Net: how many were killed as human sacrifices?