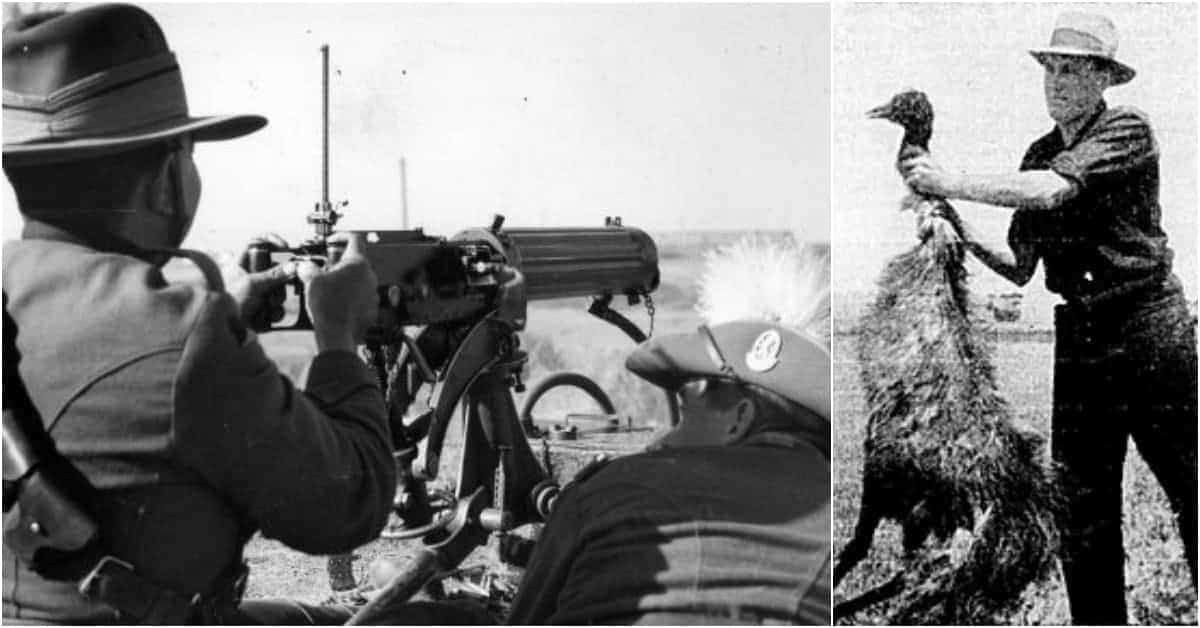 Yes, you read that right, and you may have heard of this interesting piece of history before, but here is the full story. To clarify, there was no official declaration of war, but soldiers were mobilized and sent out with machine guns to fight against Emus, and contemporary politicians and reports often dubbed this engagement a “War” with an emphasis on the quotes.

While this sounds outrageous, there were a couple of good reasons and some terrible ones as to why British troops got involved, and no major wars were occurring so troops could be spared to fight the mighty Emu “armies.”

While Australia started as a penal colony, the massive amount of land soon became the retirement goal of many Brits. Even though the land wasn’t always the best quality, a retired soldier could snag quite a hefty chunk of it, significantly more than he could in England. Many former troops settled around Campion in Western Australia, about as far inland as you could get before hitting desert.

It was a tough living for the farmers here, made even more difficult by demands for wheat to feed the starving victims of the Great Depression. The government promised subsidies for farmers to grow extra wheat for food, but the price of wheat plummeted and promised subsidies never came.

The farmers were at their wit’s end, but they would still have more hardships to come. What the farmers didn’t know was that they were about to be visited by one of the worst plagues of pests since the rabbit invasion.

Furius Farmers, a Cheap Government, and Some Hungry Birds

Australia had an invasion of rabbits brought by the first fleets to set up the penal colonies, made worse by settlers bringing rabbits to hunt for sport. Rabbits were an invasive non-native species that were extraordinarily well suited to the climate, and while there were plenty of natural predators, the rabbits had enough food to outbreed any threat.

In response to the exploding rabbit population devastating crops and eroding topsoil, a massive rabbit-proof fence was erected that extended over 1,000 miles north to south, coast to coast, with another 1,000 miles of forked-off fences. This fence combined with rabbit hunting, wide-scale poisoning efforts and other containment methods to give farmers some room and safety to grow.

The equation changed when the emus began migrating. Generally, after their mating season, emus would migrate to the coast where there was access to more food and water. On their way, the emus noticed that these farms around Campion had plenty of food and even water. Why bother going to the coast when they had all that they needed.

Yes, emus are just birds, surely, they just needed to be treated like any other pest, right? Well, not when there were 20,000 of them descending on Australian farmland. An emu weighs around the same as an adult human, and they have deceptively powerful legs with large, sharp claws. In short, emus could and occasionally did attack and seriously wound or humans. Their powerful legs also easily tore gaping holes in the rabbit fences, reintroducing hordes of rabbits.

Finally having enough, the farmers petitioned the Western Australian government to do something. Their response was so bizarre that the contemporary media couldn’t get enough of it. A small group of soldiers was sent in with machine guns with the purpose of stalking up to emu flocks at watering holes and gunning them down.

The machine gun, a Lewis Gun, was still a new and impressive weapon of war, and the thought was that huge swaths of birds would be taken out at a time, both culling the numbers and giving farmers a substantial demonstration that their government was doing something to help them.

The first wave of a handful of troops was unsuccessful, but farmers wanted something to continue, so reports of hundreds of dead emus began circulating, prompting a second wave to be sent in. the army reportedly argued that the “war” would be good target practice for troops in a period of relative peace, running targets and practical experience with machine guns.

The argument that it was a propaganda move to appease the farmers holds more weight as a cinematographer was hired and films were made glorifying the “war” and exaggerating its success. A last excuse to go forward was for the army to collect emu skins and feathers to use for the uniforms of British cavalry.

As it turns out, this comical plan was a great case of “easier said than done” Emus are used to being prey, and so default to running and scattering in the face of danger, and a firing machine gun sounds dangerous enough. Emus also have one of the worst body types for shooting.

A round body is the only viable target, too high or low and the slender neck and legs are very unlikely to be hit. At 150 pounds with dense feathers, some emus could even survive a shot or two in the right circumstances.