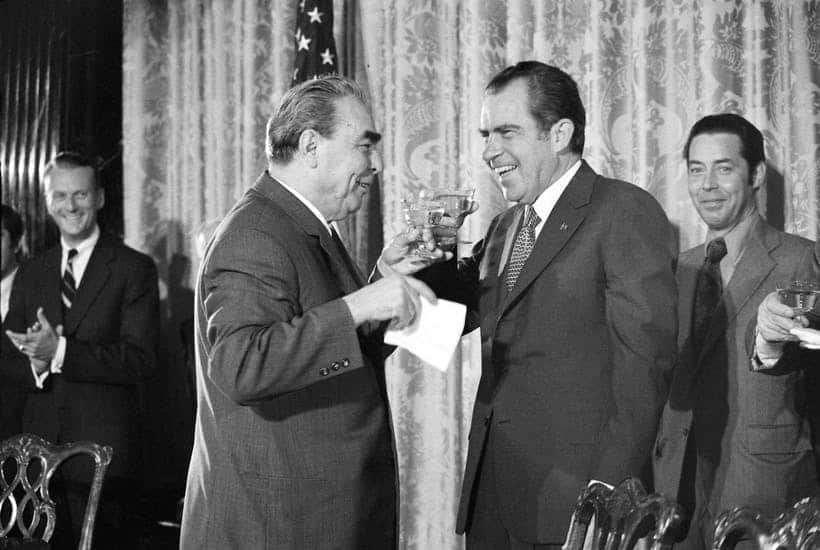 And, finally, there’s a prime example of what might have been. As the past incidents have shown, alcohol and power don’t always go well together. They’re an especially bad combination when the drinker in question holds the most powerful position on the planet and is capable of starting a nuclear war. According to several of his biographers, President Richard Nixon came close to nuking his enemies in a drunken rage. Thankfully, his aides were wise to his booze-fueled moods and all-out war was averted.

Henry Kissinger, a key figure in Nixon’s White House, long ago revealed that his boss at the time was partial to heavy liquor. Moreover, the President also had a tendency to overreact. “If the President had his way, there would be a nuclear war every week,” Kissinger famously recalled. In one infamous incident in 1969, North Korea shot down an American spy plane. Nixon, fueled by alcohol, summoned the Joint Chiefs. He ordered them to draw up a list of possible targets for a nuclear bomb. Kissinger, who was asked to relay the message, urged the Joint Chiefs to stall. The tactic worked. The morning after, Nixon had sobered up and calmed down.

But this was by no means a lone incident. When he was drunk, Nixon would regularly get aggressive and seek to use the full extent of his powers as Commander-in-Chief. On one occasion, even a conversation about Cambodia led him to get on his phone and demand the Asian country be bombed. Nixon’s staff became even more worried as his Presidency wore on. As their boss became depressed and withdrawn, there were fears that he would reach for the big red button.

Tellingly, in his memoirs, Nixon’s Defense Secretary James Schlesinger revealed that he ordered all military commanders to question any nuclear launch order that came from the President himself. Nixon’s increasing dependence on alcohol was the prime reason for such extreme caution. In the end, Nixon was forced out of office as a result of the Watergate scandal. As a nice footnote to history, in his final hours as President, he was barred from carrying the nation’s nuclear launch codes. Instead, they remained safe in the White House while he boarded a chopper out of DC.

If it weren’t for one day of youthful, drunken foolishness, William Adelin would have grown up to become King of England. As it was, he died at the age of just 17, drowned off the coast of Normandy, France. And, while many princes are murdered by their enemies or rivals, young William had only himself to blame for his early demise. His death caused a succession crisis in England and almost caused a huge war. So, how did all this come about?

According to observers of the time, William was a very pampered young man. The son of King henry I of England and Matilda of Scotland, he was made Duke of Normandy, even if the title was largely symbolic. Then, as was the custom, he was married off to Matilda of Anjou, a union that would bring England and Normandy closer together. That was why, on 25 November of 1120, William and his closest men were in Normandy, preparing to cross back over the English Channel. But first, they decided to stay on the beach and have a few drinks. After all, William reasoned, his vessel, The White Ship, was by far the fastest in the King’s fleet. They would easily be able to catch up with the rest of the ships.

The story goes that, upon getting ready to finally leave for England, two holy men blessed the boat. William threw them off, fearing they would ruin the party vibe. He carried on drinking, even sharing his booze with the crew. He urged them to speed up and try and catch the other ships in the fleet. Unsurprisingly, it wasn’t long before disaster struck: The White Ship hit a rock and started taking on water.

To his credit, William might have lived to tell the tale. He made it onto a dinghy but then turned back to rescue his half-sister, Matilda FitzRoy, the Countess of Perche. However, both of them, along with all but a couple of the crew, drowned. William’s death King Henry, who had no other legitimate sons to be his heir, had to navigate a succession crisis. Eventually, he chose his nephew, Stephen of Blois, to take the throne. Tellingly, however, this ushered in a period in English history known as â€˜The Anarchy’, from 1135 to 1153. It would be more than 20 years before law and order would return to the land – all because of an evening of drunken, youthful tomfoolery.

“What Happens If the President Gets Drunk?” Time Magazine, June 2016.

“Pour One Out for Ulysses S. Grant”. Adam Gopnik, The New Yorker, October 2017

“The Battle of Stones River”. The National Parks Service, nps.gov.

“Commandaria: The fame of the praised wine for kings”. Cyprus Wine Museum.

“Drunk in charge: Extracts from The Arrogance of Power, the Secret World of Richard Nixon.” The Guardian, September 2000.

“Diodorus on the Sack of Persepolis”. Livisu.org.