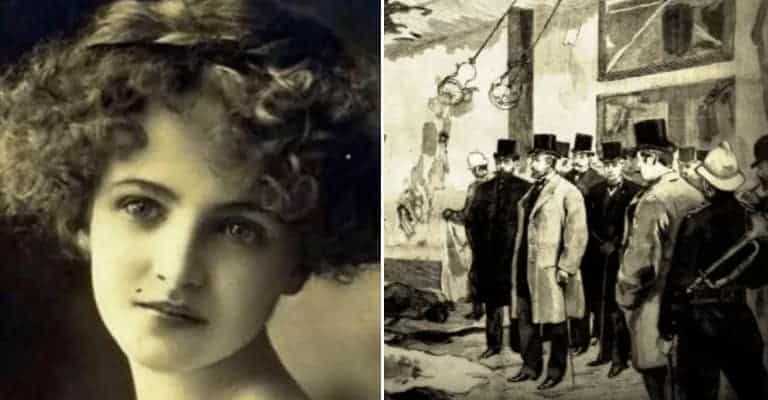 In 1901, an anonymous letter arrived at the Poitier police station that a young woman was being held captive in 21 Rue de la Visitation. The police showed up to the house to investigate, and when they knocked on the door, no one answered, even though they could hear movement from the inside, and see the flutter of curtains moving as Madame Monnier peeked out the window. They decided to break in, and searched every room for this captive woman. When they opened the attic door, they saw the skeleton-like Blanche Monnier.

She is now 50 years old, and had not seen daylight for 25 years. Blanche was totally naked, and she hid her body and face under her blanket, because the sunlight was too much to handle. She was terrified and completely deranged. She only weighed 55 pounds. One of the police officers wrote in his statement, “We immediately gave the order to open the casement window. This was done with great difficulty. The old, dark curtains fell a heavy shower of dust. To open the shutters, it was necessary to remove them from their hinges.”

Blanche had been lying on a straw mattress that had gone rotten, and she was lying in her own filth. Crumbs of food and bugs were all over the floor. The smell was so bad, the police officers didn’t want to go inside to investigate. Blanche was taken to the Hotel-Dieu Hospital, and doctors thought she was going to die, well because she was so thin. The nurses gave her a bath, and she kept saying how lovely it was to being clean, and how thankful she was to be free. It was still difficult for her to be in the sunlight, because of her sensitivity.

When the police were raiding her home, Madame Monnier was sitting in her living room, completely calm. Her brother was still living in the house, which clearly shows that his mother had also manipulated him from moving out and having his own life, even well into his 50’s. But he tried to claim that Blanche brought this all upon herself.

When he and his mother were brought to court, Marcel testified that Blanche was an angry woman who was full of rage. (Wonder why?!) And that they believed she was mentally ill. He said that only a crazy person would choose to stay in solitary confinement over agreeing to break up with someone, and this was why they kept her locked up. They figured that she must be crazy, and deserved to be imprisoned. He also tried to claim that she never even tried to escape the room, and that after they locked her in there, she simply accepted her fate and decided to stay.

Obviously, this was no true. An entire group of policemen had to work together to take down the shutters from the window, and there was no way the weak and starving Blanche could have done that on her own. Neighbors came to testify at the trial, claiming that they thought they could hear the screams of a woman shouting “police!” out of the blocked window. This is most likely where the anonymous letter came from. Someone probably noticed the screams that continued on for 25 years.

Blanche also never acting violent or lashed out at any of the doctors or nurses. She was calm, and very grateful to have been saved. Tragically, she never got to see her lover again. He had died in 1885.

Her mother was found guilty of her crimes, and she was sent to jail. But she was so old, she died only 15 days after her capture. Her brother was given a sentence of a year in jail, but he was a lawyer, so he knew how to protect himself. He appealed the charges, and was able to go free.

Blanche was able to put on some weight at the hospital, but after being in solitary confinement for 25 years, they say she had lost her mind. She also had nowhere else to go. She was 50 years old, and could not very likely find a husband and move on with her life, and she sure wasn’t going to move back in with her brother. She was sent to live in the Blois Psychiatric Hospital, where she died in 1913.

Looking back, some people debate whether Blanche Monnier was truly insane or not. After all, she could have lied to her mom for the sake of getting out of the room, and then she could have run away with her boyfriend. Others believe that she was perfectly sane before going into the attic, and the solitary confinement drove her to become insane in the dark. There have been studies to theorize that Blanche was showing signs of bad behavior long before the incident, but much of it could be chalked up to teenage angst and rebellion.

While this is a shocking case of abuse, it begs the question- how many women were put into similar situations, only for them to cave within 24 hours and agree to break off a relationship? How long had violence and torture been used to oppress women from making their own choices? Since these family matters always happened behind closed doors, we really may never know.

How Marriage Has Changed Over Centuries. The Week. January 11, 2015

The Story of the French Socialite Who Was Locked Away For a Quarter of a Century, 1876. HistoryDaily. 2016.

The Woman in the Attic the True Story of Blanche Monnier. Jennifer Morgan. 2017