A German Woman Took the World's First Road Trip in 1888 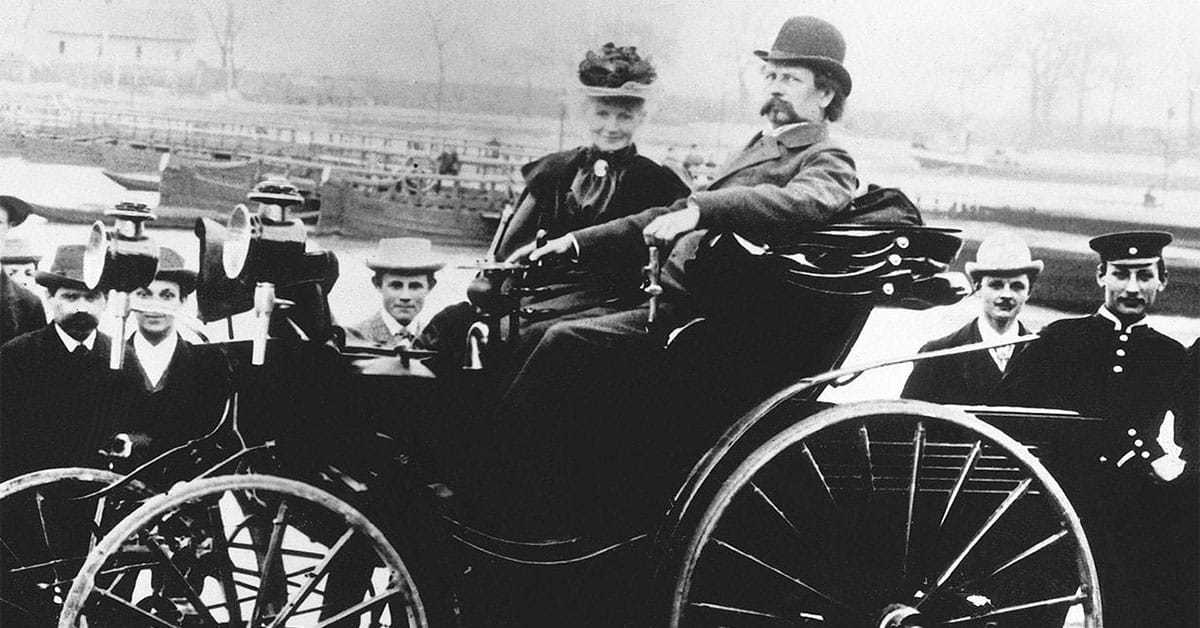 Most of us know the name of the first man to walk on the moon. We might also be familiar with the first men to fly an airplane, cross the Atlantic, or circumnavigate the globe. Less well-known is the name of the first person to take an automobile out of the workshop and give it a serious test drive. We should remember Bertha Benz, though, because during her 1888 trek across the German countryside, she showed the world what the automobile was capable of, and along the way even came up with a few new modifications to the vehicle that we still use today.

Bertha was the third child of the Ringer family, a well-to-do household in the town of Pforzheim in what is today Germany. On the day that she was born in early May 1849, he mother wrote in the family bible “unfortunately a girl again.” Bertha would later discover this bit of commentary, and said that she became determined to prove to her mother “that even a girl could do something that was extraordinary.”

Determined as she may have been to prove herself, as far as her family was concerned her main responsibility was to find a respectable husband. They even provided her with a generous dowry so that she might attract the right sort. When she was twenty Bertha met Karl Benz during an outing with a local club. While he may not necessarily have been what her parents imagined, Bertha was taken by him. He was brilliant and driven, having matriculated from University of Karlsruhe with a degree in mechanical engineering while still in his teens.

On top of that, he was handsome and knew how to dance. Still, he had his share of struggles. He had been bouncing between engineering jobs for years, and unlike Bertha, he did not have a wealthy family to fall back on in lean times.

During their courtship, Karl shared with Bertha his idea for a motor-powered carriage. All the same, for the time being, this remained little more than a pet project for Karl. Of more immediate concern was a new venture that he was about to embark upon with his friend August Ritter, the Mannheim Iron Foundry and Mechanical Works.

When the business struggled in its first year Bertha stepped in and used a portion of her dowry to buy Ritter’s share in the company, keeping it afloat. After the couple married in 1872, the two of them would live off of what remained of the dowry for a time, while Karl perfected his design for a two-stroke gas engine. During the next ten years, he would patent the new engine, along with other innovations such as the spark plug, the carburetor, and a gear shift system.

Producing this kind of high-end machinery, though, required more capital than the Benz family could muster. They found new investors to keep the shop running, but the price had been high. Karl retained only five percent of the company and lost creative control. In 1883 Bertha and Karl would leave the business they had started and go looking for new opportunities.

Karl found fresh business partners in Max Rose and Friedrich Esslinger, two men who ran a bicycle repair shop in Mannheim. Together they formed a new firm, Benz & Cie., producing gas engines. The company’s quick success freed Karl to throw himself into the project that he had been aiming at since before he met Bertha, the development of an autonomous gas-powered vehicle.

In 1885, Karl completed his first prototype of the Benz Patent-Motorwagen. The contraption ran on three wire wheels with rubber tires, not unlike those of the bicycles that Rose and Esslinger worked on, and was controlled by a crank-operated rack and pinion steering system. There was no gas tank. Instead, fuel was simply poured directly into the carburetor. The engine, mounted behind the driver, was Benz’s new single-cylinder four-stroke design. It got about twenty-five miles per gallon and could produce a massive two-thirds of horsepower, though Benz would upgrade it to 2.5 horsepower in subsequent models.

While the Benz Patent-Motorwagen would eventually drive nothing short of a revolution in transportation, it did not initially receive much recognition. Despite being a masterful engineer, Karl did not know how to engage with the public imagination. He was also a perfectionist, reluctant to allow anyone to see his creations until he deemed them to be perfect. This tendency was exacerbated by a disaster during one of the few demonstrations that Karl did allow, in which the driver of the Motorwagen ran the vehicle into a wall.

While Karl may have lacked confidence, Bertha was convinced that the world would embrace the new automobile if they could just have a look at it – see that it was a practical tool for everyday life. She resolved to take the Motorwagen for an extended trip in order to stress test it and drum up publicity. Realizing that Karl was too protective of his invention to ever allow such a trip she elected not to tell him about it.

So in the early morning of 5 August 1888, Bertha gathered up her two sons, Richard and Eugen, and together the three of them rolled the automobile out of the workshop and far enough away from the house that they would not wake up Karl when they fired up the ignition. Bertha did leave Karl a note so that he wouldn’t worry too much, telling him that she had taken the boys to visit her parents in Pforzheim.

Making the sixty-mile trip to Pforzheim, though, was not as simple as pointing the Motorwagen in the right direction and pressing the gas. The roads along the way had not been designed for automobiles. They were muddy and rutted, a difficult environment for a vehicle that had never before been taken off the shop yard. Hills proved challenging to the 2.5-horsepower engine as well. A few times Richard and Eugen had to get out and push the Motorwagen up particularly steep inclines, and at one point they even had to conscript some farm boys that they came across in order to summit a hill.

While the terrain was tough, the biggest challenge was just keeping the vehicle running. A primary concern was finding fuel. They had departed from Mannheim with a little over a gallon of fuel in the carburetor, but they would have to find more along the way. Fortunately, the Motorwagen could run on ligroin, a solvent commonly sold in apothecary shops.

Bertha planned her route accordingly, passing through small towns along the way where she might acquire the stuff. At her first stop in Wiesloch, Bertha bought the pharmacy’s entire stock of ligroin, despite the chemist’s protestations that she would only need a small amount to clean her soiled and stained dress.

A second concern, after fuel, was water. The Motorwagen’s engine was cooled by means of an open thermosiphon system, dissipating heat by evaporating water. As a consequence, the auto drank water even faster than fuel. Bertha and the boys stocked up on water whenever they stopped, but also occasionally had to search out streams and brooks in the countryside to prevent the Motorwagen from overheating.

The final obstacle on the trip was maintaining the delicate mechanical components of a vehicle that had never before been driven more than a few hundred yards. Bertha had an intimate understanding of the workings of the Motorwagen, and proved to be quite resourceful in solving mechanical problems on the fly. When a fuel line became clogged, Bertha used her hat pin to clear the obstruction. Further along in the trip, the ignition failed when exposed wires short-circuited the system. She remedied this by wrapping her garters around the offending wires, thereby insulating them.

In two instances Bertha had to seek out the help of local craftsmen to get the Motorwagen running again. When she discovered that a chain had broken, she enlisted a blacksmith from a nearby town to fix it. Near the end of her trip, she determined that the brakes, which were made of wood, were beginning to fail from continued use. She sought out a shoemaker to nail strips of leather to the brakes, thus inventing brake pads.

Bertha and her sons arrived in Pforzheim just as the sun was setting, and Bertha sent Karl a telegram letting him know that they had made it. He may have been put off by the impromptu trip, but he would incorporate the lessons that Bertha had learned into his design, adding the brake pads and new lower gear for climbing hills. More importantly, the sight of a woman and her two children passing through German villages in an automobile sparked the attention of the press and the story spread. Orders for the Motorwagen started pouring in, and soon Benz & Cie. would be putting six hundred automobiles on the road every year.