The 1866 Irish Invasion of Canada 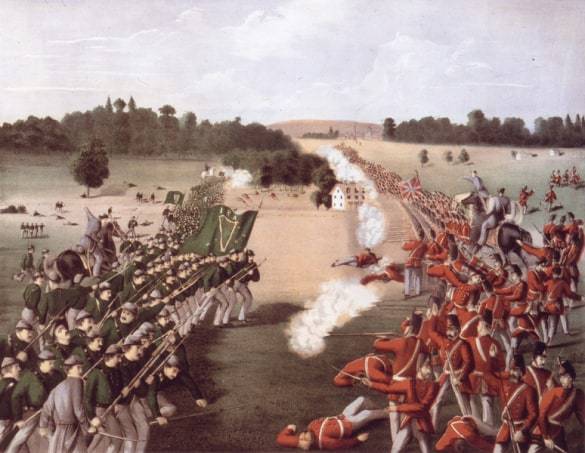 The 1866 Irish Invasion of Canada

In the years immediately following the Civil War, the United States went through a vast amount of changes. As the country was rebuilding itself and its people were recovering from war, the United States showed itself as a potential major player in diplomatic relations between England and Ireland during a time of great hostility between the two.

The Great Potato Famine caused great suffering and starvation among the Irish people. The British, who occupied Ireland at the time, did nothing to ease their pain. Many Irish emigrated to America to escape the famine and British rule; when they got here, they experienced second-class citizen status.

The tense relationship between the British and the Irish affected American Irish and Irish immigrants in many different ways. Most just wanted to ignore it: they left Ireland for a reason, and they wanted to attempt to live in peace in their new home. Their lives were hard enough without worrying about what was happening at home. Others were angry: they still felt pride in their Irish heritage, and the British treatment of their homeland hurt them. They wanted to take action, but what could they do from so far away?

Many of these angry Irishmen belonged to the Fenian Brotherhood, an Irish international Republican terrorist organization with branches in Ireland and the United States. The Brotherhood dedicated itself to freeing their mother country from British dominance, but they also had peaceful chapters that gave humanitarian aid to Ireland. The American branch of the Brotherhood did not take orders from the Irish branch, but they supported Ireland through their actions.

They searched for ideas to force the British to grant Ireland its independence. Since they were so far away, they couldn’t force the British to evacuate their mother country, but the Brotherhood came up with a brilliant idea to force Britain’s hand that was much closer to home. Canada was a valuable British possession at the time, located to the north of the United States. The Fenians decided that they would invade and conquer as much of Canada as they could and hold it hostage until the British agreed to leave Ireland. Once Ireland was returned to the Irish, the Fenians would return Canada to the British.

To prepare for their invasion of Canada, the Fenians launched a test-run invasion of New Brunswick with about 700 men in April 1866. After all, none of them had invaded a country before. They wanted to know how easy or how hard it would be. They successfully invaded the province, but it was very brief. They scattered just as quickly as they had arrived when the British warships showed up. The pre-invasion attack was a complete failure, but the Fenians were not disappointed. They continued with their plans and launched their invasion of Canada.

On June 1, 1866, a crew of men loyal to the Fenian cause damaged the USS Michigan, the gunboat safeguarding the intersection of the Niagara River between Lake Erie and Lake Ontario, which allowed the Fenian Brotherhood to cross into Canada. The Fenian force was small but lethal: there were only approximately 1,000-1,500 men who invaded Canada, but they were well-armed, and many of them had served in combat before. Since their numbers were so small, the Irish ensured that they brought massive artillery with them.

The weapons they carried weighed down the boats, so they had to dump some of them in the Niagara River during the invasion. The American Civil War had ended only the year before, so they were highly trained in marksmanship and strategic military exercises. Eventually, the U.S. Navy repaired the USS Michigan and halted the remaining invasion, separating the Fenians from their supplies; those who made it across the river prepared for battle.

Led by John O’Neill, the Fenian Brotherhood advanced to Ridgeway and lured the Canadian forces out to meet them for battle. Using his extensive military experience, O’Neill used a smaller force to draw the Canadians out. The Canadian troops were completely unprepared for combat with the Irish. Their formations were formal and rigid compared to the Fenian guerrilla warfare.

As the Canadians advanced and pushed the Fenians back, their lines disintegrated. The remaining Fenian troops, who were hiding in the trenches, overwhelmed them with bayonets, winning the battle. By the end of the charge, 22 Canadians were dead, and 37 were wounded. The Canadians withdrew from Ridgeway, leaving it to the Fenians.

Lacking the support to hold the town, the Fenians also withdrew, choosing instead to take Fort Erie. The Canadian soldiers of Fort Erie, outnumbered but brave in their defense, lost the fort to the Irish. In the end, the Fenians captured the fort, setting themselves up for their occupation of Canada. Their success would not last.

The British and Canadian military joined forces and marched on Fort Erie, surrounding the Fenian Brotherhood. The Irish were now the ones outnumbered. Fearing for their lives and seeing that they were fighting a war they could not win, many of the Fenian Brotherhood abandoned O’Neill and returned to the United States. After losing half of his men, O’Neill and the rest of his men left the fort and returned to America as well.

As the American military took the Fenian Brotherhood into custody when they crossed onto U.S. soil, the Irish realized that the Americans and the British did not take them as seriously as they would have liked. American support for the invasion was unspoken: the United States did not acknowledge that the Irish had held the lands of a foreign power, no matter how briefly, but they did nothing to stop it, either.

The Americans never thought the Brotherhood would succeed because of their first failed invasion of New Brunswick, and they did not bother to keep them from launching a second attack into Canada. The British refused to acknowledge the Battle of Ridgeway at all because the Irish did not hold any land in Canada long enough to use it as a bargaining chip for the independence of Ireland, or for anything at all.

Even though the Irish invasion of Canada was internationally considered a failure, the Fenian Brotherhood did not give up hope of making their influence known to England and succeeding in proclaiming an independent Ireland. Although they continued to launch invasions into Canada, they were all unsuccessful.

The United States indulged their efforts, refusing to punish them severely and escorting them back to American soil when they launched an attack. The frustrated Brotherhood became more aggressive toward British rule in the coming years: a faction located in London detonated a bomb that killed or injured over 100 people to free one of their Fenian brothers.

Eventually, the focus of the Fenian Brotherhood changed from launching invasions into British territories to using violence to become enough of a nuisance to force England to deal with them. Their efforts had the opposite effect: instead of giving up and negotiating with the Brotherhood, the British began to resent the Irish and mistreat them more than they already did, which weakened the influence of peaceful independence movements in Ireland that were starting to gain ground.

While the Irish invasions of Canada divided many, it had a unifying effect on Canadians. Canada was still a British possession at the time, divided into separate territories without any sense of nationhood. After the Battle of Ridgeway and the ensuing invasions by the Fenian Brotherhood, the Canadians learned that the attacks could come at any moment and they had to rely on themselves to defend their territory swiftly.

They could not rely on British troops to come to their aid every time the Irish invaded because that kind of mobilization took time. By learning how to defend themselves by themselves without any outside influence, the Canadians developed a sense of self-preservation that contributed to its independence from Britain.