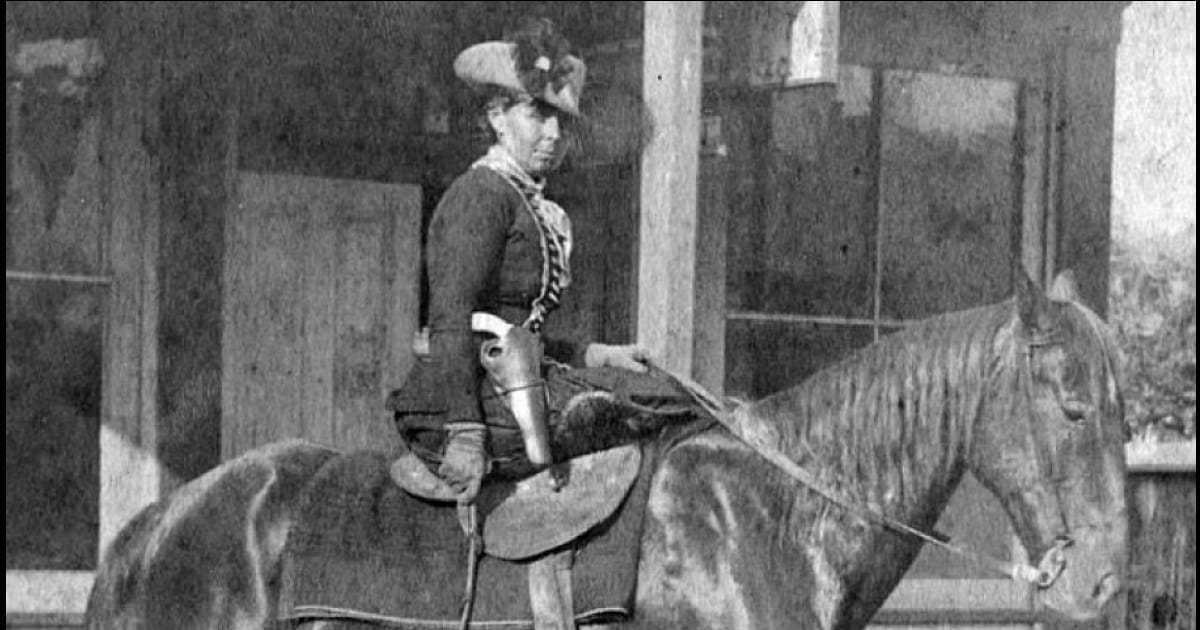 The archetypal gunslinger in the Old West was mean, grizzled and potentially deadly. While Belle Starr was certainly capable of violence, she had a very different appearance. Starr would ride through the towns of the Old West with two pistols strapped to her black velvet skirt, and she wore gleaming boots while still displaying feminine charm. There are a lot of legends attributed to the ‘Bandit Queen, ‘ but evidence suggests she wasn’t quite as active as first thought as fanciful tales added to her mystique.

Myra Maybelle Shirley was born in Carthage, Missouri on February 5, 1848, and was typically called ‘May’ by her family. Her family was prosperous by the standards of the era, and she grew up on a farm. Her father, John Shirley, sold the farm in 1860 and moved into the town of Carthage where he purchased a livery stable, inn, and blacksmith shop.

Belle’s upbringing was a million miles from what she became as she received a classical education and learned how to play the piano. She even graduated from the Carthage Female Academy although it probably helped that her father was involved in founding it. It seemed as if she was set for the good life, but the Civil War changed everything.

The American Civil War, which began in 1861, resulted in the deaths of up to one million people (estimates vary) and destroyed the lives of many more. As Missouri was a slave state at the time, it was quickly caught up in the conflict which impacted the Shirley family. Belle had five brothers and a sister, and despite her classical education, she couldn’t fight her ‘tomboy’ instinct.

She was known for her fierce temper and would routinely get into fights with boys and girls. Her brother Bud taught her how to fire a gun, and she soon became a crack shot with a rifle or pistol. A Union attack on Carthage ruined the Shirley’s business and forced them to move to Sycene, Texas. This is where Belle apparently became acquaintances with Jesse James and the Younger Gang in what became a pattern of associating with men of questionable character.

Angered by how the family’s way of life was being destroyed by the Union army, Bud, and Belle’s sweetheart, Jim Reed, became bushwhackers and were involved in guerrilla attacks on the enemy along the Missouri-Kansas border. Belle volunteered to spy on Union troops, and she would provide Bud with her findings. In 1864, tragedy struck when Bud was surrounded by federal militia at Sarcoxie and shot dead. His death probably hastened Belle’s journey into a life of crime.

In 1866, the Reed family also moved to Sycene and Belle married Jim. Belle had her first child, Rosie Lee (nicknamed Pearl), in 1868 and her second child, James Edwin, in 1871. Motherhood didn’t prevent her from getting involved in Jim’s life of crime. He was wanted for murder in Arkansas, so the family moved to California which is where they had their second child. The family moved back to Texas soon after and Jim became involved with a variety of criminals. Jim initially tried to make his way legally through farming, but he soon started working with the notorious Cherokee Indian family, the Starr clan, along with Jesse James and the Younger’s. This association was to cause even more tragedy for the Reeds.

The Death of Jim Reed

Perhaps it is no surprise that Belle became a hardened criminal since she was surrounded by outlaws for her entire adult life. Jim Reed was a notorious gambler, and it seems likely that he murdered the man who accidentally killed Reed’s brother. That’s the reason why he had to move to California, but the family had to flee once again when Jim was arrested for attempting to use counterfeit cash. When in custody, the police learned about Jim’s outstanding warrant but he skipped bail and settled back in Texas with the help of Cole Younger.

Jim and Belle moved to Indian Territory in Texas in 1873 and here, Jim was involved in the torture of a farmer and his wife. Along with two other thieves, Jim relieved the unfortunate farmer of $30,000 in gold coins. It is suggested that Belle accompanied Jim on many of his criminal pursuits dressed as a man and in 1874, she was wanted in connection with a stagecoach robbery. However, all was not well with the marriage, and Belle left Jim when she discovered his affair with Rosa McCommas. Jim continued his criminal career until he was shot dead by a lawman named John Morris in 1874.

The Legend of Belle Starr Grows

Belle lived in Dallas for most of the 1870s and was accused of stealing a horse in 1878. The law eventually told her to leave the state after a number of complaints were filed against her in Collin County. In 1880, she married Sam Starr, a member of the infamous Starr clan, in a tribal ceremony. They lived in a one thousand acre plot of land in Fort Smith, Arkansas which soon became a hideout for outlaws such as Jesse James.

She was now known as Belle Starr, and it becomes difficult to distinguish between her legend and her actual deeds. For example, it was claimed that she was Jim Reed’s partner in crime. While she almost certainly accompanied him in a few thefts of horses, money, and cattle in the Dallas area, she probably stayed at home and looked after her children most of the time. Likewise, there was a suggestion that she bedded a number of outlaws and even married Charles Younger in 1878, but there is no evidence that she shared a bed with different men.

However, it is clear that she was part of the Starr gang and participated in various crimes. She was arrested and convicted on a charge of stealing horses in 1883 along with Sam. Unfortunately for them, their case was heard by the legendary ‘hanging judge’ Isaac Parker who had sentenced 88 people to death. Perhaps it was Belle’s charm that saved them from the gallows because Parker was uncharacteristically lenient and sentenced the couple to nine months in prison apiece. They got into trouble soon after their release which led to a downward spiral that ultimately cost Belle her life.

Happiness is a Warm Gun

By all accounts, her relationship with Sam was the happiest time in Belle’s life, but it would end in tragedy. After escaping conviction on another charge of horse theft, Belle was aghast to learn that Sam had almost been killed in an altercation with his enemy, Officer Frank West. Sam’s horse was killed, and another bullet narrowly grazed Sam’s head. On December 17, 1886, Sam found out that West was outside a neighbor’s house where he and Belle were dancing. He went outside to confront West, and in the ensuing shootout, both men died.

Belle was devastated and apparently began a brief relationship with an outlaw named Jack Spaniard until he went on the run after murdering a U.S. Marshal. One of Tom Starr’s adopted sons, Bill July, married Belle moved in with her. She decided that outlaws were no longer welcome at her farm. If she thought this would be the end of her troubles, she was proven tragically wrong.

The Death of Belle Starr

She rented acreage to farmers but discovered that one of them, Edgar A. Watson, was wanted for murder in Florida. Belle threatened to reveal his whereabouts to the Florida authorities if he refused to leave. As a result, when Belle’s body was discovered at her farm on February 3, 1889, Watson was the prime suspect. It was a grisly death because she was thrown from her horse by a shotgun blast to the back. Her killer then finished her off, and Belle’s body had shotgun wounds to the neck, back, shoulder, and face.

Watson was tried for the murder but was acquitted due to lack of evidence. He came to a bad end himself as he was shot dead in 1910. Other suspects include both of Belle’s children and her husband Bill July. We will probably never know the truth, especially since Bill was shot dead by a deputy just a few weeks later. Indeed, Belle’s family didn’t have much luck. Her daughter became a prostitute although she eventually opened a string of bordellos and married a German musician. Belle’s son was arrested for horse theft in 1889 before becoming a Deputy in Fort Smith. He was shot dead in an Oklahoma saloon in 1896.

Belle was a relatively obscure figure outside of Texas for most of her life, but her legend gained attention due to the writings of Richard K. Fox who is best known for writing the National Police Gazette and dime novels. He published a novel entitled: Belle Starr, the Bandit Queen, or the Female Jesse James in 1889. The novel is still cited as a historical reference by some despite the fact it is laden with fiction.

The myths, and the 1941 film with Gene Tierney paint Belle as a rough, tough criminal who still displayed a genteel feminine side. She carried two guns and had no problem threatening people with them, yet there is no evidence that she ever shot anyone. In reality, Belle Starr was tough, a necessity to survive in the Old West, but she wasn’t the female Jesse James.