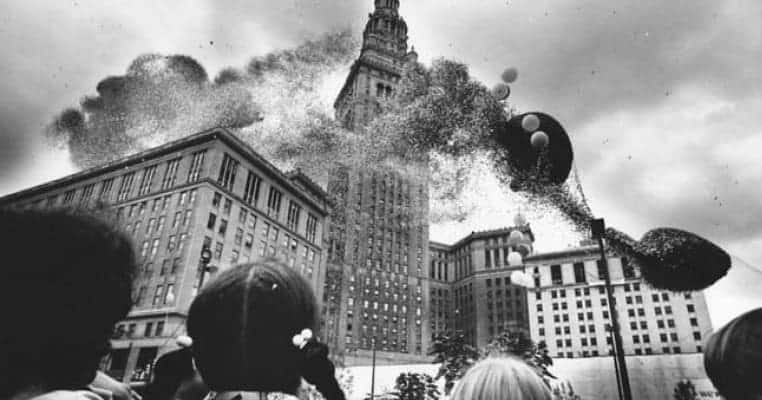 Plastic and other forms of contamination are helping to fuel the environmental catastrophe that humans are forcing upon the planet. While pollution is nothing new, only recently have people begun to wake up to its harmful effects. In the 1980s, the charity, United Way, attempted to set a world record and raise money by launching 1.5 million balloons. The result was a harbinger of today’s environmental crisis, as deflated balloons rained down and wreaked havoc on the city of Cleveland and nearby areas. The event was largely forgotten.

When a photo from the event surfaced on a Cleveland Remembers website, a hunt began for what the details of the picture. A user responded by saying, “It was 1986. The United Way of Cleveland wanted to break the world record for a balloon release. I think they released 1.5 million balloons. Except the weather didn’t cooperate, and it started raining right before they let them go. The winds pushed the balloons north, and the rain pushed them down into the water. I vaguely remember it, but recently found a bunch of slides a relative of mine took from the event.” The balloons resulted in several deaths and a sea of pollution on Cleveland and the surrounding area.

Volunteers filled the balloons up with air, then placed them in a white bin for storage. All of the different colors of the balloons made the container look like a multi-colored dome. Just before 2 pm on September 27, 1986, United Way released 1.5 million balloons in a public spectacle. The balloons mushroomed up around Terminal Tower on their way up to the heavens. What the engineers of the event had not anticipated is what would happen when the balloons proved the law of gravity right and, after going up, would come back down.

United Way Worldwide is an international non-profit organization that seeks to improve life for people by addressing community issues, particularly in healthcare, education, and jobs and income. Many of the programs that United Way initiates are intended to benefit children and youth. Though based in Alexandria, Virginia, United Way operates through local chapters in different cities across the country and in some international locations. Employees and volunteers target specific issues in their own communities and help address them by advocating for public policy and partnering with other organizations, such as schools and local businesses.

Balloonfest was a fundraising effort to help finance programs by United Way of Cleveland, Ohio. Over 2500 people had volunteered to help make the event a success. In addition to helping raise money for community service projects, the purpose of the launch was to set a world record for the most balloons released at a time and help put Cleveland on the map, thereby contributing to lift it out of urban decay. Indeed, the event did put Cleveland on the map, though it was soon forgotten. It also landed the United Way of Cleveland in the 1988 Guinness Book of World Records.

The Balloons Come Down

One thing that the organizers of the event did not expect was that a cold front was arriving, announcing the end of summer and the beginning of fall. Ordinarily, helium balloons stay afloat long enough for all the air to leak out of them before they begin to fall back to earth. However, at this particular event, they floated up and hit the cold air mass that was descending on Cleveland. The organizers could also be forgiven for not understanding the environmental consequences of releasing 1.5 million balloons into the atmosphere, considering that many people in 1986 were not aware of the dangers of pollution.

The balloons rose up in a giant mass, enthralling children and adults alike, and became little specks among the clouds. When they hit the cold air and the rain that the front was bringing, they quickly began their descent back to earth, with much of the helium still inside of them. They rained down on the nearby Burke Lakefront Airport, next to the shores of Lake Erie on the Cleveland side. The airport had to shut down for an hour because the inflated balloons that littered the runway were a hazard to departing and arriving planes.

They also rained down on Lake Erie itself, which is a thriving ecosystem for many forms of wildlife and plant life. The inflated balloons covered the surface of the water in what may have looked like a festive scene but were actually disastrous for search and rescue efforts. Raymond Broderick and Bernard Sulzer were fishermen who had gone out on Lake Erie the day before and not come back home. The day of Balloonfest, their families reported them missing, and the Coast Guard began a search and rescue operation. The balloons were so dense that the service had to be called off. The two men’s bodies later washed up on shore.

Lake Erie forms a border between the United States and Canada. Over the next few weeks, winds on the water blew the now-deflated balloons northwards to the Ontario, Canada shores of the lake. Residents were less than thrilled to have to pick up the balloon debris that was littering the natural shoreline. The balloons were made of plastic, which is not biodegradable, so the only way to deal with the plight was to pick them up and dispose of them. Many local Canadians expressed great dismay at the harm to the environment that the spectacle had caused.

A local, P. Allen Woodliffe, said, “A short time ago I was walking along the east beach of one of the special natural areas in Ontario-Rondeau Provincial Park. I was greatly dismayed, however, when I saw balloons along the shore, not just one or two but many. In an average 200-yard stretch along the east beach, I counted 140 balloons. In the same average distance along the south beach, there were at least 300. This translated into anywhere from 10,000 to 15,000 balloons scattered along the 8-1/2 miles of shoreline at Rondeau.”

The families of the two fishermen filed a lawsuit against United Way of Cleveland for how the event had resulted in the suspension of search and rescue efforts by the Coast Guard. The belief is that their boat capsized in the harsh weather that was descending on Cleveland. They escaped the vessel and attempted to swim to a nearby breakwall while the boat realigned itself. Perhaps they could have been saved if the balloons had not hampered the rescue efforts. The cost of the lawsuit caused the fundraising event to be a net loss financially and a public relations disaster for United Way.

The performance itself cost about half a million dollars to organize. That money was mostly from donations made by individuals who were concerned about their local community and wanted to help the United Way make necessary improvements. A lot of criticism was directed at the fact that so much money was spent on a fundraising spectacle rather than putting it to use in the way that it was originally intended. Had the money been spent more wisely, it could have been used to build a new school instead of causing so much environmental harm and possibly causing the deaths of two fishermen.

News of the disaster quickly spread throughout the United States. Some criticisms were directed at the lack of concern for the environment. Helium is a rare gas that, once lost, cannot be recovered. Using it to fill 1.5 million balloons in a publicity stunt seemed, to many people, a frivolous waste when it could have been used for scientific research. Others complained about the harm to local animals and wildlife. One local woman, Louise Nowakowski, filed a lawsuit for how the balloons had distressed her horses. She settled out of court. Lawsuits from the event cost the United Way millions of dollars, money that could have been used for community improvement.

Lessons can undoubtedly be learned from the disaster and infamy of Balloonfest. One, of course, is the necessity of nonprofits, like United Way, ensuring that money donated to them is spent well and not on frivolous activities that are nothing more than publicity stunts. The event did more than pull money away from the local causes that United Way supports. It caused significant harm to the community and damaged the reputation of the organization. The financial loss, due to the lawsuits and clean-up efforts, in addition to the $500,000 spent organizing the event, far outweighs any benefit.

Additionally, there is a lesson regarding the environment. Things that harm the environment may be fun for a minute or even a day, but the long-term consequences will far outweigh any benefits that may have been gained. In this case, the harm to the local wildlife and plant life, particularly around Lake Erie, cannot be estimated. There is no telling how many fish and birds inadvertently ate the brightly colored balloons, mistaking them for a meal. The plastic from the balloons cannot be recycled and is not biodegradable. It will remain on earth forever.