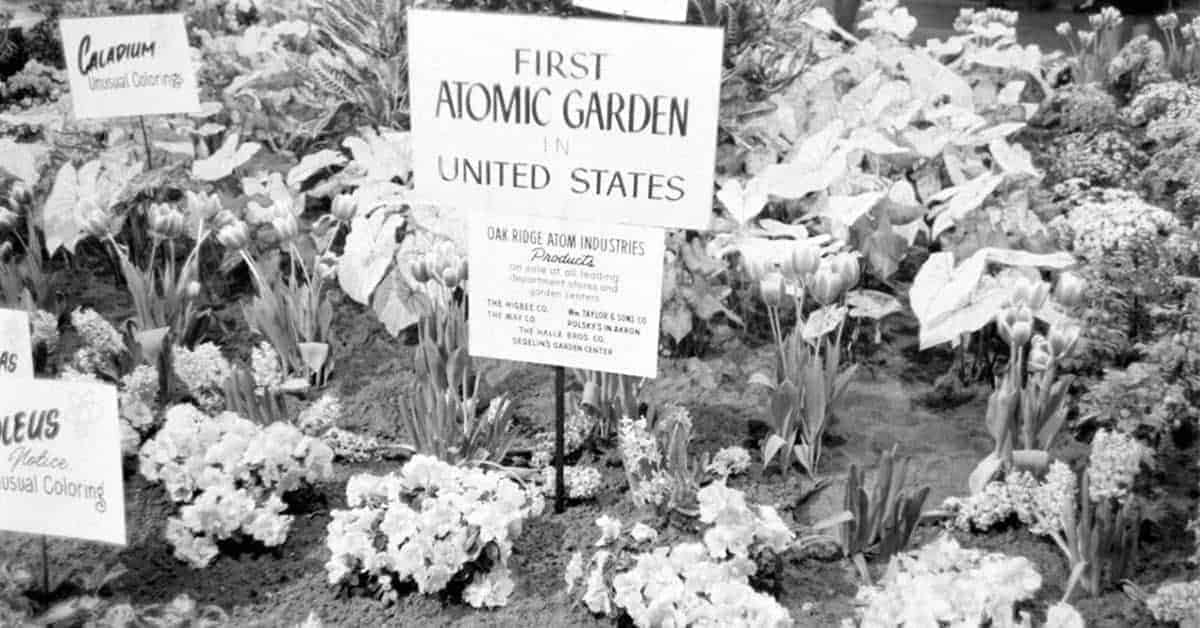 From the devastating impact of nuclear warfare to the generation of cheap, reliable electricity and lifesaving medical technology, most are aware of the profound ways in which the nuclear age fundamentally changed our world. But what about the food we eat? Has our food supply been effected by the nuclear age as well? A little-known trend in food cultivation, which began during the 1950s and 1960s used nuclear technology in an attempt to produce new varieties of plant life.

While the idea is far less popular today, some of the resulting varieties of vegetation from these experiments are still with us today. In fact, many common foods such as grapefruit and peppermint are examples of food modified by atomic bombardment. You may think experiments with food had to be conducted by sophisticated laboratories executed under strict scientific controls. While this was sometimes the case, shockingly, an entire movement of amateur gardeners started planting irradiated seeds in their backyard, enthusiastically watching their gardens to see what would develop.

Today, most people would fear exposure to nuclear radiation as its dangers are well known. But these things can be explained if we understand how little was truly understood about the effects of nuclear technology during those early years. While the world witnessed directly and in graphic detail, the devastation of the atomic bomb, many influential people wanted to find peaceful uses for this new and obviously terrifying technology. Some strongly believed that finding peaceful uses would help shift attention away from nuclear war to peaceful ways of harnessing the immense potential of the atom.

Even President Eisenhower was interested in resolving “the fearful atomic dilemma” as he gave his “Atoms for Peace” speech in 1953. In it, he hoped “the miraculous inventiveness of man” could be used to preserve civilization, not destroy it. Indeed, his words prompted some to take action in order to find alternate ways to use this new technology.

Many peaceful atomic initiatives developed after this speech was given. Some of it was even done by private individuals. It was during this political and social climate that “atomic gardening” became a popular fad. It all started in 1957 when a dentist from Tennessee named C.J. Speas received permission to obtain a source of Cobalt-60 from the Atomic Energy Commission in order to expose seeds to radiation.

Astoundingly, it was possible for an ordinary citizen like Speas to obtain radioactive material from the government in the 1950’s. Soon, he began exposing a wide variety of seeds to radiation within a cinderblock, purpose-built bunker in his own backyard. By 1960, he founded “Oakridge Atomic Industries, Inc.” and began selling his seeds commercially. Speas eventually sold millions of seeds to a variety of people and became the only source of this type of product in the United States.

Unfortunately, detailed records were not kept so it is not possible to know exactly who bought the majority of the seeds, what varieties were most popular with purchasers or in which parts of the country the seeds were most commonly planted. No one even knows where the sample of Cobalt-60 is today, and the bunker where his seeds were irradiated no longer exists.

But we do know that one of Speas’ biggest customers was a rather eccentric woman from Britain named Muriel Howorth. She was a life-long activist espousing the benefits of nuclear technology since the early 1950’s. So dedicated was she to the cause of nuclear energy, Howorth even produced an exceptionally odd play in which actors dramatized protons, neutrons, rats cows and even personified knowledge itself.

Not all of her work was so outlandish, however. Some of Howorth ambitions were more level-headed, if not exactly successful. She founded the UK Atomic Gardening Society in 1959, which used an early example of crowd-sourcing in order to popularize the use of irradiated seeds. Inspired by a scientist from North Carolina State University who gave her X-ray mutated peanuts which were far bigger and more robust than an ordinary example, Howorth enthusiastically presented them at a dinner party in which there were many scientists.

While her dinner guests were amused, none of them were as excited as Howorth wanted them to be. Frustrated and wondering what to do with all the left over peanuts, she decided to plant some of the leftovers. The resulting plant quickly germinated and grew into an unusually large peanut plant. This early success inspired Howorth to purchase millions of irradiated seeds imported from Speas’ backyard operation and the founding of her society.

Muriel’s intended her gardening society to act as an enormous experiment in which participants would plant the seeds and record the results in workbooks. The data would then be shared within the society. Initial excitement over these seeds led to a still unknown number of people attempting to grow new and wondrous plants in their gardens. However, enthusiasm for atomic gardening began to wane only a few years later, as the effects of nuclear radiation became better understood and the public was more aware of possible dangers. Other problems with this method included a lack of rigorous scientific controls, making results hard to track and difficult to recognize.

But the question still remains: was the idea of atomic garden experimentation a foolish dream or was it ahead of its time? On the surface it seems utterly crazy to plant mutant seeds into a suburban garden expecting it to yield scientifically beneficial results, but this concept may not be as insane as it sounds. Even though small citizen gardens scattered all over the country did not seem to yield anything interesting, many official laboratories in the United States, Europe and the former Soviet Union conducted serious experiments that are still with us today.

For instance, most of the peppermint oil sold today comes from a variety of mint that was created with thermal neutron irradiation in 1971. In Texas, a type of grapefruit known as “Rio Star” accounts for roughly 75% of total grapefruit production. It was produced by a similar process and is desired because of its vibrantly-red flesh.

Similarly, about half of the rice grown in California is of a type called Calrose 76, also a product of radio-active experimentation. In fact, over 2,000 mutant crops are officially registered all over the world which were produced by intentional irradiation. Event today, the IAEA (International Atomic Energy Agency) the UN’s “Food and Agriculture Organization” and Japan’s “Institute of Radiation Breeding” all still experiment with atomic gardening.

Most of the documentation and virtually all of the positive results still relevant today were completed by labs, and it is basically impossible to know how informal atomic garden experiments affected the food supply today, or if any descendants still exist.

Who knows? Maybe that misshapen heirloom tomato or oddly-colored marigold growing in your garden could simply be a natural variation, passed down from generation to generation. On the other hand, perhaps they could also be the byproduct of a short-lived but real atomic gardening experiment.