Athens vs. Sparta: How the Second Peloponnesian War Was Won 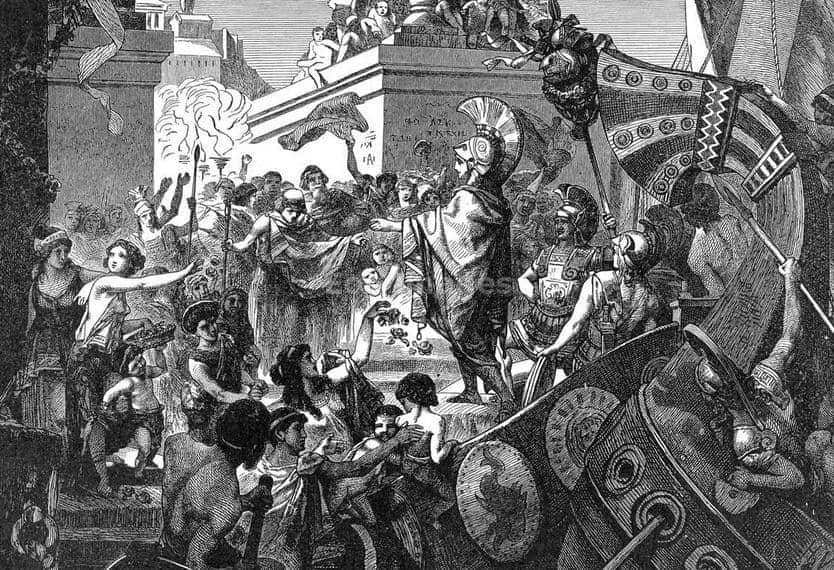 Athens vs. Sparta: How the Second Peloponnesian War Was Won

The Second Peloponnesian War was fought between the city-states of Sparta and Athens in the 5th century BC. The conflict began in 431 BC and ended with utter defeat for Athens in 404 BC as its naval empire was destroyed. The First Peloponnesian War took place from 460-446 BC and was mainly comprised of skirmishes between Athens and Corinth; Sparta occasionally entered the fray against the Athenians.

Sparta and Athens were culturally very different places which led to disharmony and mistrust between them long before the Peloponnesian Wars. They joined with other Greek states to repel the Persian invasion but Sparta ultimately withdrew from this alliance and went back to its usual isolationist stance. After the Persian wars, the Greek states combined in a series of protective agreements. Athens founded the Delian League in 478-77 BC, but it soon became little more than an Athenian Empire. It angered the other city-states by moving the Delian League’s treasury to Athens in 454 BC.

The Peloponnesian League was formed in 505 BC, and members agreed to have the same allies and enemies as Sparta. The First Peloponnesian War concluded with the defeat of Athens at Koroneia in 446 BC. A treaty known as the Thirty Years Peace was signed between Sparta and Athens, but it lasted just 15 years. Despite losing in the first conflict, Athens was building its empire; a fact that worried Sparta. In 433 BC, Athens sided with Corcyra against Corinth and the following year; it laid siege to the city of Poteidaia. Athens then placed a trade embargo on Sparta’s ally Megara and finally, another Spartan ally, Thebes, attacked an Athenian ally, Plataea. Sparta invaded Attica in 431 BC and the Second Peloponnesian War was underway.

The war can be divided into separate sections; the first spell of war lasted for a decade and was followed by six years of peace before hostilities came to a climax. The first couple of years went poorly for Athens as Sparta began the campaign by causing as much destruction to Athenian land as possible. A terrible plague hit Athens in 430 BC; it was so bad that Sparta decided against attacking its enemy in case its soldiers contracted the deadly illness. Things got worse for Athens when Pericles, one of its most influential leaders, died from the plague.

However, Athens recovered well and under the leadership of Nikias and Kleon, it enjoyed success in the Corinthian Gulf in 429 BC. The Peloponnesians began their Siege of Plataia in the same year. The city was an Athenian ally and the siege probably ended any lingering hope of peace between Athens and Sparta. The Thebans began the assault and succeeded in taking the city after two years.

The Spartans probably thought an early victory was possible, but these hopes were completely dashed as the tide of the war turned against them. Athens enjoyed a couple of significant wins in consecutive years. At the Battle of Olpae in 426 BC, over 1,000 Spartans died. Things looked bleak for Sparta in 425 BC after losing the Battle of Pylos and the Battle of Sphacteria in quick succession.

It was a crucial period of the war; Athens had the initiative, and there was the possibility of Sparta suing for peace. Spartans were always trained to die in battle rather than surrender, but at Sphacteria, 120 Spartans were captured. Athens looked to push home its advantage, and in 424 BC, it launched an expedition against Boeotia and Megara. However, this mission was a complete failure as it suffered a major defeat at the Battle of Delium. Athens lost over 1,000 men in a battle that cost it considerable momentum even though it did take Kythera, a Spartan island.

A one-year truce was called in 423 BC, but as soon as it expired, Kleon led an Athenian army to Thrace. His attempt to capture Amphipolis was a disaster as he died in the battle. The Spartan hero of Delium, Brasidas, was also killed in the fight. With two warlike leaders now dead, it became easier to create a peace treaty. In 421 BC, the Peace of Nicias was agreed. The deal agreed to restore the situation as it stood at the beginning of the war; Sparta was allowed keep Plataea and Athens held Nicaea.

The Peace of Nicias was probably doomed from the start as it wasn’t popular with Sparta’s allies. The Boeotians and Corinth were against it; especially the part which allowed Sparta and Athens to make changes without consulting their allies. The warring states created an unexpected alliance; each agreed to come to one another’s aid if they were attacked. Sparta initiated this agreement due to the fear of the state of Argos forming a powerful alliance once its peace treaty with Sparta expired.

Although the war itself did not restart for another six years, the ‘peaceful’ period consisted of various skirmishes involving the other city states. In 420 BC, Boeotia formed a new alliance with Sparta whereas Athens allied itself with Argos, Mantinea, and Elis. The two alliances came close to battle on several occasions, but there was no major battle for a couple of years.

The Athenian alliance encountered an enormous Spartan army under King Agis II at the Battle of Mantinea in 418 BC. The Athenian-allied army lost well over 1,000 men while Spartan losses were below 300 according to historian Thucydides. It was a crushing defeat that helped remind the rest of the Greek world that the Spartans were still the best warriors in the region. Even though the enemies had clashed at the Battle of Mantinea, the Peace of Nicias had technically not been breached, so the tense peace continued for a few more years.

Both states were guilty of some terrible crimes in this period. In 417/16 BC, the Spartans executed all the citizens of Hysiai while the Athenians murdered the citizens of Melos. The following three years was a period of stalemate as both states carried out minor actions that didn’t breach the peace treaty. The defeat at Mantinea did nothing to dent Athenian confidence, so it answered a call for help from some of the Greek cities of Sicily. Athens had allies on the island such as the Segestans, and they tried to get Athenian help by suggesting that the Syracusans would take control of Sicily thus helping Sparta.

Athens launched its aggressive campaign with an invasion of Sicily in 415 BC. The expedition began with Nicias, Lamachus, and Alcibiades as the chief commanders; however, the latter was recalled to Athens to face charges of impiety. He avoided the trial by fleeing to Sparta. Athens sent 200 ships on the expedition along with an estimated 650 cavalrymen. It was a reasonable force, but Syracuse had over 1,200 cavalrymen.

Aside from the setback of losing Alcibiades, the expedition began reasonably well. A victory at Catane was followed by what should have been a significant victory at the Battle of Syracuse in 415 BC. Instead of pressing their advantage, the Athenians abandoned their camp and returned to Catane. Perhaps the Athenians were concerned about potential harassment by the Syracusan cavalry; this could be the reason why its infantry failed to pursue its defeated enemy. Whatever the reason, it was a crucial error and one that perhaps turned the tide of the war; it certainly impacted the Sicilian invasion as the Syracusans were able to recover and persuade Sparta to declare war on Athens once again.

During the winter of 415-14, the Syracusans raided Athenian camps at Catane and forced their enemies to move to Naxos. The Corinthians sent aid to Syracuse and Sparta also agreed to send a small force. Unperturbed, Athens began its Siege of Syracuse in early 414 BC, and after a promising start, Lamachus was killed during the fighting. Nicias was left in sole charge, and he was apparently a poor commander (although he may have been ill) as the Spartan force under the leadership of Gylippus managed to sneak past the Athenians and join up with Syracuse.

With their combined power, they built a wall to prevent the Athenian attempt to blockade the city. In 413 BC, Athens won a naval and land battle but a second naval battle resulted in a shock defeat. An Athenian general called Demosthenes arrived on the scene with reinforcements but his ambitious attempt to attack the city ended in failure with heavy losses. Instead of retreating immediately, the Athenians followed superstition and insisted on waiting 27 days before leaving. This delay allowed the Syracusans to block their attempts to move by sea and land. The Athenian retreat was a complete disaster as its army was surrounded and forced to surrender. Nicias and Demosthenes were executed, and the survivors treated as slaves.

For many city states of the age, the failure in Sicily would have ended their war. However, Athens managed to regroup and ultimately gain parity with Sparta regarding naval power. Members of the Athenian empire were encouraged to revolt after Sicily and Sparta had the problem of having too many potential allies; each with their demands. Despite having the upper hand, Sparta suffered a couple of defeats in 412 BC as it attempted a naval expedition to Chios followed by Lesbos.

At this point, there were apparently revolts all over Greece with states such as Chios, Teos, and Miletus launching uprisings. Sparta forged an alliance with Persia, and by the winter of 412/11, it was apparent that Athens had lost naval superiority. This was demonstrated when Athens lost a minor naval battle at Cnidus; a second fleet arrived but neglected to engage for fear of another loss.

Athens was in political turmoil by 411 BC. Democracy was replaced by an oligarchy which was ultimately replaced by the regime of the Five Thousand. Despite this, Athens was in the midst of a remarkable turnaround in the war. Victories in naval battles at Cynossema in 411 BC and Cyzicus in 410 BC appeared to put Athens in control; the latter victory resulted in the return to democracy in Athens as the Five Thousand’s rule ended.

After yet another victory at the Battle of Megara (a land battle) in 409 BC, Athens once again went on the offensive. It captured various territories in 408 BC as it looked to defeat its bitter rival. In 407 BC, Sparta made a fateful decision; it appointed Lysander as the admiral of its fleet in the Aegean. He turned out to be an excellent commander and boosted the quality of the Peloponnesian fleet to the point where it won Sparta the war. Another critical event occurred that year; Cyrus the Younger, a prominent Persian prince, was made satrap of several regions and made it clear that he wished to support Sparta.

Lysander was replaced by Callicratidas, but when the latter was killed in the Battle of the Arginusae Islands in 406 BC, Lysander assumed command once again. The decisive battle of the Second Peloponnesian War occurred at Aegospotami in 405 BC where Lysander annihilated his poorly organized opponents. All but 10 of the 180 Athenian ships were captured on the nearby beach, and 3,000 men were executed. The Delian League had no fleet and was forced to disband while Athens came under siege. It accepted harsh peace terms; for example, Athens was not allowed a fleet of more than 12 ships.

Defeat in the Second Peloponnesian War meant that Athens would never again threaten to dominate Greece. Sparta became the dominant power, but its success was short-lived as its territorial ambitions led to the start of the Corinthian Wars in 396 BC. Defeat to Thebes in 371 BC at the Battle of Leuctra kept Sparta in check. The real winner of this lengthy conflict was probably Macedonia. The weakened Greek city-states were no match for Philip II when he launched his invasion in the 350s BC.