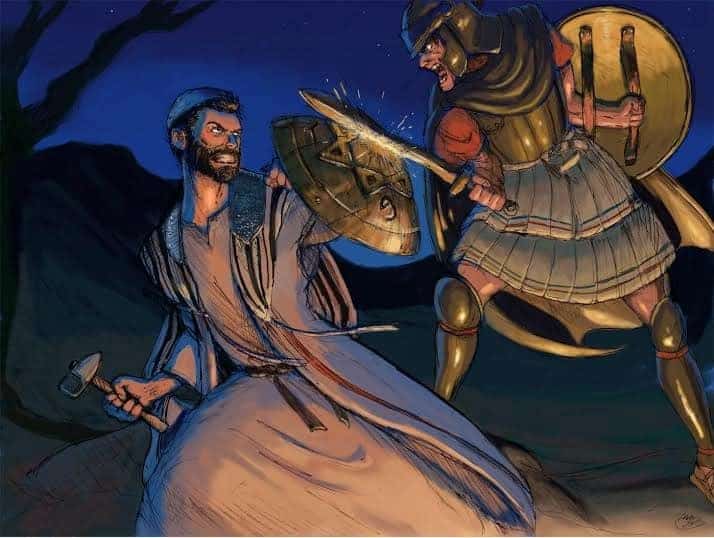 The Seleucids Get Serious

Initially, Antiochus dismissed the revolt as a minor irritation but the humbling defeats at Ma’aleh Levona and Beth Horon forced him into a rethink. The irate monarch decided to destroy the threat once and for all by sending an enormous force and three of his best generals, Nicanor, Gorgias, and Ptolemy, to Israel. This large force marched down the coast to avoid further ambushes and set up base camp at Emmaus which is around 15 miles southwest of Jerusalem.

Gorgias was apparently the senior commander and he decided to launch a surprise attack on the Jewish camp. The Seleucids were so certain of victory that when they arrived, Nicanor spread the word around cities and seaports that he would be selling Jewish slaves for 90 talents apiece. Gorgias made his move with 5,000 infantry and 1,000 cavalry with the aim of preventing a Jewish retreat into the mountains. However, Judah’s spies told their commander of the imminent assault so he led his army away with a view to launching a surprise attack of his own.

In the meantime, Gorgias was searching for the Jewish army but all he found were burning fires at the camp and no soldiers. He decided that the Jews must be in the mountains but had no success in finding them there either. What he didn’t realize was that Judah had left behind a group of men who harassed the Seleucids and kept them away from the main Jewish force. Upon arriving at Nicanor’s camp, the poorly equipped Jewish army came across a well-armed enemy that probably outnumbered him 2:1. Rather than panic, Judah turned the tables on the Greeks and inflicted a humiliating defeat.

Unorthodoxy Wins at the Battle of Emmaus

Judah set up a fortified camp near the enemy at Emmaus and divided his men into three columns, each one was ordered to attack a different part of the Greek Phalanx. He also divided the men into groups of 1,000, 100, 50, and 10 so that they resembled a normal army. Before launching the attack, Judah addressed his troops and said it was better to “die in battle than to see the evils of our nation, and of the holies.” Despite these words, the commander was only interested in victory rather than seeking martyrdom.

Nicanor was completely unprepared for an attack and was utterly confused by the unusual tactics adopted by the enemy. Although there were at least 5,000 Seleucids against perhaps 3,000 rebels, Judah’s men quickly routed the enemy. Things got even worse for them when another small force attacked from the rear. Confusion reigned and an estimated 3,000 Greeks died at Emmaus while the rest dispersed and were picked off as they retreated.

The Return of Gorgias

A frustrated Gorgias returned to his base camp only to be met with fire, fury and destruction. He had arrived too late to save his army and elected to avoid direct conflict with Judah. Instead, he wisely fled to the coastal plains with Judah in hot pursuit. At this stage, it seemed as if the Greeks would be driven out of Israel after what was Judah Maccabee’s finest victory. According to former Israeli President, Chaim Herzog, the Jews “were a fighting people again, after a pause of nearly four centuries.”

The Battle of Emmaus marked the end of the first Maccabee campaign. It had been a remarkably successful couple of years as Judah significantly increased the size of his army and had fresh ammunition and weapons. The next step was to deal with the army of Timotheus which he did easily. The Battle of Beth Zur in 164 BC was the next significant battlefield event of the Maccabean Revolt and pitted Judah and his 10,000-man force against the 20,000 men of Lysias. Once again, the rebels adopted ‘hit and run’ guerrilla tactics to great effect and won the battle decisively. At least 5,000 Seleucids died and Judah captured Jerusalem soon after. However, this proved to be the high-water mark of the Maccabean campaign.

The Defeat of Judah

Although the Maccabean army was enjoying a lot of success and restored the temple in Jerusalem, the Seleucids continued to control the Arca, a strong fortress within the city. It faced the Temple Mount and was a constant reminder that Jerusalem still didn’t fully belong to the Jews. Judah laid siege to the fortress in 162 BC when Lysias was busy in Antioch in a dispute with Philip, the emperor’s regent. However, Philip died and Lysias returned to Jerusalem with an army of around 55,000 and 30 war elephants.

At the Battle of Beth-Zachariah, Judah made a terrible mistake. Instead of using his successful guerrilla tactics, he decided to adopt traditional military formation in the belief that the Seleucids would be caught by surprise. Instead, they were ready and inflicted a heavy defeat upon the Maccabean army. One of Judah’s best commanders, Eleazar Horan, was killed in battle.

Although Judah defeated the Seleucids at the Battle of Adasa in 161 BC, killing Nicanor in the process, he suffered defeat, and death, at Elasa in 160 BC. During the Battle of Elasa, Judah ignored the 2,000 cavalry of the enemy and launched an all-out assault on the enemy commander, Bacchides. He had around 1,000 men against 20,000 Greeks and the sheer weight of numbers contributed to his loss.

The death of Judah marked the end of the Maccabean Revolt and the Seleucids regained control of Jerusalem. However, the fighting continued as Judah’s brothers, Jonathan and Simeon, continued to attack the Seleucids and within a few years, the Greeks lost control of Judea. Although he was eventually killed in battle, Judah Maccabee has gone down as one of Israel’s greatest ever military commanders and his victory at the Battle of Emmaus in 166 BC was a masterpiece in Guerilla warfare. Incidentally, there is a suggestion that the Maccabee rebellion did not take place until 140 BC.

Where Do We Get This Stuff? Here is a List of Our Sources

‘General Judah: How the Bros Maccabee Won the War.’ Tuvia Brook in The Times of Israel. November 2013.