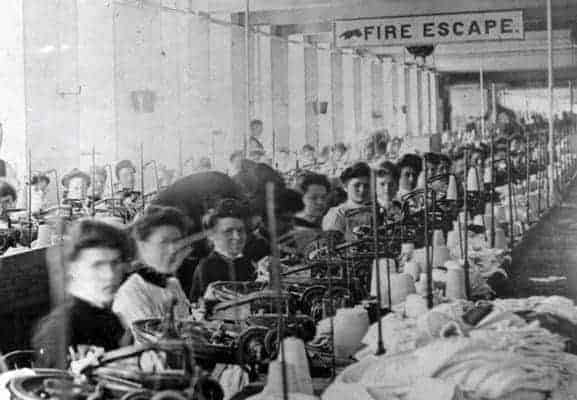 It was the deadliest industrial disaster in the history of New York City. On March 25, 1911, the Triangle Shirtwaist Factory situated in the Asch Building in Greenwich Village caught on fire. Offering nothing better than sweatshop conditions, the people who owned the factory assured themselves the biggest bang for their buck.

Not only did they expect people to work in poor conditions for long hours, it was company policy to lock the stairwell doors inside the building. This was to prevent workers from taking unsanctioned breaks. On the day a fire broke out and quickly spread through the building, smoke began suffocating people. Those who realized the stairs were not an option jumped from windows in a desperate attempt to escape the inferno.

It was late in the afternoon on a Saturday when the factory began to burn. A scrap bin under a messy table overgrown with various cuts of fabrics began seeping smoke soon after a cigarette butt had been carelessly tossed into it. Smoking was banned, but widely practiced in the factory. To avoid getting caught smoking, workers invented ways to sneak cigarettes and go undetected by funneling the smoke through lapels.

Not surprisingly, conditions for the fire were plentiful; next to the trash bin was a massive pile of unused material scrap left over from cutting fabric. That pile along with fabrics draped from the ceiling would feed and spread a fire in no time at all. Within five minutes of the trash bin catching fire, enough smoke was produced that the fire alarms sounded.

The factory was expansive; it took up three entire floors, the lowest of them was eight stories up. Being located so high made escaping the fire problematic. As the fire department arrived, workers not only found themselves facing a raging inferno; they had the additional task of navigating bodies falling from the windows. On top of that, they were not equipped for a fire about the sixth floors.

Their ladders were not able to reach the fire. A woman working on the eighth floor phoned the floors above to warn them about the fire. The ninth floor was not reachable, those working there learned as the fire began engulfing their work space. The ninth floor had a number of exits, a couple of freight elevators, a fire escape and stairways – as on the other floors, the stairwells were locked.