Antisemitism Helped Protect Jews From the Black Death... And Then Got Them Killed 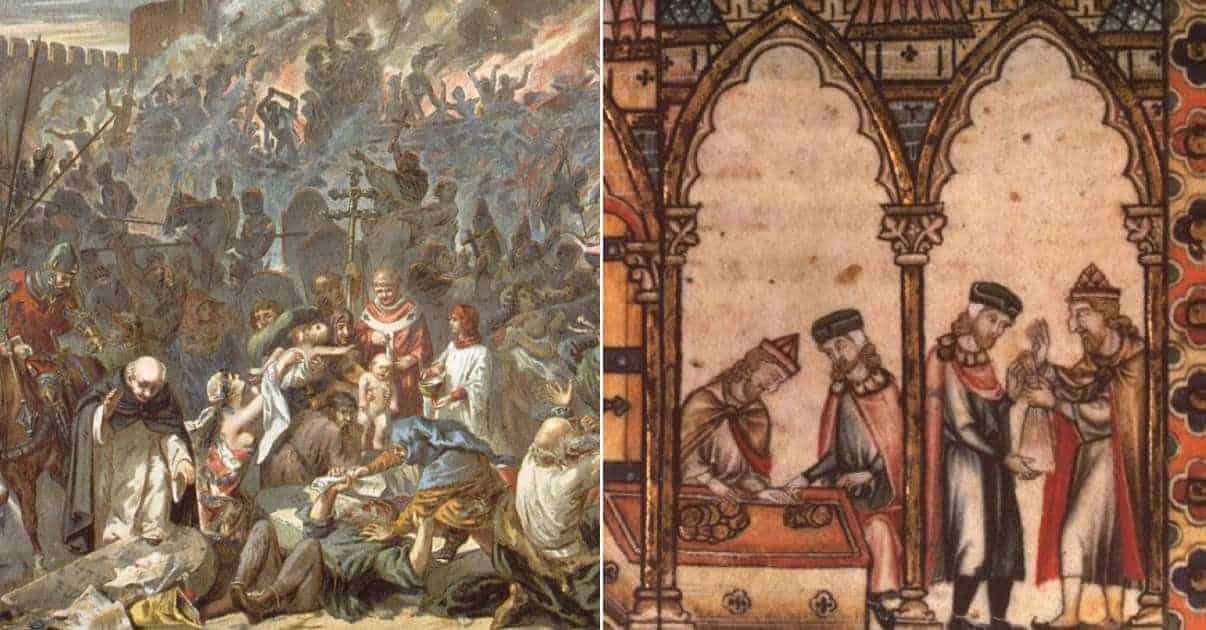 In the 14th century, the Black Death swept over Europe. All across the continent, people died in enormous numbers. Prosperous villages and cities became ghost towns as plague burned through the population, killing peasant and king alike. Priests refused to perform the last rites for fear of contracting the illness, and the deeply religious people of medieval Europe died without even the comfort of ritual. As much as half of Europe’s population may have perished by the end of the century. And many watching their civilization crumble under the onslaught of faceless death were convinced that the end of the world was at hand.

As often happens, their fear turned into rage as they searched for someone to blame for the disease. They soon turned to a familiar target: the Jews. Scattered across Europe and largely isolated from the rest of their communities, the Jews were an obvious scapegoat for imagined crimes throughout European history. The Jewish community endured centuries of pogroms and violence motivated by religious hatred and the simple fact that they were different from everyone else. And with the Black Death coursing through Europe, the Jews were subjected once again to mass murder and persecution.

The deep-seated anti-semitism of medieval Europe rested on a number of different factors. First, there was the religious justification that the Jews had played a role in the death of Jesus. And medieval Christians often applied this imagined blood guilt to the entire Jewish people. In their mind, the Jews were responsible for the death of God, and thus there were very good reasons to despise them. But this justification probably had less to do with the history of animosity towards the Jewish people than other, more earthly considerations. In fact, much of the hatred boiled down to money.

In medieval Europe, Jews were often barred from taking the same sorts of jobs as Christians. Thus, one of the few ways of making a living available to medieval Jews was moneylending. The Catholic Church officially forbade the lending of money with interest. But this prohibition didn’t extend to Jewish communities. So in many cases, anyone who wanted to borrow money in medieval Europe had to do so through them. As a result, many nobles and merchants were in debt to Jews. This fact meant that they had a monetary incentive to encourage attacks on Jewish communities.

But it wasn’t just people who owed them money that had a reason to dislike the Jews. Medieval Europe was divided into a strict social hierarchy. To the poor peasants who rested at the bottom of the social pyramid, the Jews were one of the few people they could look down on. Deeply religious, these peasants often imagined that the Jews were hatching some scheme to destroy Christian society. This distrust of the Jewish community made it easy to imagine that they caused the Plague. And if an excuse was needed to blame the Jews, there was an obvious one: they seemed to die less often than everyone else.

Though almost everyone in Europe was affected by the Black Death, the Jewish communities in many areas had lower death rates. There are a few possible explanations for this fact. First, the historical persecution of Jews meant that they were usually isolated in ghettoes. The lack of interaction with the rest of society meant that there was less opportunity for the Plague to enter the community. In addition, Jewish religious tradition requires strict standards for hygiene. This focus on cleanliness might have protected the Jews from the fleas that spread the Plague. But this protection from disease came at a cost.

The fact that Jewish communities suffered less from the Plague than others made the rest of society suspicious. Accusations soon spread that the Jews started the disease by poisoning wells. It wasn’t the first such accusation. Any sudden epidemic in medieval Europe could be accompanied by arguments that the Jews were to blame. In a time before people understood disease, the idea was easy to believe. But other accusations were also popular. One of the most enduring was the “blood libel,” or the idea that Jews murdered Christian children to use their blood for Passover rituals.

As the Black Death spread across Europe, so did people’s anger and distrust towards Jews. And as people died in staggering numbers, that fear and suspicion exploded into violence. One of the first recorded attacks against a Jewish community during the Black Death occurred in the French city of Toulon in 1348. That April, a mob descended on the Jewish ghetto following accusations of well poisoning. Jews were murdered in their homes and their houses stripped of valuables. But this attack was really just a grim warning of what was to come as cities across Europe descended into violence.

In the Holy Roman Empire, this violence quickly reached horrifying levels. In 1349, a mob attacked the Jewish quarter in the city of Erfurt. Groups of men stormed through the streets of the ghetto, seizing any Jews they could find and lynching them or simply beating them to death where they stood. In desperation, some Jewish families set fire to their own homes, preferring to die at their own hands than those of the mob. Fire and blood surged across the Jewish quarter as rioters looted the houses that still stood. Contemporary accounts state that by the end of the massacre over three thousand people were dead.

Meanwhile, in the city of Strasbourg, Jews accused of poisoning wells were arrested and tortured in an attempt to get them to confess. In spite of their denials, they were tied to cartwheels and had their limbs smashed with hammers. The leaders of the city were aware of the earlier pograms in France and wanted to prevent any more attacks on Jews in Strasbourg. Whether out of a sense of justice or because they relied on taxes from the Jewish community, guards were stationed outside the Jewish quarter to protect them from violence. But in the face of the mob, it wouldn’t be enough.

On February 14, 1349, the citizens of Strasbourg rebelled against merchants and nobles who controlled the city, in part because of anger over their protection of the Jews. The new leaders of the city dispatched two of the deposed nobles to the Jewish quarter, where they informed the Jews that they were there to lead them to safety. The men lead many of the city’s Jews to a place outside the walls where a large wooden building had already been erected. There they gave them a choice: consent to baptism or die. Those who agreed were spared, along with children and particularly beautiful women.

Those who refused were forced inside and the building was set alight with torches. With the city’s protection lifted, mobs poured into the Jewish quarter and began setting fires. As in earlier riots, houses were looted and any Jews found left on the streets were murdered or rounded up to be burned at the stake. According to contemporary chroniclers, the massacre lasted six days and claimed nine-hundred lives, effectively eliminating the entire population of Jews in the city. Their property was divided up among the rulers of the city and all debts owed to them canceled.

This pattern of city leaders trying to protect their Jewish citizens only to be over-ruled by the mob was actually very common throughout German-speaking areas. A similar event happened a few months before the Strasbourg massacre in the city of Basel. As in Strasbourg, the Jews were forced into a wooden barn and burned alive. The survivors were forcibly converted to Christianity. Unlike other nations in Europe, the Holy Roman Empire was divided into smaller city states and largely independent principalities. And often these cities were ruled by councils of merchants.

These councils often relied on Jewish money lending and taxes to sustain their wealth, so they typically had more incentive to protect their Jewish populations than the rulers of other areas. But as the social order broke down under the strain of the Black Death, they often found that they lacked the authority to do so against the mob. One man who did have the authority to ban all attacks on Jews was the Pope in Rome. And he did with a series of Papal Bulls that stated anyone blaming the Jews for the Plague had been “seduced by that liar, the Devil.”

But not even someone who was widely believed to be God’s representative on Earth could stop the violence. That’s likely because religion was less of an incentive for attacking Jews than greed was. The attacks provided an opportunity for those who owed money to Jewish lenders to wipe out debts and seize wealth. But ultimately, the best explanation might have been fear and simple bloodlust. Attacking Jews allowed people to vent their rage at those they blamed for the Plague. It wasn’t the first time the people of Europe targeted Jews in times of strife, and unfortunately, it wouldn’t be the last.