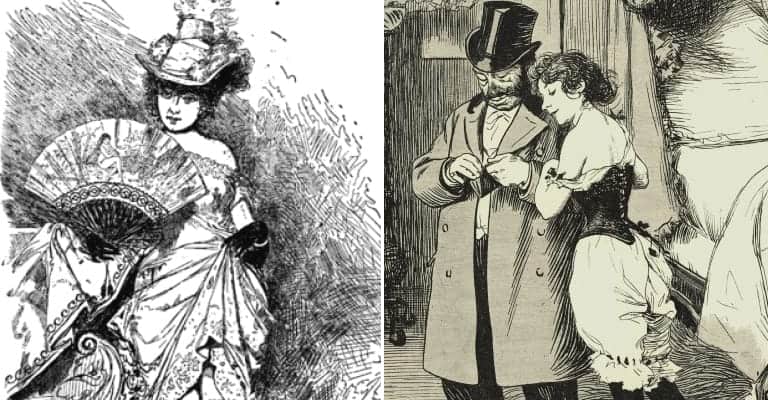 The origins of the term hooker, meaning a prostitute or sex worker, are not entirely clear. There are several promising theories, but not one historical source can be fully proved with clear evidence. The proposed etymologies range from 16th-century slang to a nickname for a New York City borough in the 1850s. Another promising theory focuses on a Union general in the US Civil War named Joseph Hooker. The French language provides clues for a more agricultural source, as a French term for a sex worker comes from the literal hooking of men, as in fishing. More modern references to hooking a husband or wife in English could potentially support that theory.

Debates about the origins of words and phrases are part of the field of etymology – the study of the origins and histories of words. The term etymology itself stems from the Greek words for “true sense,” etumon, and “study of,” logia. Etymology has been practiced since the 6th century BC with Sanskrit and Greek scholars. It is part of the field of linguistics and is still studied today, especially for languages where few historical, etymological records exist such as the Uralic group of languages in northern Eurasia. Etymologists are those who research etymology, and they have several methods they can use to try to determine the history of words including the comparative study of texts between languages, the study of variations in dialects, and the study of semantic change over time.

Joseph Hooker was a United States Army Officer who achieved the rank of Major General in the Union Army during the US Civil War. He earned the nickname “Fighting Joe” through a simple clerical error when a reporter used it to report on the Battle of Williamsburg. Hooker hated the name, but it stuck. His opposing general in the Confederate Army, Robert E. Lee even used the name to mock Hooker.

During the Civil War, Hooker’s army was stationed in Falmouth, Virginia. His unit was notorious for partying and hard-drinking, and a contemporary cavalry officer, Charles F. Adams Jr., described the station was a combination of a “bar-room and a brothel.” It is this reference to the station being like a bordello that fueled the popular legend that Hooker’s last name is responsible for the use of hooker to refer to a sex worker. He used cronyism and connection to high-ranking officials to get away with his riotous army encampment. Despite some legends, historical records do not seem to indicate that Hooker was a drinker and partyer himself, he just tolerated such behavior among his soldiers.

Despite the tantalizing hints of etymology in Hooker’s name, it is unlikely that he is the source of the term. The use of hookers to denote a sex worker first appeared in print in 1845. Hooker didn’t become a noteworthy public figure until the 1860s. However, it is entirely possible that contemporary rumors about Hooker’s behavior in the 1860s helped increase the popularity of the term due to incorrect assumptions that he was, in fact, responsible. When this happens, it is referred to as a false etymology, meaning a common misinterpretation of a word’s origin.

In what is now known as the Lower East Side, there is a point of land on the East River that was once known as Corlear’s Hook under both Dutch and British rule. It was named after the schoolmaster Jacobus von Corlaer who settled a plantation on the land in the 1600s. As early as 1816, the street was notorious for “streetwalkers” or sex workers. The Christian Herald noted that the neighborhood served as “a resort for the lewd and abandoned of both sexes” and its “streets abounding every night with preconcerted groups of thieves and prostitutes.” The 1859 Dictionary of Americanisms defined hooker as “A resident of the Hook, i.e., a strumpet, a sailor’s trull. So called from the number of houses of ill-fame frequented by sailors at the Hook (i.e., Corlear’s Hook) in the city of New York.”

The ferry terminal and shipyards of the district became exceptionally well known for their high concentrations of sex workers. It appears the sex workers began to be referred to as “hookers” by the 1820s, in reference to the neighborhood’s name. This connection is a more likely source for the term in its printed use in 1845 since, as referenced above, General Hooker was not yet a well-known figure. Conversely, Corlear’s Hook was famous in New York City due to being the site of some of the first tenements ever built in the city. It also served as the site of a cholera hospital during the New York summer of cholera in 1832.

The neighborhood continued to be a site of poverty with waves of immigrants arriving from Germany in the late 19th century. So many came that it was referred to as “Little Germany” for a time; however, other groups of immigrants started to arrive soon after. Italians, Romanians, and Eastern European Jews were just a few of the many ethnic groups that settled in the area during the late 19th and early 20th centuries. In 1935, the neighborhood became the home of the first public housing project in the US. The community has been strongly gentrified within the last 20 years.

An even older etymological possibility comes from the 16th-century use of the word hooker to mean pickpockets or petty thieves. As prostitution has almost always been illegal and considered harmful, it isn’t too far-fetched to think a term for a petty criminal could be expanded to include the trade of sex workers. The use of hooker for thieves was part of the thieves’ cant or peddler’s French, that thieves used in Great Britain at the time. Hooker specifically referred to thieves that used poles with a hook on the end to steal goods. The association with hooks feeds into another possible etymology: fishing.

Even in modern English, one can find references to “hooking” or “landing” a spouse, both of which come from the practice of fishing. The verb “to hook” can be defined as “catching hold and drawing in” which certainly could be applied to the art of seduction in flowery prose. The continued association between romance and catching a fish even today could hint at a much older origin of the term hooker than even Corlear’s Hook. However, it is an interesting coincidence to note that the highest concentration of sex workers in that neighborhood was located in shipyards, which may have housed many fishing vessels. Such incidents often give rise to false folk etymologies.

Two common French slang terms for sex workers, accrocheuse and raccrocheuse, share the root word accrocher, a French verb for “to hook.” You may also notice the root etymology for the craft term crochet in accrocher. The shared etymology in French and English of the more literal physical meaning of hooking something could point to that potentially being the ultimate source. In etymology, this would be studied under comparative etymology, which is looking at how two languages may share a familiar source of meaning. However, it is entirely possible that the definition traveled from English to French or vice versa via another source.

Interestingly, if the word hooker does come to English from French, it would not be the only word referring to a sex worker to do so. The slightly archaic but still used “harlot” for a sex worker is originally a French term. It is from Old French, of obscure origin, and was initially used to refer to vagabonds. By Middle French, it had come to be used to refer to lascivious men and women. From there, its use to refer to prostitutes wasn’t a massive jump and was established by the early 15th century.

Sex work, or prostitution, is often called the world’s oldest profession. References can be found to female prostitutes as early as the 18th century BC in the Babylonian Code of Hammurabi. Prostitution has been documented in almost every culture and appears in many ancient and religious texts. The status of sex workers has varied dramatically throughout eras and cultures with some, like French courtesans and Japanese Oiran, having relatively high stature while others, including modern American sex workers, are seen as immoral lawbreakers. Common terms that have been used to refer to sex workers in American English include doxy, whore, trollop, strumpet, call-girl, escort, and street-walker.

Some of these terms, like escort and street-walker, have clear etymologies that refer to the real actions the workers undertake. Street-walkers are typically used to refer to sex workers that literally walk streets in neighborhoods or districts notorious for prostitution in an attempt to search out customers directly. Escort applies to the courtesan-like companionship services that many escort sex workers offer. In both cases, the etymology is obvious and easy to determine.

Words like doxy and strumpet have a more convoluted history. Doxy appears to have originated from a German word for doll, dokke. It originally referred to a rogue or vagabond’s female partner, but the meaning deteriorated over time to mean a sex worker. Strumpet has its roots in either Latin or Dutch, with arguments for both. Latin’s struprata is a form of the verb “to have illicit sexual relations with” while the Dutch strompen means to stride or stalk. Both could logically apply to sex work, but there are not clear enough textual sources for either to be declared correct. The complex etymology for the various words for sex worker shows just how complicated, convoluted, and confusing the field of etymology can be for only one word alone.

The Conversation – Dehumanizing Sex Workers: What’s ‘Prostitute’ Got To Do With It?

I News – Sex Workers Or Prostitutes? Why Words Matter