America's World War II Black Aviators Had to Fight Tooth and Nail to Serve Their Country... and Then Fought For It 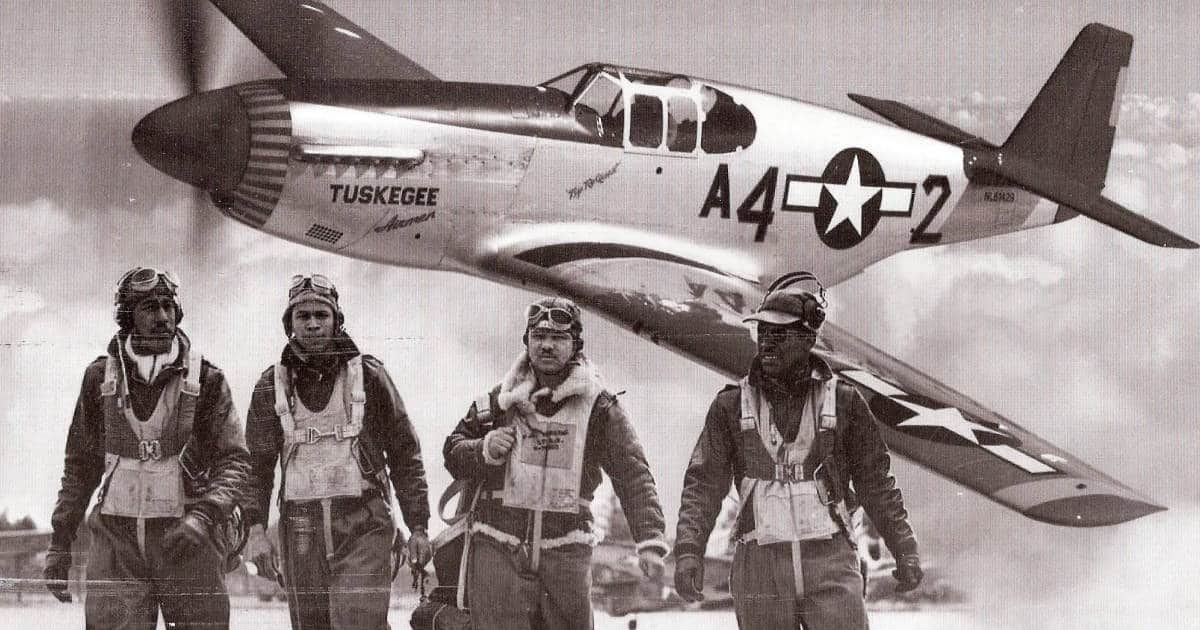 Expansion: From the 99th Pursuit Squadron to the 332nd Fighter Group

After Operation Corkscrew, the 99th flew in support of Operation Husky, the Allied invasion of Sicily in July of 1944. Once airfields were secured in Sicily, the black flyers relocated from North Africa to that island, then flew in support of the Allied invasion of Italy that September. The 99th was then tasked with providing close air support to the US 5th Army during some of its major operations, such as the capture of Foggia and its vital airfields, and the amphibious Anzio landings. Attached to the 79th Fighter Group, the black flyers of the 99th saw significant action as one of eight fighter squadrons defending the Anzio beachhead from German aerial attacks.

On January 27th to 28th, 1944, the eight squadrons defending Anzio collectively shot down 32 German airplanes, with the 99th claiming the highest score among them, with 13 kills. The following week, the 99th was assigned to the Twelfth Air Force and tasked with protecting harbors, escorting convoys, and flying armed reconnaissance missions. The 99th also provided close air support to the French and Polish armies during their assault on Monte Cassino in May of 1944. The unit distinguished itself in the latter engagement, first surprising and devastating German infantry massing for a counterattack, then bombing and strafing a nearby strongpoint, forcing its surrender to French colonial troops. That performance earned the 99th its second Distinguished Unit Citation.

In the meantime, the training base in Tuskegee kept producing more black aviators, and by February of 1944, there were three all black fighter squadrons ready and waiting in the US: the 100th, 301st, and 302nd. The units were shipped to North Africa, where they were combined into the all-black 332nd Fighter Group. The new group with its novice squadrons was then shipped to Italy, where it was joined by the now-veteran 99th Pursuit Squadron in June of 1944.

The Tuskegee Airmen initially flew P-40s, then were switched to Bell P-39 Airacobras in March of 1944, and upgraded to P-47 Thunderbolts in June. They were finally equipped in July of 1944 with the airplane with which they became most associated, the P-51 Mustang. Operating out of Ramitelli Airfield in the city of Campomarino on the Adriatic coast, the 332d Fighter Group was tasked with escorting the Fifteenth Air Force’s heavy bombers.

From then until war’s end, the Tuskegee airmen accompanied the Fifteenth Air Force’s bombers on strategic raids. The black flyers flew cover on missions targeting oil refineries, marshalling yards, factories, and airfields, that took them to Italy, Yugoslavia, Greece, Romania, Austria, France, Czechoslovakia, Hungary, Germany, and Poland. The 332nd earned an impressive combat record while escorting the heavy bombers, whose crews referred to the black flyers as “Red Tails” or “Red Tail Angels” because of the distinctive red paint the unit used on its airplanes’ tails. They earned another nickname from their opponents: “Schwarze Vogelmenschen“, or ”Black Birdmen”.

The Tuskegee Airmen’s most famous mission, in which they went up against German Me 262 fighter jets, came on March 24th, 1945. That day, colonel Benjamin O. Davis led 43 P-51s of 332nd Fighter Group as bomber escorts for Fifteenth Air Force B-17s, who flew a 1600 mile round trip to raid a tank factory in Berlin. The Luftwaffe put up stiff resistance, sending up FW 190s, Me 163 Komet rocket fighters, and 25 Me 262 jet fighters. Tuskegee Airmen Roscoe Brown, Charles Brantley, and Earl Lane, all managed to shoot down Luftwaffe jets over Berlin that day. The 332nd Fighter Group earned another Distinguished Unit Citations for its feats on that mission.

In total, the all black squadrons flew 1578 combat missions, including 179 bomber escort missions, and put up some pretty good statistics while they were at it. They lost bombers on only seven missions, for a total of 27 airplanes, compared to an average loss of 46 bombers for other Fifteenth Air Force P-51 fighter groups. They shot down 112 enemy airplanes, destroyed another 150 on the ground, and damaged 148 more. On the ground, they destroyed 600 rail cars, plus 350 trucks and motor vehicles. They also destroyed 40 boats and barges, plus a German torpedo boat.

Collectively, the Tuskegee Airmen earned three Distinguished Unit Citations (DUC). The first went to the 99th Pursuit Squadron for its performance during the aerial assault on Pantelleria in June of 1943. The 99th earned another DUC in May of 1944, for actions at Monte Cassino. The third Distinguished Unit Citation went to the 332nd Fighter Group (including the 99th Pursuit Squadron plus two other black squadrons, the 100th and 301st) for action over Berlin in March of 1945.

Despite the predictions of many that blacks were unsuited to fly combat, the Tuskegee Airmen turned out to be some of the best fighter pilots in the US Army Air Forces. During the conflict, Tuskegee Airmen earned 96 Distinguished Flying Crosses, a Silver Star, 14 Bronze Stars, 744 Air Medals, and 8 Purple Hearts. Their accomplishments came at a price. Nearly a thousand pilots were trained at Tuskegee, of whom 355 were deployed overseas. 68 of them were killed in combat or accidents related thereto, another 12 were killed in training and on non-combat missions, and 32 were taken as prisoners of war.

The numbers might have spoken for themselves, but predictably, they did little to silence racists who continued to attack the black airmen. Nonetheless, after the US military was finally desegregated in 1948, the veteran black pilots blossomed in the newly formed United States Air Force, and found themselves in high demand. The 332nd Fighter Group was deactivated in 1949, as part of the Air Force’s plan to achieve racial integration. As a last hurrah, shortly before deactivation, Tuskegee Airmen of the 332nd Fighter Group won first place in the US Annual Gunnery Meet – a competition that included shooting aerial targets, strafing ground targets, and dropping bombs.