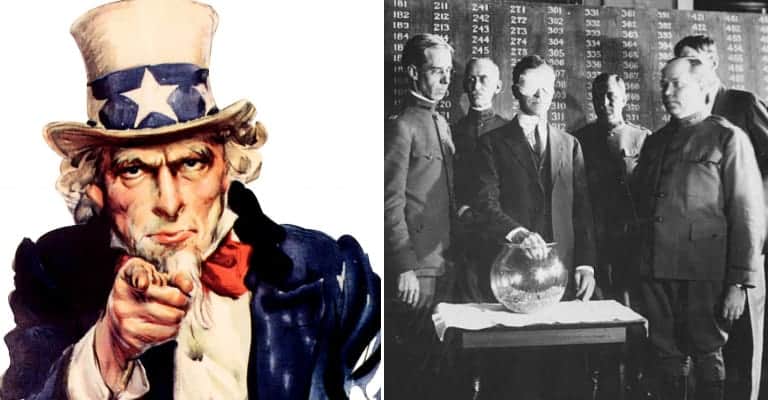 14. Opposition to the draft during World War One

As with all of America’s iterations of conscription, that of the First World War met with opposition both socially and politically. Conscientious objectors were punished by the military for non-compliance with the law, often in the army prison at Fort Leavenworth, Kansas. In 1918 the army created military tribunals to consider the cases of conscientious objectors and others who were opposed to the draft. The tribunals found over 500 to be insincere in their objections and those convicted were for a wide variety of crimes. At least 17 were sentenced to death, though most sentences were commuted after the war. The Selective Service Act granted conscientious objector status to members of the Amish, Quaker, Mennonite, and Church of the Brethren congregations only.

Political opposition to the draft (as well as to American involvement in the war) came from several sources, including radicals, socialists, anarchists, and some labor unions. Political opposition led to legal challenges to the Selective Service Act which reached the Supreme Court in 1918. The opponents to the Selective Service Act presented the argument that the law violated the 13th Amendment to the Constitution, which had barred involuntary servitude and slavery in the United States. The Supreme Court ruled in 1918 that the Act was constitutional. The draft ended with the war in 1918, and in 1926 the Army designed a modernized draft process and system, though it did not immediately impose it.

During the 1920s and 1930s, the Army and Navy, in a rare event of inter-service cooperation during those years, created the Joint Army-Navy Selective Service Committee. Designed to address the issues of manpower requirements for both of the services then extant (the Marine Corps being part of the Navy) the committee completed its work, but Congress refused to fund nor authorize a peacetime draft, out of fear of the isolationists and the America First movements. In 1940, with the Germans sweeping across France and Britain about to face them alone, Congress relented to public opinion polls which indicated that more than 70% of Americans favored compulsory military training for young men.

16. Voluntary enlistment was eliminated at the end of 1942

On December 5, 1942, via Executive Order 9279, men 18 to 37 years of age were banned from voluntarily enlisting for the duration of the war. The purpose of the ban was to protect the nation’s manpower pool, while at the same time easing the overtaxing of the various military branches’ training facilities. The draft provided the manpower for all branches until the end of the war, the Army demanding a term of duration plus six months, and the other branches offering different terms, though all were for at least as long as the war would run. From December 1942 until the end of World War II, all enlistees in the armed forces first received an invitation from their draft board.

Near the end of 1942 the national lottery system which had been sufficient for peacetime was discarded in favor of a system of local draft boards. By the end of the war there were more than 6,000 such boards in the United States. The use of local boards allowed those who wanted to enlist, but couldn’t due to the Executive Order, to use their influence if they had any to persuade their local draft board to call them up as quotas needed to be met. Few did, at least according to surviving records. By mid-1943 the military was calling up 200,000 men per month and absorbing them into its training facilities, which were likewise expanding exponentially.

17. Opposition to the draft during the Second World War

Because the changes wrought by Executive Order 9279 meant that the vast majority of the more than 9 million men in uniform in all services at the beginning of 1944 were draftees. This included almost two thirds of the junior officers leading them. There was opposition to the draft, from conscientious objectors (COs) and from racially motivated groups. Elijah Muhammed and his small Nation of Islam organized resistance to the draft among blacks in the urban communities of the north, including New York. Muhammed was eventually sentenced to five years in prison for his efforts to disrupt the workings of the Selective Service System.

There was organized resistance to the draft in the Nisei camps where Japanese-American families were interned when the draft was extended to Japanese-American men in 1943. Over three hundred Japanese-Americans who refused to report to their draft boards were tried and convicted of felonies, and most were sent to military prisons, though they were for the most part released after the war. The America First and American communist party groups which opposed the draft for the most part changed their tune following the German invasion of the Soviet Union in 1941. During and following the war about 16,000 Americans went to prison for draft evasion. The draft was suspended in 1946 and the Act which authorized it expired in 1947.

18. The Cold War draft and the Korean War

In 1948 the Selective Service System was reactivated to meet the needs of the military as the Cold War began to unfold. The 1948 Selective Service Act required the registration of all men ages 18 to 26. A call to active duty could result in a term of service for up to 21 months, and five years of reserve service. A system was created for the purpose of drafting medical personnel for active military duty. In 1950 President Truman declared a national emergency after the North Korean invasion of their southern neighbor. During the ensuing Korean War and the American involvement until 1953, over 1.5 million men were drafted into the Armed forces. Additionally many WW2 veterans serving in the reserves were called up.

Following the Korean conflict opposition voices in Congress and the national press rose to protest the existence of compulsory military service during peacetime. Changes to the national military posture following the Korean War focused on the use of nuclear weapons, then deliverable only by the Air Force on a reliable basis. Manpower requirements of all services dropped throughout the remainder of the 1950s while the Selective Service System developed a complex pattern of deferments based on the lobbying of congressmen for the benefit of their constituents. But the draft remained in place, and was applied in a new and novel way during the 1960s.

19. The draft and the Vietnam War

During the war in Vietnam, especially during the buildup of American forces which began in 1965, the draft was the primary source of Army, Navy, Air Force, and Marine personnel which served in theater during the long war. The draft was used to man the Army officially. But it was also used as a threat. Those with a low draft number and unable to obtain deferments often sought refuge from the threat of serving in the jungles and rice paddies by voluntarily enlisting in other branches of the services, where they were less likely to encounter combat, though the Navy and Air Force expanded their operations in Vietnam throughout the 1960s.

The draft and the war it supported grew increasingly unpopular as the decade unfolded and the manner in which the United States prosecuted the war, and falsely reported on its progress to its President and its people led to massive protests. Burning draft cards and fleeing along an underground railroad to Canada became the escape for many. Others escaped the draft by obtaining deferments, using their individual connections to receive medical exemptions. Colleges offered temporary respite from the draft. By the end of the 1960s the protests against the draft reached a crescendo, and as the Americans withdrew from Vietnam, plans for a new American military emerged.

20. The all-volunteer military returned to America in the 1970s

Richard Nixon promised to end the draft during the presidential campaign of 1968, the most tempestuous year of the tempestuous 1960s. After winning the election he allowed himself to be convinced that ending the draft would be viewed as a sign of American weakness, and he took no action to keep his promise. In 1973,under the prodding of the Senate, the last national lottery for the draft to date was held. The US military gave itself over to being all-volunteer, a difficult task given the anti-military attitudes prevalent in the country after the humiliation of Vietnam. Since then a draft has not been held, but the Selective Service System remains in place in the United States.

Since July 1980 it has been the law in the United States that men, (both US citizens and immigrant non-citizens) once they reach the age of 18 must register with the Selective Service System within 30 days of their 18th birthday. Those ineligible for military service for any reason are not exempt from the requirement. Since 1989 a Health Care Personnel Delivery System (HCPDS) has been in place, since health care professionals are the most likely to be drafted in any future conflict, where extensive training on complex systems is required of today’s military. The likelihood of a general draft remains remote, but the US government and military is prepared and retains the authority to exercise one if necessary.

“The Confederation Period and the American Historian”. Richard B. Morris, William and Mary Quarterly. 1956

“The War of the Rebellion: A Compilation of the Official Records of the Union and Confederate Armies”. Library of Congress. 1901

“Conscription and Conflict in the Confederacy”. Albert Burton Moore. 2012

“The Constitution of the United States, Article 1 Section 8”.

“When America’s Most Prominent Socialist Was Jailed for Speaking Out Against World War One”. Erick Trickey, Smithsonian.com. June 15, 2018

“The Debate Behind US Intervention in World War II”. Susan Dunn, The Atlantic. July 8, 2013

“The Evolution of the All Voluntary Force”. Bernard Rostker, RAND Corporation. Online