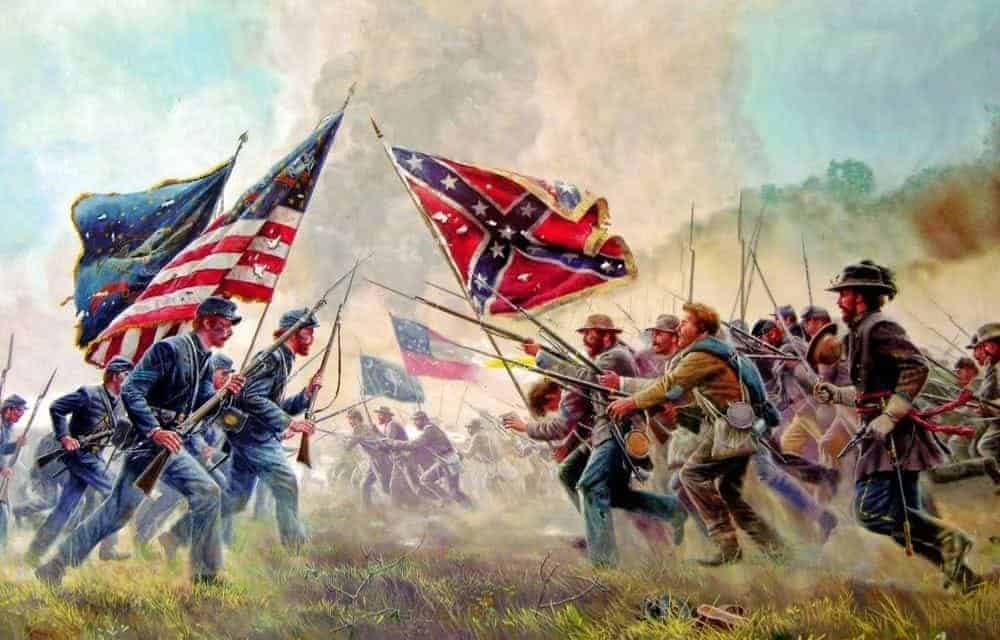 Part of the Overland Campaign, The Wilderness Battles were just part of a group of battles between Ulysses S. Grant and Robert E. Lee in the spring of 1864. Grant used this campaign to shepherd Lee’s forces into a tight spot in Richmond and Petersburg Virginia, where he would eventually cause Lee to surrender his army in April of 1865.

The Overland Campaign was a major offensive for the North, one filled with wins and losses for both great generals.

What needs to be understood about the Overland campaign is that it wasn’t about one battle for Grant. In the grand scheme of things, the campaign was about moving Lee into a position where Grant could eventually beat him, which is what he did. But if you look at the campaign from a casualty perspective, the North lost many more than the South did. What was important for Grant, however, was the eventual outcome.

The Battle of the Wilderness took place in the countryside outskirts of Spotsylvania. The battle itself was inconclusive, as Grant moved on his forces on without being able to move past Lee’s army.

This particular battle took place in a dense woods, and each of the two armies carried out maneuvers to flank, however neither of them gained any ground.

By May 7, after two days off getting nowhere, Grant disengaged and moved south-east towards the Spotsylvania Court House, where he hoped to keep moving Lee into the position he needed him to be in.

By late 1862, the war was in full swing. As you’ve no doubt seen in the battles that have preceded this one on this list, the number of casualties was only one thing that determined the winner of each particular battle. For example, morale plays a big role in what side is determined as the winner.

The Battle of Stones River, or the Second Battle of Murfreesboro as it is sometimes known, is one battle where the casualty numbers don’t tell the whole story. This was a series of battles at the end of 1862 and the beginning of 1863 that determined the winners of Middle Tennessee. The battle itself was determined as inconclusive, but the North was able to successfully repel the southern attack twice, and forced the Army of Braxton Bragg to retreat and move on.

This came after a huge defeat at the Battle of Fredericksburg. The morale boost that the North received after the Battle of Stones River was something that was very important. By forcing the Confederate withdrawal from Middle Tennessee, the Union was able to establish a major supply base in Nashville, which opened up their ability to support battles further into the South.

The reason for this was that Bragg retreated based on false information. He received information that the Union army had reinforcements on the way, and chose to retreat instead of continue his attacks, that had been rebuffed at least three times during the three day battle. This is another example of when correct information and communication play a large role in determining the outcome of the battle.

In April of 1862, the Army of the Tennessee, under Union General Ulysses S Grant, had moved deep into Tennessee. And While the fight for Middle Tennessee (the strategic goal for the state) wouldn’t be decided until the end of 1862, the Union had made inroads towards that goal.

The Army of the Tennessee, as it should be noted, is completely different from the Army of Tennessee. The latter fought for the Confederacy, while the former was named after the river. The reason for this is simple, the army made it so deep into Tennessee after traveling on the Tennessee River.

Grant’s army had encamped at Pittsburg Landing, Tennessee on April 5 1862. The Confederate Army, led by General Albert Sidney Johnston, launched a sneak attack on April 6, but was rebuffed, but was able to cause Grant’s army to take a lot of casualties. Their hope was to move Grant’s army away from the Tennessee River and into the more swampy land of Owl Creek. Because the Confederate lines got confused, the Union army was instead able to reform its defensive lines to the northeast along the river. This allowed them to overcome the surprise attack and strengthen their lines to drive the Confederates back.

Johnston was mortally wounded in the battle. The death of their commander and their break for the night due to exhaustion, allowed the Union time to bolster its numbers with the Army of Ohio, which arrived on April 7.

Up until that point in the war, The Battle of Shiloh was the bloodiest in American History. And while the war would have many battles that were bloodier, Shiloh remains an important battle as it allowed the Union to create inroads into Northern Mississippi.

Antietam, or the Battle of Sharpsburg, is the bloodiest battle of the Civil War that happened on a single day. And while the numbers of killed and wounded is impressive and tragic, as are all battles, what is important at Antietam is the outcome strategically. As can be seen throughout most of this article, if one were to go only on total numbers of casualties, the South would have won the war.

What isn’t shown is that the North had a lot more men in almost all of these battles. For example, at Antietam, the Union had 75,000 men and the Confederacy had only 38,000.

While Antietam has been labelled by historians as tactically inconclusive, strategically it was a Union victory.

From a military history, Antietam is very complex. Over the course of several hours, the two armies, led by Major General George B McClellan for the Union and General Robert E. Lee for the Confederacy, battled back and forth, using many different military tactics.

What makes Antietam a strategic victory for the North was that it enabled President Abraham Lincoln to announce the Emancipation Proclamation. This is simply because the North was able to repel Lee’s attack into Maryland (one of his attempted invasions of the North). It is also said that this particular ‘victory’ by the North, and the subsequent announcement of the Emancipation Proclamation prevented Britain and France from considering any help for the Confederate States of America.

Whether this is true or not, is debatable. Many historians think that Britain would have stayed out of the American Civil War no matter the particular outcome of any battle or political maneuver. Either way, Antietam was a major battle that had grand implications on the ultimate end of the Civil War.