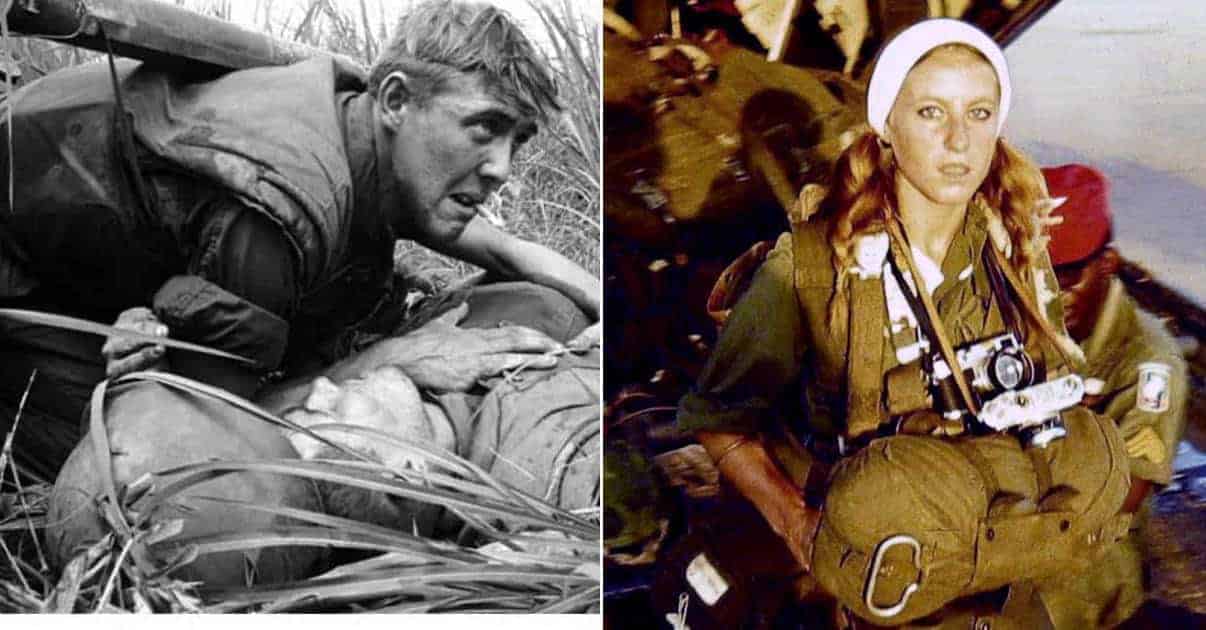 Although Catherine Leroy may not be a household name, her work covering the Vietnam War really deserves to be better known. Leroy arrived in Vietnam with no experience as a photojournalist but her tenacity and bravery soon found her work making the covers of major publications like Life Magazine. Here is her story.

Catherine Leroy was born in Sannois in the Paris suburbs on August 27, 1944. After high school, Leroy briefly studied music at the Conservatory of Music and considered a career as a classical pianist. She ultimately dropped out of college and began working to save enough money to pursue her real passion in life, which was to work as a photojournalist. Leroy said in an interview that as a child “photojournalists were my heroes. When I looked at Paris Match as a girl, to me that was an extraordinary window to the world.”
So, infused with a spirit of adventure and her passion for photojournalism Leroy bought a one-way ticket to Vietnam in February 1966 aged just 21 and having with her only $200 and a Leica M2 camera. Leroy arrived in Vietnam with no professional experience as a photojournalist and as she put it herself, “she had never heard a shot in anger.”

Leroy somewhat, fortunately, met a friend of Life magazine photojournalist Charles Bonnay on her flight to Vietnam, who then introduced her to Bonnay who was in Vietnam covering the war. Bonnay helped Leroy to obtain her press credentials and she began working for a French picture agency before freelancing for both United Press International and Associated Press. At that time Leroy was earning just $15 per published picture.
Leroy entered a male-dominated environment and at the time she was the only female war photographer in Vietnam following the death of Dickey Chapelle, who had been killed by a grenade in 1965. Despite her diminutive stature, (Leroy was just five feet tall and weighed about 85 pounds) she quickly immersed herself in this hostile new world and spent the majority of her time in Vietnam alongside the soldiers in battle. Leroy captured some iconic images of the Vietnam War, but she did not promote herself or her work, so she remained virtually anonymous to the general public.

In 1967, Leroy became the only accredited photojournalist in Vietnam to make a combat jump when she jumped alongside the 173rd Airborne Brigade during Operation Junction City. Although false rumours were circulated at the time that Leroy had only been given permission to jump alongside the paratroopers because she had slept with a colonel, the truth was that Leroy was an accomplished parachutist. Leroy had gained her parachuting licence as a teenager and had completed 84 jumps prior to her combat jump alongside the 173rd. The following morning after her jump, Brig. General John R. Dean pinned on her fatigues the paratrooper wings and a gold star signifying a combat jump.

Wounded and captured by the enemy
During the Battle of Hill 881 North (so called because of its height in metres above sea level) Leroy captured some of her most iconic images of the Vietnam War. In a series of photos Leroy captures the moment that nineteen-year-old Navy Corpsman, Vernon Wike reaches a fallen marine during the battle. In one of the images, Wike places his head on the marine’s chest to listen for a heartbeat. Leroy’s photo appears to capture the moment that Wike realises that his comrade has died. In the next photo of the series, Wike’s expression is one of absolute anguish and despair.

Leroy says it was that moment during the Battle of 881 North that made her realise why she was in Vietnam – to capture those moments of humanity during the brutality of the Vietnam War. For Leroy, it “summed up her first fifteen months of war.” Later that year Leroy went on to win the George Polk award in the News Photography category.
Two weeks after the Battle of Hill 881 North, Leroy was seriously wounded alongside marines during a mortar barrage in a demilitarised zone on May 19, 1967. As Leroy told Life Magazine: “I took a couple of pounds of shrapnel in my 85-pound frame.” Leroy actually credited her camera which was hit by some of the shrapnel for saving her life. Leroy spent a month recovering on the U.S.S. Sanctuary which she described as being “almost like a holiday” after having become accustomed to working alongside the troops five days a week.
In 1968, Leroy and her French colleague Francois Mazure were captured by the Viet Cong during the Battle of Hue. They had their hands tied behind their backs and their cameras confiscated. Fortunately for Leroy and Mazure, they met another Frenchman and his Vietnamese wife and two children who had been captured by the Viet Cong. When a Viet Cong officer arrived, the French man’s Vietnamese wife was able to translate on behalf of Leroy and Mazure. Once the officer discovered they were French photojournalists he ordered them to be freed and have their cameras returned to them.
The officer even permitted Leroy to take photos of the Viet Cong soldiers which became a front-page story for Life Magazine on February 16, 1968, entitled, “A remarkable day in Hue: The enemy lets me take his picture.” Most Viet Cong soldiers were happy to have their photos taken with the exception of one soldier, who demanded that Leroy give him the film from her camera. Leroy was able to keep her photos by duping the soldier by handing his a completely blank role of film.
In 1969 Leroy left Vietnam and returned to Paris but she had a hard time reintegrating back into normal life. Leroy described herself as being “extremely shell-shocked” after she left Vietnam. She added: “It took me years to get my head back together because I was filled with the sound of death, and the smell of death. I was extremely cool under fire. I didn’t show anything. But when I went back to Saigon the horror of it would hit me.”

Life after Vietnam
In 1972 Leroy and Frank Cavestani co-directed a documentary on American veterans opposed to the Vietnam War entitled “Operation Lost Patrol.” In 1975 Leroy went to Beirut to cover the Lebanese Civil War where she lived and worked with Agence France-Presse war correspondent, Bernard Estrade. In the same year, Leroy covered the fall of Saigon and the end of the Vietnam War.
In 1977 Leroy became the first woman to win the Robert Capa Gold Medal – “for best published photographic reporting requiring exceptional courage and enterprise” for her work covering the Lebanese Civil War. In 1983 she co-wrote the book God Cried, which documented the siege of Beirut by the Israeli Army in 1982. Leroy was again honoured for her work in 1987 when she was awarded Picture of the Year by the National Press Photographers Association for her reporting of the bombing of Tripoli, Libya. In 1997 the University of Missouri presented Leroy with a honorary award for Distinguished Services in Journalism.

In 2002 Leroy created the website, “Under Fire: Images from Vietnam” which featured images from the preeminent war photojournalists, including Nick Ut who captured the iconic image of the badly burned Vietnamese girl Kim Phuc, entitled The Terror of War. In 2005 Leroy’s book, Under Fire: Great Photographers and Writers in Vietnam was published on the 30th anniversary of the end of Vietnam War.
In what turned out to be her last story, Leroy photographed Vernon Wike in his home in Colorado, almost forty years after she photographed the young Navy Corpsman during the Battle of Hill 881 North. On July 8, 2006, Leroy passed away from lung cancer aged 61, leaving behind a legacy of iconic images.

“In Her Own Words, Photographing the Vietnam War.” Elizabeth Herman, lens.blog.nytimes.com. September 27, 2017.