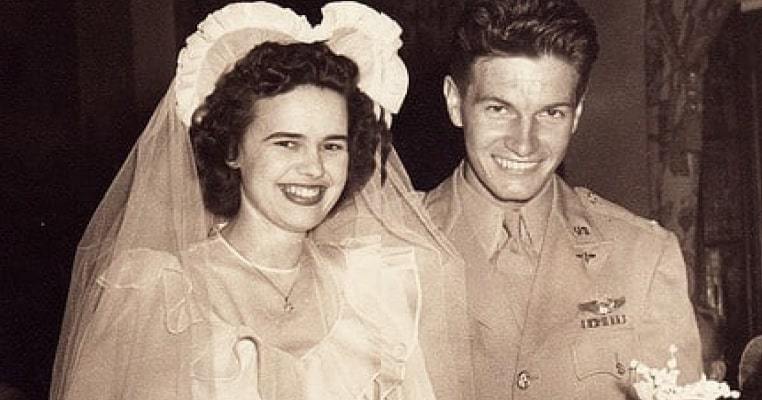 How long would you wait for you wait for your sweetheart to come home from war? A year? A decade? Or how about 62 years? That’s how long Peggy S. Harris of Vernon, Texas, waited for her Billie. An airman, he went missing in action during the final months of World War II. It soon became apparent that, however much his family as well as Peggy hoped and prayed, Billie wouldn’t be coming home. But, unlike so many war widows, Peggy never had anywhere to go and pay her respects. Billie’s body was never found, and his final resting place remained a mystery. Or at least it did. Then, six decades after his plane was shot down over northern France, Peggy finally received the news she’d been waiting almost all her life to hear.

Theirs was a romance like so many others in the 1940s. They were young and in love. And, though Europe burned and the United States was at war, they were optimistic about their future together. Peggy first met Billie thanks to his father. She worked alongside her future father-in-law, serving as an instrument mechanic at an airplane factory in Altus, Oklahoma. He was forever telling her how dashing his son, just three years Peggy’s senior was. Then, one day, he brought her a letter from his Billie. Their great romance had begun.

The start of a great love affair

At first, it was a romance conducted through the U.S. Mail. With the war waging, Peggy was required to work all hours at the factory. Billie, meanwhile, was a cadet in the Army Air Corp, itching to earn his wings and play his part in the fight against Hitler. Then, with the kindle of their love having been nurtured with written conversations about poetry and opera, Billie was due leave, so he headed to Altus to meet his pen pal. As a practical joke, Peggy hid in the cockpit of one of the planes being repaired in the factory, hoping to surprise him. And, though he spotted her as soon as he arrived at the Altus factory, he was immediately smitten.

Whatever reservations Peggy may have had to begin with soon vanished. She was in love too. Just weeks after first meeting in person, Peggy accepted Billie’s proposal of marriage. They wed in the Florida, where he had been sent for advanced training, He was a handsome young man of 21, she a pretty young Southern Belle of just 18. But Billie and Peggy were married for just six weeks before the call came: a troop ship transporting pilots over the Atlantic had been attacked. Replacement flyers were needed. Billie was going to war. In October of 1943, he deployed. Wary of a second attack, the airmen’s wives were told to keep their deployment a secret until they had safely reached Europe. That was the last time Peggy was to see her husband.

Upon reaching Europe, Billie was stationed in the south-east of England. As part of the 355th Fighter Squadron, he and his P-51 Mustang plane were tasked with protecting bombers on their runs to Germany and back. Then, following the successful Normandy landings, his mission changed. Now Billie and his comrades were to hit ground targets in enemy territory. It was dangerous work. Some days, Billie would fly several missions over the English Channel and into the danger zone. But Billie was an ace. He won two Air Medals with 11 oak leaf clustered as well as the Distinguished Flying Cross. But what really mattered to Peggy was the fact that he soon logged more than 60 flights. That meant he would be eligible for leave and could head home to be with her. Billie even wrote his beloved a letter saying he would be home soon. It was dated 8 July, 1944.

Later that same month, Peggy received a telegram. It said that her Billie was “missing in action”. Confusingly, it stated that he went missing on 7 July. Perhaps there was hope? She told the War Department that she had received a hand-written note dated a day after Billie was alleged to have been shot down. In the confusion of war, mistakes were made all the time. Could it be that a simple administrative error had mixed Billie up with another unfortunate airman? Sadly not. The War Department looked into the matter. Officials confirmed that Billie went missing on 17 July. They had no further news. Distraught, and unable to work with warplanes any longer, Peggy quit her job and waited. And waited.

A couple of months later, Peggy received an official note from the Supreme Headquarters in Allied France (SHEAF). It stated that Lt. Harris had returned to the United States, taking the leave that was owed him. Surely he wouldn’t have returned without informing his wife? More confused than ever, Peggy sought help. The Red Cross stressed that Billie may still be being ‘processed’ and would get in touch soon. But he never did. “Billie’s parents and I choose to believe that he was back in the United States,” she told the 54th Fighter Group website for veterans and their relatives. “We were hoping that he was in a hospital somewhere, and maybe just didn’t know who he was or had lost his memory. We had heard of cases like that.”

A family haunted by a fate unknown

Even with the war long over, nobody could confirm what had happened to Billie. Peggy and his family were first informed he was missed, and then that he had been killed in action. Tragically, his parents passed away in the 1980s, still not knowing what became of their son. But the story didn’t end there. Billie had a cousin, Alton Harvey, who was born after he had gone missing in France. As a young man, Alton grew up on stories of his brave, pilot cousin. Once he himself had retired from work, he decided to devote his energy to finding out what happened to Billie. Weren’t there cases of American pilots being buried in France? With the U.S. Army now making files relating to the period publicly available, he decided to request any files they had on a Lt. Harris. A few days later, Alton got an answer: Yes, there were files on this downed airman. And they had been requested six months previously by a lady in France.

After 60 years, closure at last

Alton was intrigued to say the least. Why would someone in France want to see a file on his long-vanished cousin Billie? Well, the person in question, a lady by the name of Valerie Quesnel, was something of an amateur historian herself. She lived in Les Ventes, a small, picturesque town in Normandy, in the north of France. In 2004, the town, like many others in the country, decided to mark the 60th anniversary of French liberation from the Nazi occupation.

As well paying tribute to local members of the resistance and citizens who had been killed in air raids, a special ceremony would also honor a Canadian pilot shot down over Les Ventes, a certain Lt. Billie D. Harris. The town reached out to the French embassy in Canada to invite them to attend the ceremony, and the day was a great success. Reports of the ceremony were published in veterans’ newsletters and caught the eye of another amateur historians. This airman, Mr Huard, the president of the Normandy Association for the Remembrance of Aerial, asked. Are you sure he wasn’t American?

It was Valerie Quensel who looked into the matter. Mr Huard was right. Lt. Harris was indeed an American airman. She also confirmed that he was buried at the Normandy American Cemetery at Colleville-Sur-Mer, just a few miles from Les Ventes. To learn more, she got in touch with the U.S. Army archives department and soon had a folder filled with 200 pages of information relating to the case. These were the same 200 pages Billie’s cousin Alton was sent just a few weeks later.

As soon as he received the folder, he drove to Peggy’s house. She finally had the answer she’d been waiting 60 years to hear. Peggy immediately wrote to Quensel. She thanked the people of Les Ventes for ensuring her Billy had a proper burial, and then for honoring his memory in the years and decades that followed. Bonded by Billy’s fate, the two ladies became pen pals. In Easter of 2006, Peggy flew to France. She would be the guest of honor at a special ceremony dedicated to her husband. With her family, she made the long journey and was greeted like a celebrity by the people of Les Ventes.

It was here that she finally learned the truth. Billie had been shot down on 17 July, 1944. His plane crashed in a forest just outside of the town. Members of the resistance were quickly on the scene, but Billie was already dead. With the Nazis closing in, they were unable to retrieve the body, but they did take the deceased pilot’s name. In their hurry, they read Billie D. Harris as Billie D’Harris and assumed he was a French aviator, a mistake that would lead to decades of confusion.

The day after, Peggy finally visited the Normandy cemetery where Billie lay. She was finally able to say goodbye. For all that she went through, she stressed that she holds no grudges. Indeed, she has only ever expressed her gratitude to the people of France. Peggy never remarried. In the years that followed her discovery, she sent flowers to Billie’s grave around ten times a year. According to some, his is the most-decorated grave in all of northern France, a much-belated happy ending to this tale of true and enduring love.

“A World War II widow discovered her husband is a hero in France”. Blake Stilwell, We Are The Mighty. August 2020.