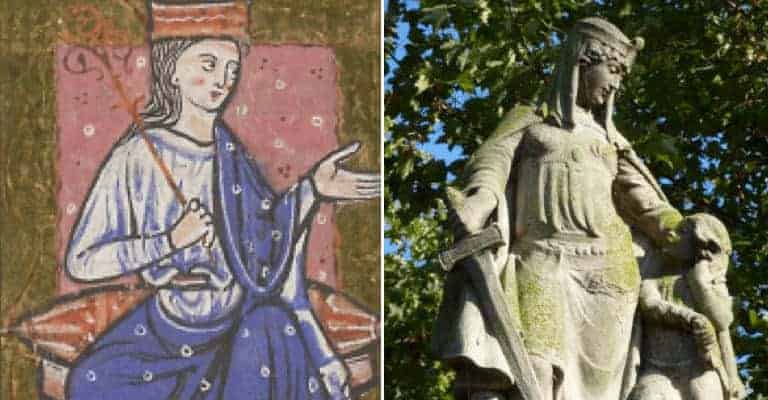 Aethelflaed’s marriage was her first political act- albeit one over which she probably had no control. Her marriage was a strategic match, one designed to solidify the bonds between Wessex and the neighboring kingdom of Mercia. Since 882AD, Aethelred, an ally of King Alfred’s, had ruled Mercia. Aethelred had liberated his kingdom from Viking rule with the help of Wessex. In return for this help, Aethelred signed a pact with Alfred that acknowledged Wessex’s supremacy. The seal on that pact was the marriage to Aethelflaed.

So, in 886AD Aethelred became Aethelflaed’s husband. He was much older than his bride who could not have been more than eighteen. By the standards of the day, the security offered by her marriage was the most Aethelflaed could hope to contribute to her new Kingdom. Saxon women occupied a very much subordinate role, and even if her new husband had been a king rather than a Lord, Aethelflaed would not have been referred to as “Queen’. Her mother had only ever been known as â€˜The wife of the king.’ Most people would have expected the Wessex princess to keep to the background and bear her husband heirs.

Around 888AD, Aetheflaed fulfilled this duty by bearing a daughter, Aelfwynn. However, shortly afterward, Aethelred’s health began to fail, and his wife involved herself in the running of the country rather more than was usual for a woman. Aethelflaed started to stand in for Aethelred, presiding over courts and signing diplomatic treaties. She began to build a reputation for efficiency and justice. She also very astutely identified herself entirely with Mercia’s interests. She also courted the church, financing projects such as St Oswald’s Priory in Gloucester and the building of Chester Cathedral. The Mercians quickly realized that she was no Wessex pawn. They began to trust her.

In 911, Aethelred died, and the ealdormen of Mercia swore allegiance to her. Aethelflaed now became â€˜Lady of Mercia” a title that designated her Mercia’s sole ruler. A group of senior noblemen ceding power to a woman was unprecedented. In part, it was a response to Aethelflaed’s abilities and the confidence the nobles had in her leadership. It was, however, also a pragmatic move to preserve Mercian independence. For to reject Aethelflaed simply because she was a woman would have created a power vacuum and made Mercia vulnerable to attack- from Danes and Saxons alike.

Any dispute over the succession to the Mercian â€˜throne’ would have signaled weakness. The Vikings, who had already invaded and subdued Mercia once may have been tempted to try again. However, the threat to Mercia did not just come from the Norsemen. In 899AD, King Alfred had died and his son, Edward had taken over as King. There was every chance that as Alfred’s successor and Aethelflaed’s brother Edward would have taken the opportunity to take over Mercia himself.

By the early tenth century, trouble with the Danes was once again on the horizon. Now, Aethelflaed came into her own. Aethelflaed’s ability as a military leader was something that her brother Edward found irksome. After Aethelflaed’s death, he made sure that the Anglo Saxon Chronicles downplayed the achievements of his sister and Mercia and emphasized his own. However, there is another source for Aethelflaed’s triumphs: “The Mercian Register” or ” The Annals of Aethelflaed.”Its text is fragmented, but its validity is confirmed by the fact that parts of it were incorporated into the Chronicles.

The Register makes it clear that Aetheflaed and Edward were at worst partners in their war against the Danes. However, Aethelflaed’s foresight in making preparations against Danish attacks also suggests a lead role. The situation had begun to escalate even before Aethelred’s death. Viking settlers expelled from Ireland tried to occupy land just outside Mercian Chester. Aethelflaed appeared to appease the Norsemen, giving them new land around the Wirral. However, she was actually stalling them while she made preparations. She was right. The Vikings attacked Chester in 907 AD but failed to breach the city’s walls due to Aethelflaed’s preparations.

The Lady of Mercia now began to strengthen her kingdom. She refortified Chester, Tamworth, Stafford, and Bridgnorth along the Mercian borders. Ten new fortified towns were also constructed, including the town of Warwick. Aethelflaed knew a further attack was just a matter of time. At the same time, she began to renew alliances, particularly with her brother in Wessex. Together, the combined forces of Aethelflaed and Edward started the re-conquest of old Mercian territories held within the Dane law. In 910AD, Aethelflaed finally made her name in battle when she led Mercian forces at The Battle of Tettenhall. The Danish troops were massacred, and three Viking Kings killed during the fight. Aethelflaed the warrior was born.

Aethelflaed went militarily from strength to strength. In 917AD, her troops regained the town of Derby, the capital of one of the Five Boroughs of the Dane law. This started the collapse of the southern Danish kingdoms. The following year, she liberated the ancient city of Leicester, and her army began to drive the Danes back further north. York was now under threat of being reclaimed by the Saxons. Terrified of losing their final stronghold, the Danes were just about to submit and come to terms when Aethelflaed fell ill. She died, possibly of dysentery in Tamworth on June 12, 918 and was buried next to her husband in St Oswald’s priory, Gloucester.

The Mercian nobility tried to stave off Wessex’s domination by elevating Aethelflaed’s daughter, Aelfwynn as their new Lady. However, Aelfwynn was no Aethelflaed. However, by the following year, Edward had usurped his niece and absorbed Mercia into Wessex. By incorporating his sister’s kingdom, into his own, Edward now acquired influence over most of England, laying the foundations for his son, King Athelstan to be proclaimed as the first “King of the whole of Britain.”

AethelflÃ¦d, Lady Of The Mercians, David Crowther, The History of England, 2011