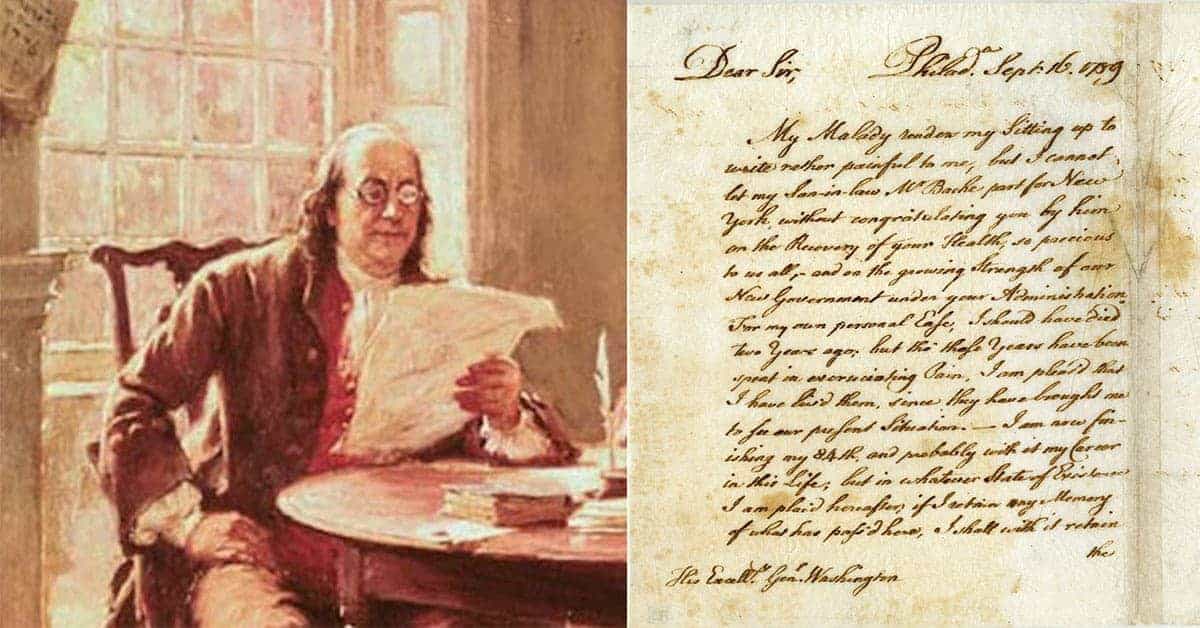 Benjamin Franklin identified himself throughout his life as a printer. He was that, but his interests and contributions to humanity far exceed the mere production of words on a page. He was a prolific writer on diverse topics, including philosophy, weather, humor, political opinion, the nature of governments, the nature of man, science, and more.

His experiments and observations in electricity informed scientists in Europe, with whom he corresponded as an equal. He was a shrewd and effective diplomat, representing first the colonies to an increasingly hostile government in England, and then to a French court from whom he obtained a treaty of alliance, helping America to gain its independence.

He provided a steady and calm presence to the Second Continental Congress, helping to smooth over frequently contentious and always emotional debates over America’s future. He repeated that role at the Constitutional Convention when the delegates reached impasse after impasse, guiding the opposing factions to find workable compromises. He founded America’s first free lending library and was instrumental in establishing its first urban fire department. Both his native Boston and his adopted Philadelphia honor him, and he is equally memorialized in London and Paris.

A man of contradictions, Franklin invented a wood stove which served to heat drafty rooms more evenly than a fireplace, but he espoused the healthful benefits of “air bathing” – the practice of sitting naked before an open window in cold air. He was fond of swimming and was often spotted swimming stark naked in the waters of the Schuylkill River in Philadelphia, or the Seine in Paris.

Related: Benjamin Franklin Loved to Compose In The Nude!

He developed a musical instrument in which glasses with varying amounts of water therein were transported via a revolving mechanism to within reach of the player’s fingers. The musician rubbed his fingers on the rims of the glasses to produce musical tones. Mozart wrote several pieces specifically for harmonica, so would Beethoven in a later day. His advice was sought in all areas of expertise, including the subject of women and marriage.

Some of Franklin’s most memorable and humorous observations – and advice – were on the subject of women. When Franklin first went to France he was well into his seventies, but he rapidly became to women what today would be known as a sex symbol. Franklin played that role to the hilt, and used it to enhance his – and by extension America’s – image as a virile and active nation. The role continued in his personal life, where he was always something of what was called a rake in his day, – a womanizer – and his musings in published works and private letters reflected his attitudes.

It is sometimes difficult to determine when he is merely being amusing and when serious, but his letters on the subject of women – while probably not considered politically correct today – remain pertinent. One of the most famous, and infamous, was a letter of advice addressed to one young man, but clearly intended for all young men.

The letter in question was written in 1745 when Franklin was 39 years of age. Although seemingly young in today’s world, Franklin was considered to be a font of acquired wisdom, having by then established both his literary and scientific reputations. The letter was written in response to a query from the son of a well-known Philadelphian seeking advice on the selection of a mistress.

Franklin was married at the time, a common-law marriage to Deborah Read, with two young children in the household, a third having died of smallpox nine years earlier. Franklin’s son, who resided in the house, was his openly admitted illegitimate offspring who had been born in 1730 and who was being raised somewhat reluctantly by Deborah.

Franklin began his letter – entitled Advice to a Friend on Choosing a Mistress – by trumpeting the advantages of marriage as a natural outlet for sexual urges. He likened an unmarried man to one blade of a scissors, in other words, a useless tool. “A Single man has not nearly the valueâ€¦” of a man in the married state, Franklin counsels, and recommends that his correspondent consider rather than a mistress, “â€¦A prudent healthy wifeâ€¦”.

Still, Franklin recognizes the impetuousness of youth as a motive for rejecting a marital union and offers further counsel regarding the type of woman a young man should seek for a mistress, both for personal gratification and public reputation. Franklin recommended that a wise man should “â€¦prefer Old women to young onesâ€¦” and recognizing the unconventional nature of his advice provides a list of his reasons for coming to what was likely a surprising conclusion.

The first reason is experience. To Franklin older women have more experience with the world and the people in it and thus have the ability to discuss life in general from a wiser perspective. He finds older women to be able to participate in more “â€¦agreeableâ€¦” conversations.

He then points out, along somewhat the same lines, that as older women begin to lose the natural beauty of youth they compensate by making themselves more pleasing by offering more services, such as nurturing and daily care of their consorts. He also points out the advantage of older women being less likely to bear children, “â€¦which irregularly produced may be attended with much inconvenience.”

Franklin makes much of older women being more discreet in their daily lives, a fact which will serve to keep an illicit affair hidden from the prying eyes of society, greatly to the benefit of a rising young man’s reputation. He argues that should the affair be discovered, society would be more likely to forgive the trespasses of an older woman, both out of sympathy for their age, and understanding of their need to care for someone younger than they.

You May Also Interested: Why Benjamin Franklin to Live Estranged From His Wife for Nearly Two Decades?

He then becomes risquÃ©, arguing that the aging process begins at the top and works down in all upright animals, including humans, and that although the face and upper body may be showing the ravages of time the lower body likely is not.

He also points out that in the dark, “â€¦all cats are grayâ€¦” and that “â€¦enjoyment with an older woman is at least equal, and frequently superiorâ€¦” when vision is obscured. Franklin makes an affair with an older woman virtuous “â€¦They are so gratefulâ€¦” while comparing it to the “â€¦debauching of a virginâ€¦” as ruinous to both lady and gentleman. He ends his letter with an admonition to heed his original advice, which is to enter the state of marriage, and closes as “â€¦Your Affectionate Friend.”

Whether the letter was ever delivered – it was found in Franklin’s papers rather than the intended recipient’s, who is widely believed to have been Cadwaller Colton – or if Franklin was serious has been the subject of debate among historians and Franklin scholars. Satire was an important communication device of the day and was often presented in the form of letters.

Franklin was a practitioner of somewhat risquÃ© writing; in his autobiography, he included a passage describing his own attempts at seduction. He famously produced an article on flatulence describing it as a natural act and thus nothing of which to be ashamed. It was entitled, Fart Proudly. He may well have written the letter with tongue in cheek.

But Franklin’s reputation and recorded events indicate a proclivity on his part for following his own advice. He maintained mistresses during his sojourn in London (on the trip to that post he became the first to chart the Gulf Stream) and again later in Paris. By the time he reached Paris, in 1777 he was in his seventies, but he rapidly became known as a ladies man in the Court of Louis XVI, then considered a virtue among the French.

Rumors of his fathering numerous children in Paris have long followed him, but considering his age this seems unlikely. Nonetheless, he was known for playing chess with women while he luxuriated in his bathtub, or playing a game with another man while the lady of the house soaked in the tub and discussed the game with the players.

By the time he got to Paris Franklin displayed a marked affinity for younger women, perhaps because at his age there were fewer of his generation around. Madame Brillon, a French aristocrat and member of the King’s Court of Versailles, was but 33 when she began what became a lengthy affair – probably platonic – with the American diplomat in Paris. Franklin penned numerous letters to her which were highly suggestive, and directly urged her to consummate their affair, but no historical evidence that they ever did so exists.

Franklin’s Advice to a Friend on Choosing a Mistress was censored during the 19th century, as Victorian prudence objected to the bawdy nature of its commentary. Sections of his Autobiography and other papers were likewise subjected to censorship laws in different jurisdictions across the United States.

At least a part of the motivation for suppressing the letter and similar documents was a desire to maintain the image of the Founders as morally upright, irreproachable men of character and sobriety. In the 20th century, Franklin’s letter was frequently cited in arguments for overturning obscenity laws. The argument was made that his letters demonstrated the true nature of life and correspondence of their age, rather than what Justice William O. Douglas called the “â€¦Victorian hypocrisy,” of a later age.

“The First Amendment was the product of a robust, not a prudish, ageâ€¦” Douglas wrote in a dissenting Supreme Court decision. “â€¦None of the fathers of the country were any more concerned than Franklin with the question of pornography.” Over 250 years after it was written, Advice to a Friend on Choosing a Mistress is a window into its time, and while not necessarily sage advice, it remains pertinent to history.