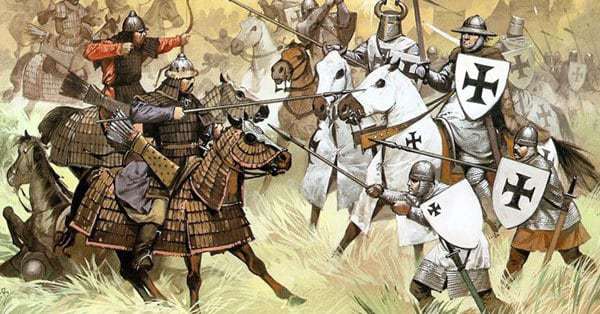 The Battle of Ayn Jalut

After destroying Baghdad Hulegu hunkered down for a time, collecting his spoils and receiving new offers of submission and troops from the surrounding region. Once again reinforced, he set out in 1259 to complete the task that his brother Mongke had given him by pushing to Egypt. They crossed the Euphrates on a pontoon bridge and made for Aleppo. While Aleppo fell quickly the soldiers in the central citadel continued to defend their last refuge for four weeks before surrendering. In a show of respect for their courage Hulegu allowed the survivors of the citadel to live.

From Aleppo the Mongols advanced to Damascus, which gave in without a fight. Now only the only significant authority capable of challenging the Mongols remaining in the region were the Mamluks of Egypt. Hulegu sent an emissary to Sultan Qutuz carrying a message that read, “You have heard that we have conquered a vast empire and have purified the earth of the disorders that tainted it. It is for you to fly and for us to pursue…. We mean well by our warning, for now you are the only enemy against whom we have to march.”

The Mamluks, descendants of slave soldiers who had unseated their masters, were not interested in being enslaved once again. They responded to Hulegu’s threat by killing the emissary. With this action Qutuz could expect to face the Mongols’ full wrath, but then fate intervened. As Hulegu was preparing his advance towards Egypt a rider arrived with news from China: Mongke Khan had died of dysentery. Fearing that the Khan’s death might destabilize the empire Hulegu withdrew along with a considerable portion of his force, leaving his lieutenant Kitbuga to chastise the Mamluks.

Back in Cairo Qutuz had decided that his capital could not endure a Mongol siege, and that his best chance for success was to meet the Mongols in the open. The Mamluks crossed Gaza and positioned themselves to intercept the Mongols in Galilee at a place called Ayn Jalut, which quite appropriately is also the site where David is said to have slain Goliath. Upon arriving Qutuz hid a portion of his army in the highlands nearby to surprise the Mongols if given a chance.

Once the battle began the Mamluks were able to lure the Mongol force into this trap by repeatedly hitting them and then withdrawing closer to the highlands. The unexpected appearance of Mamluk archers and cavalry from the hills overwhelmed the Mongols, surrounding them. Not easily discouraged, the Mongols fought fiercely to break out of the encirclement, prompting Qutuz to personally join the battle to try and prevent a breach. Despite Qutuz’s efforts some of the Mongols did manage to escape and regroup, but he held the battlefield. The Mamluk’s had done what no other power had been capable of – they had stood up to a Mongol advance and won.