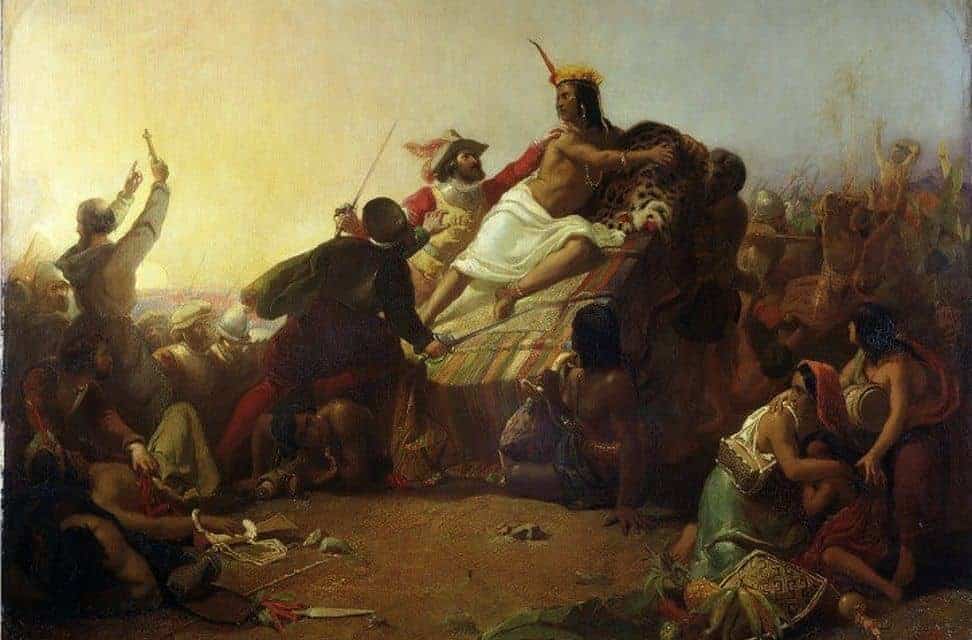 The discovery of Machu Picchu by Hiram Bingham in 1911 helped bring global attention to the once mighty Inca civilization. The Kingdom of Cusco was founded, probably by Manco Capac, in 1197, and it slowly grew through assimilation and warfare. By 1438, it had become the all-powerful Inca Empire and began expanding far beyond its original borders. Under the leadership of the supreme leader (the Sapa Inca) Pachacuti, the Inca Empire conquered a swathe of land around the size of America’s original 13 colonies.

For a relatively short period, the empire was the most powerful in South America but it soon met its match in the form of Spanish conquistadors led by Francisco Pizarro. The Spaniards reached Inca territory by 1526 and within seven years, they had all but conquered the Inca. The key moment was the Battle of Cajamarca in 1532 when a Spanish force of no more than 168 men defeated up to 8,000 Inca without a single death and only one minor injury. In reality, Cajamarca was more of an ambush than a battle but it unquestionably changed the course of history.

The voyage of Columbus in 1492 and the Treaty of Tordesillas, signed two years later, ensured Spain laid claim to most of the Americas. This element of control was only solidified by the conquest of the Aztecs in Mexico by Hernan Cortes. Francisco Pizarro was one of many Conquistadores lured to the Americas by tales of riches beyond a man’s wildest dreams. He was part of the Vasco Nunez de Balboa expedition to Panama in 1513. Pizarro became close friends with the governor of Castilla de Oro and when it was deemed time to get rid of Balboa, Pizarro was told to arrest the explorer and bring him to trial. Balboa was executed in 1519.

Inspired by the exploits of Cortes, Pizarro began his first expedition to Peru in 1524. It was a disaster and Pizarro was lucky to escape with his life. His second expedition, which began in 1526, proved far more successful. However, the new governor refused to allow a third expedition in 1528, so Pizarro returned to Spain with treasure including gold, silver, llamas and a handful of natives. He was determined to return and put together an expeditionary force which arrived in Panama in December 1531. The group contained around 180 men and 30 horses, and they sailed down South America’s west coast. They arrived at Tumbes in Peru in 1532 and were joined by 50 horses and 100 men led by Hernando de Soto.

They say that timing is everything and Pizarro proved it because the timing of his arrival was fortuitous to say the least. His group began moving inland in May 1532 and he soon learned about the bitter civil war between Atahualpa and Huascar. Pizarro had adopted a smart policy of ingratiating himself to the natives with good manners and gestures of goodwill. As a result, they faced zero opposition on the road to Cusco as Atahualpa elected not to stand in the way of the Spaniards. A combination of arrogance and curiosity meant that the conquistadores were within striking range of the Sapa Inca.

Huascar had become Sapa Inca in 1527 having succeeded his father, Huayna Capac. He was also the beneficiary of good timing because the original successor, Huascar’s brother, Ninan Cuyochi, was leader for only a few days before he succumbed to smallpox-like Huayna did. However, his half-brother, Atahualpa, also laid claim to the throne and so began a bitter and violent civil war that lasted for five years. Both sides had approximately 60,000 men apiece but Huascar suffered defeat at the Battle of Chimborazo and Battle of Quipaipan. He was captured after the latter loss and Atahualpa occupied Cusco.

Although Atahualpa had emerged victorious, the civil war severely weakened the empire with tens of thousands of men killed in the fighting. Moreover, the disharmony between the warring factions meant it was a simple matter for Pizarro and his men to march on Cusco. When Atahualpa was ultimately captured, Huascar and his followers in the province of Cusco celebrated instead of looking to fight the invaders.

By November 14, 1532, Pizarro had reached the outskirts of the city of Cajamarca and saw an Incan army with between 50,000 and 80,000 soldiers. His men were frightened as they marched towards the Inca camps but knew that any sign of weakness would result in their deaths. He asked his brother, Hernando, and a trusted officer, Hernando de Soto, to walk to the middle of the camp and speak to the emperor. It is said that the two conquistadores were imposing figures as they boldly marched into Atahualpa’s camp in full armor.

Contrary to popular belief, Atahualpa was not intimidated by the soldiers or their horses. The Spaniards invited him to meet in Cajamarca the following day and the Sapa Inca agreed. Pizarro knew that luring the Incas into a trap was their only chance of victory so he ordered his entire cavalry unit and most of his men to hide in the town’s buildings. A couple of small cannons, named falconets, were used to offer cover in the square and the Spaniards waited for several hours before the Inca Emperor and his retinue showed up.

Initially, Atahualpa announced that he wouldn’t be coming for another day but Pizarro, through a messenger, persuaded the Sapa Inca to come after, telling him that a great banquet had been prepared in his honor. He left most of his army behind and was accompanied by around 6,000 unarmed nobles. Atahualpa was naïve and had no idea of the character he was dealing with. When they arrived at the town square, the Inca were surprised to see no Spaniards present and called out an inquiry.

Eventually, Friar Vincente de Valverde arrived with an interpreter. He carried a missal and a cross and approached Atahualpa while announcing that he was an emissary of the Spanish crown and God. Valverde demanded that the Inca Emperor accept Catholicism as his faith and Charles V of Spain as his ruler. The friar gave him either a book (which they said was the writing of God and the King) or a letter. Either way, Atahualpa was infuriated and tossed it to the ground. Little did he realize it, but he was just moments away from losing everything.

Soon after the letter incident, Pizarro gave the order to attack and his men wasted no time as they opened fire and immediately attacked the Inca nobles. A combination of guns and a cavalry charge confused the Inca and they panicked. The Spaniards knew they had to capture the Sapa Inca as soon as possible and targeted Atahualpa from the moment they began the attack. The Inca had never faced firearms before and had no idea how to react so they fled in terror.

When Pizarro rushed at the emperor on horseback, he expected his opposite number to flee but he stood still. Atahualpa was being carried by a large group of his nobles so the Spanish cut off the hands of the emperor’s bearers. They couldn’t believe their eyes when the Inca ignored their suffering and used the stumps of their hands to continue carrying Atahualpa. Eventually, one soldier pulled the Inca Emperor off the throne and Pizarro realized the importance of keeping the Sapa Inca alive. Therefore, he prevented his men from killing Atahualpa on the spot. It is said that Pizarro blocked a sword strike aimed for the Inca Emperor and received a deep wound for his troubles.

When the dust settled at Cajamarca, somewhere between 3,000 and 7,000 Inca lay dead. No Spaniards died and only one was wounded. The conquistadores knew nothing of Inca customs and laws; such as the one where laying hands on the emperor was punishable by death. This lack of knowledge probably helped them defeat the Inca because the soon to be conquered people had no clue how to react to such audaciousness.

This was apparent in the aftermath of Cajamarca because, had the Inca army responded, it would have easily defeated the Spaniards, weapons or not. Remember, there were still several thousand-armed warriors in the vicinity and they vastly outnumbered the enemy. Alas, the shock of Atahualpa’s capture destroyed the army’s morale so instead of launching an attack, they refused to engage in a fight even after their nobles had been routed.

Two days later, the Spaniards ransacked the Inca army camp and found an extraordinary amount of gold, silver, and precious stones. The Sapa Inca realized that the Spaniards lusted after these glittering items and offered to fill a room of 22 x 17 x 8 feet once with gold and twice with silver within a couple of months. He fulfilled his promise but after a few months, the Spaniards realized that keeping the emperor was dangerous as the Inca general Ruminahui was preparing an attack. Pizarro staged a mock trial and Atahualpa was sentenced to death. He was strangled in Cajamarca on August 29, 1533.

The Inca Empire didn’t last long after his death because Pizarro and his men marched on Cusco and entered the city on November 15, 1533, a year to the day after his triumph at Cajamarca. The Incas rebelled against the invaders with archaeological evidence suggesting there was an uprising in 1536. The last Inca leader, Tupac Amaru, was killed by the Spanish in 1572. Meanwhile, there was a struggle for power between Pizarro and Diego de Almagro. Although Pizarro ‘won’ this particular battle, he didn’t live long enough to enjoy it as Almagro’s followers murdered him in Lima on June 26, 1541.