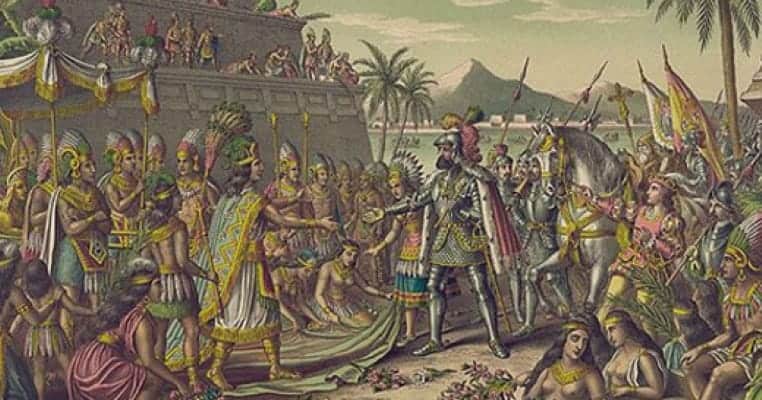 Montezuma received the first reports of contact with Europeans in 1518, when an expedition under the Spaniard Juan de Grijalva set sail from Cuba, and explored the Central American coast from the Yucatan Peninsula to the Rio Panuco. Montezuma ordered that he be kept informed of any further sightings of the mysterious foreigners, and posted extra watch guards along Mexico’s Gulf coast in order to ensure that his orders were carried out.

In February of 1519, Spanish conquistador Hernan Cortes (1485 – 1547) landed with a force of about 600 men on Mexico’s eastern coast. Montezuma was promptly informed, and he sent emissaries to meet the newcomers. However, the Aztec ruler was unable to figure out what to do when his emissaries and spies reported back to him about the Spaniards, so he adopted a wait and see attitude. As things turned out, that failure to mount a vigorous and rapid response to the armed foreigners arriving at his shores, would prove to be a bad decision.

After subduing the region surrounding today’s Veracruz, Cortes marched inland towards the Aztec capital of Tenochtitlan, defeating and allying with natives en route. Chief among those allies were the Tlaxcala, whom Montezuma had twice tried, and twice failed, to subdue. Avowed enemies of the Aztec ruler and his empire, the Tlaxcala would prove more than eager to exert themselves to the utmost in order to pay Montezuma back and bring him and his realm low.

Natives who refused to join Cortes were massacred, as occurred in the city of Cholula. As Cortes described it in his letters, after capturing the city, he destroyed and burned it to the ground, while the conquistadors ran riot, killing about 3000 Cholulans in a few hours. Another Spanish eyewitness put the actual number of massacred Cholulans as high as 30,000. By the time he reached Tenochtitlan, Cortes had a large native army, surrounding a core of Spaniards.

Throughout, while the Spaniards were rampaging along eastern Mexico, subduing local tribes and allying with others, all the while drawing ever closer to the Aztec capital of Tenochtitlan, Montezuma dithered and grew indecisive. He sent Cortes gifts of gold, and ordered him to come no further, but the gold only whetted the conquistadors’ appetite, and spurred them on. When it became clear that the Spaniards had no intention of staying away, Montezuma changed tack, and invited Cortes and his conquistadors into Tenochtitlan in November of 1519, in the hopes of better understanding them and their weaknesses.

Montezuma met Cortes at the approaches to Tenochtitlan on November 8th, 1519, and after exchanging gifts, invited the Spaniard and his men to guest with him at his palace. The conquistadors lived as honoured guests of the Aztec ruler for several months, during which Montezuma foolishly plied them with lavish gifts of gold. He seems to have meant it as a display of his might, as evinced by his indifference to gold, but Montezuma’s generosity only excited the conquistadors’ lust for plunder. The Tlatoani went from host to hostage, when Cortes treacherously seized Montezuma in his own palace, and began to rule Tenochtitlan and the Aztec Empire through the captive ruler.

During his captivity, Montezuma seems to have developed a case of Stockholm Syndrome, and began to identify with his captors. When his nephew Cacama began planning a rebellion against the Spaniards, Montezuma heard of it, and informed Cortes, who promptly arrested and eventually executed Cacama. In the meantime, the Spaniards squeezed Montezuma hard to give them gold, and he complied, ordering his subjects to give the conquistadors what they wanted. Within months, the Spaniards had amassed an estimated eight tons of gold and silver from the Aztecs.

In April of 1520, Cortes had to speed back to Mexico’s east coast in order to ward off another Spanish expedition sent to oust him. He left behind a Spanish garrison of 200 men under a trusted deputy. In Cortes absence, however, his deputy heard rumors of a planned uprising, and decided to nip it in the bud by massacring thousands of unarmed Aztecs in Tenochtitlan’s Great Temple. Whether or not the rumors of the planned uprising had been true, the massacre ensured that a massive popular uprising was triggered against the Spaniards. After dealing with the threat from the rival Spaniards, Cortes rushed back to Tenochtitlan to try and restore Spanish control.

By then, the Spanish garrison in Tenochtitlan had been besieged in Montezuma’s palace. Cortes, with reinforcements, managed to make his way into the palace, only to end up besieged there as well. In an attempt to placate the Aztec populace, the Spaniards trotted out the captive Aztec ruler. A reluctant Montezuma was hauled to the roof of the palace, from which he pleaded with his people to stop attacking the Spaniards. Disgusted by their ruler’s conduct, the Aztecs subjected Montezuma to a barrage of stones that severely injured him, and led to his death three days later. Or at leas that is how the Spanish described it. According to native sources, Montezuma survived his injuries, only to get murdered by the Spanish when it became clear that he was of no further use to them.

Cortes was forced to flee Tenochtitlan, losing half of his men and nearly all of the extorted treasure in the process. He then returned with a powerful native army to subdue the city. After vicious street by street fighting that wrecked much of the Aztec capital, the Spaniards and their native allies finally subdued the city, whose population had been decimated by Old World diseases against which the natives had no immunity. According to sources: “On the day that Tenochtitlán was taken, the Spaniards committed some of the most brutal acts ever inflicted upon the unfortunate people of this land. The cries of the helpless women and children were heart-rending“.

The Spanish built Mexico City and their colony of New Spain atop the ruins of Tenochtitlan and the Aztec Empire. The Natives – former allies and enemies alike – were reduced to de facto serfs, working the large estates, or haciendas, which the conquerors apportioned to themselves. Between massacres, mistreatment, overwork, and Old World epidemics, the native population of New Spain crashed from an estimated 30 million when Cortes arrived, to a mere 3 million by 1568.

ThoughtCo – The Death of Emperor Montezuma

Mexico Lore – The Death of Moctezuma

ThoughtCo. – Emperor Montezuma Before the Spanish