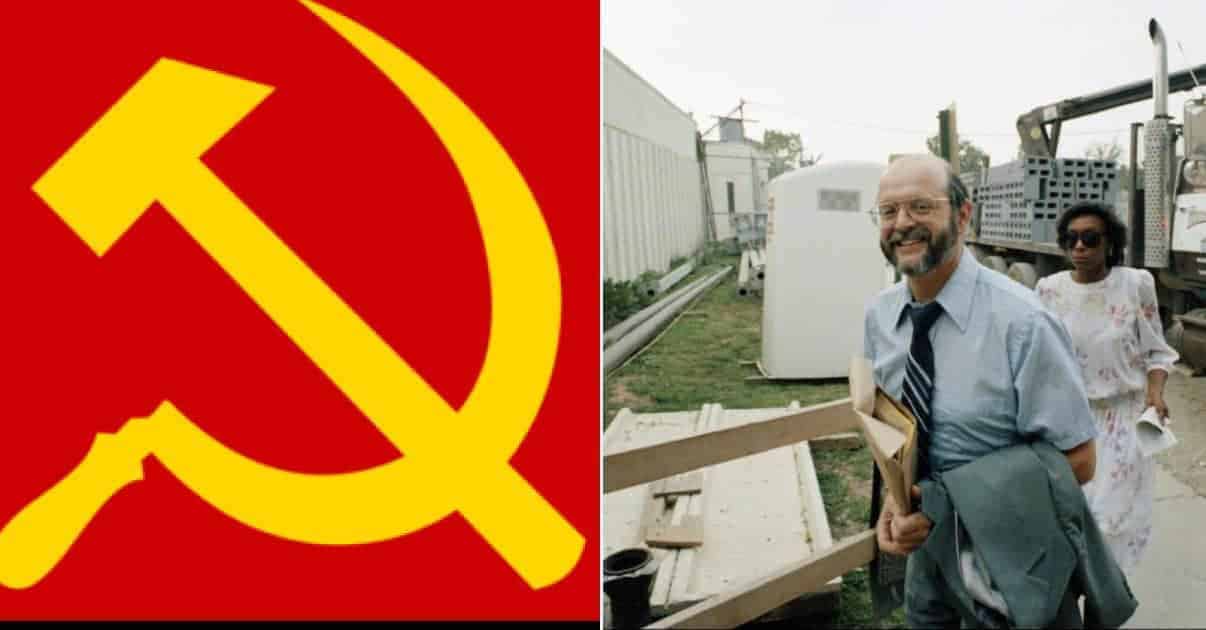 The Rosenberg’s – husband and wife – were American citizens who were the center of a spy ring established largely by Julius to provide information to the Soviets on American atomic weapon research and development. They also illegally obtained and transferred to the Soviets information on other advanced American defense projects, including the development of jet engines for aircraft, submarine sonar systems, and radar systems.

The network they developed included David Greenglass, Ethel’s brother, Harry Gold, and Klaus Fuchs, all of whom were eventually determined to be working for the Soviets. Fuchs was a German scientist who had worked in the British atomic weapon program before joining the American Manhattan Project at Los Alamos. During the Second World War Fuchs transmitted classified information via his handler Gold to the Rosenbergs, who forwarded it to the Soviets.

When Harry Truman informed Stalin that the United States had developed a weapon of previously unheard of destructive power at Potsdam in 1945 – having himself only recently learned of it – he noted that Stalin did not seem either surprised or concerned. Stalin’s knowledge of the atomic bomb’s existence was likely the result of the Rosenberg group.

Julius Rosenberg began working for the Soviet NKVD in the fall of 1942. During the war, he provided the Soviets with a complete proximity fuse – highly classified and used to detonate anti-aircraft shells when they reached a predetermined nearness to their target. When World War II ended only the United States had an atomic bomb, but the Soviets detonated a test bomb in 1949, to the utter shock of American officials and scientists. Investigations soon identified Fuchs as a source of classified material being stolen and provided to the Soviets and before long Julius and Ethel’s role in the espionage was known to authorities.

Since the Rosenberg’s conviction and execution for espionage in 1953 an ongoing campaign has been conducted – led largely by their two sons – to clear their name and establish their innocence, claiming that they were the victims of Cold War paranoia. The release of classified documents from the former Soviet Union has revealed their long-standing espionage activities against the United States. Julius acted as a courier carrying classified information to other Soviet agents, and recruited most of the members of the network which stole it, with Ethel providing advice and guidance. Ethel also collected money from the Soviets as payment for the pair’s services and assisted Julius in concealing his activities. Ethel also actively recruited her brother into the network. Soviet records include the payments made to the pair.

Aldrich Ames was a counterintelligence specialist in the CIA. During the course of his career in US intelligence, Ames spied for the Soviet Union and later the Russian Federation, compromising more US assets than any Soviet spy who preceded him. In 1985, Ames approached the Soviet Union by walking through the doors of their Embassy, motivated by the desire to acquire money to pay off some of his burgeoning debts from an expensive divorce and an equally expensive mistress. He was paid $50,000 on his first contact with the Soviets, in which he established his credentials as a CIA and FBI insider, but according to his own statement provided them little of actual value.

Ames began to reveal to the Soviets CIA and other intelligence agencies assets in place which were providing intelligence on the Soviets to American and British organizations. The CIA was quickly aware that many of their assets were suddenly missing – in Soviet prisons or dead – and that something was wrong which was compromising them to the Soviets.

CIA investigations focused on possible data breaches through wiretaps and bugs, followed by investigations into possible broken or otherwise compromised communication codes. The CIA attempted to blame the losses on another agent who had been suspected of selling information to the Soviets but soon the loss of assets unknown to the second traitor increased CIA suspicion of Ames.

It was Ames’ reckless spending beyond the means of his CIA salary which finally led to his undoing. The CIA increased their monitoring of him through electronic and financial surveillance, old fashioned examination of his household trash, and the use of car monitors which followed his travel. Ames made frequent visits to the Soviet embassy and just prior to a scheduled visit to Moscow in 1994 he was arrested along with his second wife.

Initially, he protested his innocence but later entered a guilty plea to espionage and was sentenced to life imprisonment. Ames stated his actions working for the Soviet and Russian governments led to the compromising of “…virtually all Soviet agents of the CIA and other American and foreign services known to me…”. Ames also allowed the Soviets to feed false information to American agents which was eventually viewed by three different American presidents. At least ten assets he identified were executed by the Soviets or Russian services.

His activities in the FBI helped dictate the type and quantity of information he was able to make available to the Soviets. And much of the information he provided on Soviet agents working for American agencies, served to confirm information given them previously by Aldrich Ames. Hanssen was occasionally careless revealing classified information which drew minor administrative rebukes but little else, despite the expressed concerns of FBI personnel working for him.

In 1977 the Soviets began building a new embassy building and the FBI prepared a tunnel to be used to house equipment which would allow Americans to eavesdrop on Soviet decoding procedures. Hanssen informed the Soviets of the tunnel’s existence – which the FBI had never used – in 1989 in return for $50,000. Hanssen also provided the Soviets with lists of all Soviet agents working for the FBI and other agencies on more than one occasion, again in return for cash payments. The discovery, by a relative, of large amounts of cash hidden on his property led to the recommendation that he be investigated for espionage in 1990, but led nowhere.

After the collapse of the Soviet Union, Hanssen attempted to hide evidence of his treason, concerned that review of Soviet files would lead to his exposure. In 2001 he resumed his double dealings, then sold classified information to the Russians, after determining that he was not under investigation by American agencies.

In February 2001, he was finally arrested by the FBI after an exhaustive investigation, and charged with fifteen counts of espionage for which he faced the death penalty. Hanssen negotiated a plea agreement in which he pleaded guilty to all fifteen counts and was sentenced to fifteen consecutive sentences of life imprisonment. He remains in federal prison.

Elizabeth Bentley was an American born graduate of Vassar College who attended meetings of the American League Against War and Fascism while in graduate school in Florence, Italy. Her association with many of the League’s members, who were communists, led to her joining the Communist Party of the United States (CPUSA) upon her return to America in 1935, and to her new job at New York City’s Italian Library of Information.

The library was mainly a fascist propaganda facility and Bentley indicated her willingness to spy on Fascist Italy for the CPUSA. Jacob Golos worked as Bentley’s handler, and by 1940 the pair were lovers. Unknown to Bentley at the time was Golos’ role as a NKVD intelligence officer. The pair were deeply involved in obtaining American classified information regarding Nazi Germany and forwarding it to the Soviets.

In 1943, Golos suffered a fatal heart attack and Bentley assumed his role in the Soviet espionage hierarchy, although she was plagued by depression over the loss of her lover and a serious drinking problem which went back to her days in Italy. By 1945, Soviet agents were urging Bentley to emigrate to the Soviet Union.

Bentley, possibly through paranoia exacerbated by her heavy drinking, believed that she was being closely watched by Soviet agents and that if she was to go to Russia it would lead to her arrest and execution. In late November 1945, with World War II over, and the Soviet-American relationship rapidly deteriorating, Bentley decided to reveal her spying activities to the FBI.

Bentley informed the FBI of over 150 agents spying in the United States for the Soviets, more than three dozen of them employees of the federal government. The FBI decided to leave Bentley in place and suspicion of her by the Soviets soon led to a recommendation from Moscow that she be eliminated. In the late 1940s, Bentley testified before the HUAC and identified numerous Communists and Soviet spies working in the United States. By the early 1950s the former Soviet spy was a paid informer for the FBI, was converted to Catholicism by Bishop Fulton Sheen, and lectured on the perils of godless communism to largely Catholic audiences. She died in 1963 of cancer, in New Haven Connecticut.

Ronald Pelton was a former intelligence analyst who had worked for the National Security Agency (NSA) when he was arrested and convicted for spying for the Soviet Union in the mid-1980s. Pelton exposed to the Soviets one of the US Navy’s biggest intelligence coups of the Cold War, a submarine operation known as Ivy Bells. US submarines had installed taps on submerged telephone cables in Soviet waters, allowing conversations about naval operations to be recorded and the tapes collected by periodic visits from US submarines.

Pelton informed the Soviets of the wiretap’s existence and the Soviets delayed recovering the device for some time, using their knowledge of the operation to feed false information to the Americans. The device was eventually recovered by the Soviets and is in a Russian museum, clearly marked as property of the United States Government.

Pelton resigned from the NSA in 1979, unhappy with his salary, and worked in various jobs – none involved with intelligence operations. He continued to feed information to the Soviets, based on his own memory and on maintaining contacts with former coworkers. He made several visits to the Soviet Embassy in Vienna, Austria and continued to provide information on what he remembered of American espionage activities and methods to the KGB.

In 1985, senior KGB officer Vitaly Yurchenko defected (temporarily) to the United States and revealed to the Americans that Ivy Bells had been compromised, describing in general terms the physical appearance of the former analyst who had provided the information.

The ensuing investigation soon identified Pelton as the culprit and when they confronted him he confessed to having provided classified information to the Soviets for the sum of $35,000. Charged by the federal government, Pelton was convicted in 1986 and three concurrent life sentences placed him in prison until his release in 2015.