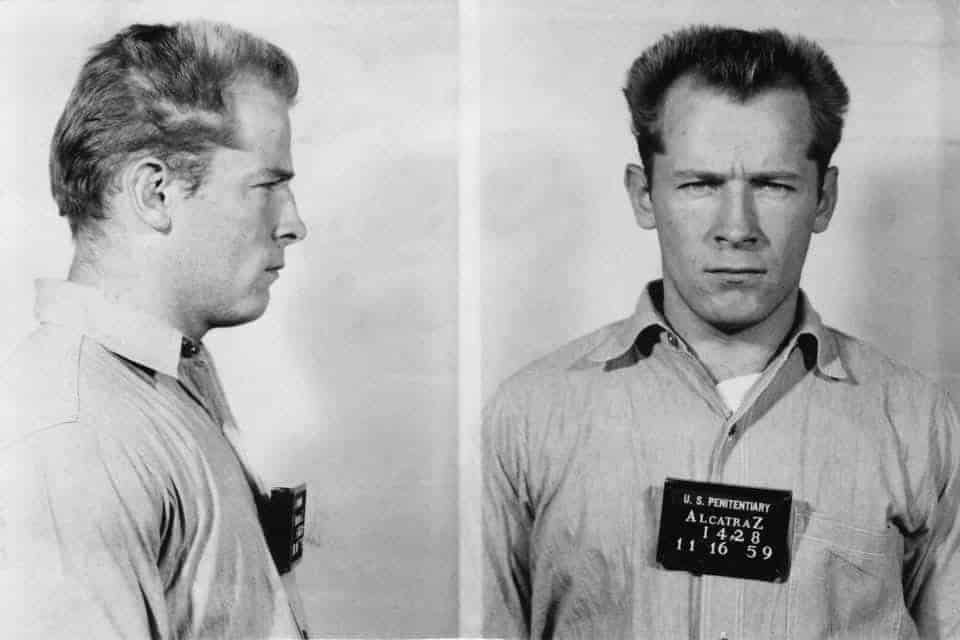 Alcatraz. The Rock. Located in San Francisco Bay, the former island prison was once home to some of America’s most notorious gangsters, thieves, and killers. Alcatraz was utilized as a federal prison from 1933 until 1963. The island’s location over one mile from from San Francisco made it a feared place for criminals.

Although there were several escape attempts during Alcatraz’s 30 year reign as a federal penitentiary, no one ever made it to the mainland. Alcatraz was home to the worst criminals in the country. Alcatraz housed many inmates during the thirty years the island operated as a prison, and below are 6 of the most infamous men who once called The Rock home.

Boston crime boss James “Whitey” Bulger grabbed headlines when he was captured in Santa Monica, California in 2011 after more than 15 years on the run. Bulger was on the FBI’s Most Wanted list for many years after he vanished in 1995, having been tipped off that his arrest was imminent.

Bulger had led a life of crime since he was a teenager in the tough, working-class, Irish enclave of South Boston. He was known as a street brawler and he developed a penchant for committing robberies and hijacking trucks full of goods near Boston’s waterfront. He was in trouble with the law from a very young age, and was first sent away in the 1950s on a bank robbery charge.

After his parole, Bulger returned to his native Boston and picked up where he had left off. He became embroiled in the Boston gang wars of the late 1960s, and eventually took control of the Winter Hill Gang in the late 1970s. Bulger and his associates controlled illegal activities in Boston through force, murder, and intimidation. Though it didn’t come out until much later, Bulger acted as an FBI informant for many years. This partnership helped him and his gang avoid prosecution for decades. Bulger fled Boston in 1995 and lived under an assumed name, mostly in California, until his capture in 2011. Today, the 87-year-old crime boss is serving a life sentence at a prison in Florida.

Undoubtedly the most famous criminal of the 20th century, even kingpin Al Capone was broken down by the desolate hopelessness found at Alcatraz. He once told the prison’s warden, “it looks like Alcatraz has got me licked.”

Capone was born in Brooklyn, New York in 1899 and started his life of a crime as a young man. Around the age of 20, Capone headed to the city that would make him famous; Chicago. In the Windy City, Capone worked under gangster Johnny Torrio, running brothels and working as an enforcer. He rose through the gang’s ranks quickly, and became the boss in Chicago after an assassination attempt on Torrio. Capone transformed the gang into a money-making, and killing, machine. Capone and his men made piles of cash from gambling, brothels, and especially from illegal bootlegging of alcohol. His gang was at war during the late 1920s and 1930s with rival Chicago gangs looking to capitalize on the booze trade that flourished during Prohibition. Dead bodies littered the streets of Chicago as gunmen from all sides took aim at Capone’s multi-million dollar empire.

Local police and the federal government worked to try to put Capone in prison, but they were unsuccessful for years. Finally, Capone was sent away to the federal prison in Atlanta in 1932 after he was convicted for tax evasion. In 1934, Capone was notified he was being transferred to another federal pen, and the news was not good; the destination for the man nicknamed “Scarface” was Alcatraz.

Capone’s mental facilities began to break down while he was Alcatraz, due to a case of syphilis that went untreated for years. He was finally released from Alcatraz on January 6, 1939, but he spent the last year on The Rock in the hospital, the syphilis continuing to eat away at his brain. Capone was then sent to Terminal Island Prison and was paroled for good in November 1939, a shell of his former self. Al Capone spent the rest of his years in Florida, withering away until he finally died after a stroke in 1947. A simple and unglamorous end for a man who had once controlled the biggest criminal empire in America.

Other than a brief six-month stint at Leavenworth in 1958, Alvin Karpis called Alcatraz home from August 1936 until April 1962. Karpis was born in 1907 in Montreal, Canada and was raised in Topeka, Kansas by his parents, immigrants from Lithuania. Karpis started his criminal career while still a young boy, associating with unsavory characters around Topeka. He was sent away for the first time for to a reformatory in Hutchinson, Kansas in 1926, but he quickly escaped. Karpis earned the nickname “Creepy” due to his devious smile.

Karpis went on the run, committing crimes wherever he could until he landed in Kansas City. He was arrested there for stealing a car and was sent back to the reformatory in Hutchinson, and then the state prison in Lansing, Kansas. It was behind bars in Lansing that Karpis met Fred Barker of the infamous Barker Gang. After Karpis was released from Lansing in 1931, he joined up with Fred Barker and his gang in Tulsa, Oklahoma and went on a crime spree that included bank robberies and murder, and fascinated the American public.

The FBI and other law enforcement agencies hunted Karpis and the Barkers throughout the U.S. Many of Karpis’ partners, including Fred Barker, were caught and gunned down. Karpis was eventually tracked and arrested in New Orleans on May 1, 1936 by FBI director J. Edgar Hoover himself.

Karpis received a life sentence for his various crimes and was sent to Alcatraz. “Creepy” ended up serving the longest sentence of any prisoner ever sent to The Rock. Karpis was transferred to McNeil Island Penitentiary in Washington, where he was behind bars until his parole in 1969. It was at McNeil Island that Karpis met and befriended a young criminal who would later become notoriously famous in his own right; Charles Manson. After Karpis was paroled, the American government immediately deported him to his native Canada. Karpis lived in Montreal until he relocated to Spain a few years later. “Creepy” died in Spain in 1979 at the age of 72.

Mickey Cohen had a promising career as a featherweight boxer in the 1930s before he embraced a life on the fringes of society and became the most notorious mobster on the west coast. Cohen was born in 1913 in Brooklyn, New York, but his family moved to Los Angeles when he was still a young boy. He discovered he had a knack for fighting and fought in illegal, underground fights in Los Angeles before he started boxing professionally in 1930.

For three years, Cohen trained and embarked on a career as a fighter. He moved to Cleveland, and it was there that he became friendly with various organized crime figures. In 1933, Cohen quit boxing. He moved to Chicago and became associated with Al Capone, working as an enforcer and eventually running a gambling business for him. Cohen had a falling out with a fellow gangster, and in 1939 it was arranged that he would move to Los Angeles to work for Benjamin “Bugsy” Siegel.

Cohen thrived as a mobster on the west coast, and, with Siegel, he helped turn Las Vegas into a gambling mecca. Like Al Capone, authorities worked for years trying to put Cohen behind bars. They eventually succeeded, and in 1951, the California-based gangster was sent to prison for tax evasion.

Cohen was paroled in 1955, but was sent away again for tax evasion in 1961. This time his destination was Alcatraz. Cohen is the only man to be bailed out of Alcatraz, but he was sent back to The Rock again in 1962 after his appeals failed. With Alcatraz due to close, Cohen was transferred to the federal prison in Atlanta. Cohen was paroled one last time in 1972. He died in Los Angeles in 1976.

The man known to the world as “Machine Gun Kelly” was born George Francis Barnes, Jr. in Memphis, Tennessee in 1895. Unlike many career criminals, Kelly was raised in an affluent household, and had many advantages as a youth. It was during the Prohibition era in the 1920s that Kelly began working as a bootlegger. He was arrested in Oklahoma in 1928 for smuggling alcohol onto an Indian Reservation and sentenced to three years in Leavenworth.

After he was paroled, Kelly married a woman named Kathryn Thorne, and she encouraged him to go full-fledged into a life of crime. Thorne bought Kelly a machine gun, and the two embarked on a bank robbery spree across the south.

The couple kidnapped a wealthy Oklahoma businessman named Charles Urschel, received a $200,000 ransom for him, but were arrested two months later. Kelly and Thorne were each sentenced to prison in 1933.

Machine Gun Kelly was sent to Alcatraz, where he spent 17 years. He was recognized as a model prisoner on The Rock, before he was transferred to Leavenworth. Kelly would never taste freedom again. On his 59th birthday in 1954, Kelly suffered a fatal heart attack and died. Kathryn Thorne remained in prison until her parole in 1958. After her release, Thorne lived in Oklahoma until her death at the age of 84 in 1985.

Robert Stroud, the “Birdman of Alcatraz,” is probably the most famous inmate in the prison’s history. Ironically, Stroud was not allowed to keep birds while he was at Alcatraz. He earned the “Birdman” nickname before he came to The Rock, during his prison term at Leavenworth. It was at the federal prison in Kansas that Stroud raised, sold, and studied birds.

Despite his moniker, Robert Stroud was not a gentle soul. He was a convicted killer who fellow inmates despised and feared. Stroud was born in Seattle in 1890. By the age of 18, the young man had made his way to Alaska and was working as a pimp in Juneau. In 1909, when he was still only 18-years-old, Stroud shot and killed a man who had beaten and refused to pay a prostitute who worked for him. Stroud was given a 12-year sentence and sent to prison in Washington.

Stroud quickly gained a reputation for being a violent and unpredictable prisoner, and he was transferred to Leavenworth in 1912. In 1916, Stroud attacked a prison guard and stabbed him through the heart with a handmade shiv. The murder of the guard initially earned Robert Stroud a death sentence. After a number of appeals and trials, Stroud’s death sentence was commuted to life in prison in 1920. It was around this time that Stroud began to study and care for birds. He eventually raised hundreds of birds, and even wrote two books on the subject.

In December 1942, Stroud was transferred to Alcatraz. Stroud spent most of his time on The Rock in isolation, and he studied law. After spending 17 years at Alcatraz, Stroud was transferred to a federal prison in Missouri due to his failing health. He died there in 1963. Incredibly, Robert Stroud spent the last 54 years of his life in prison, including 42 of those years spent in solitary confinement.