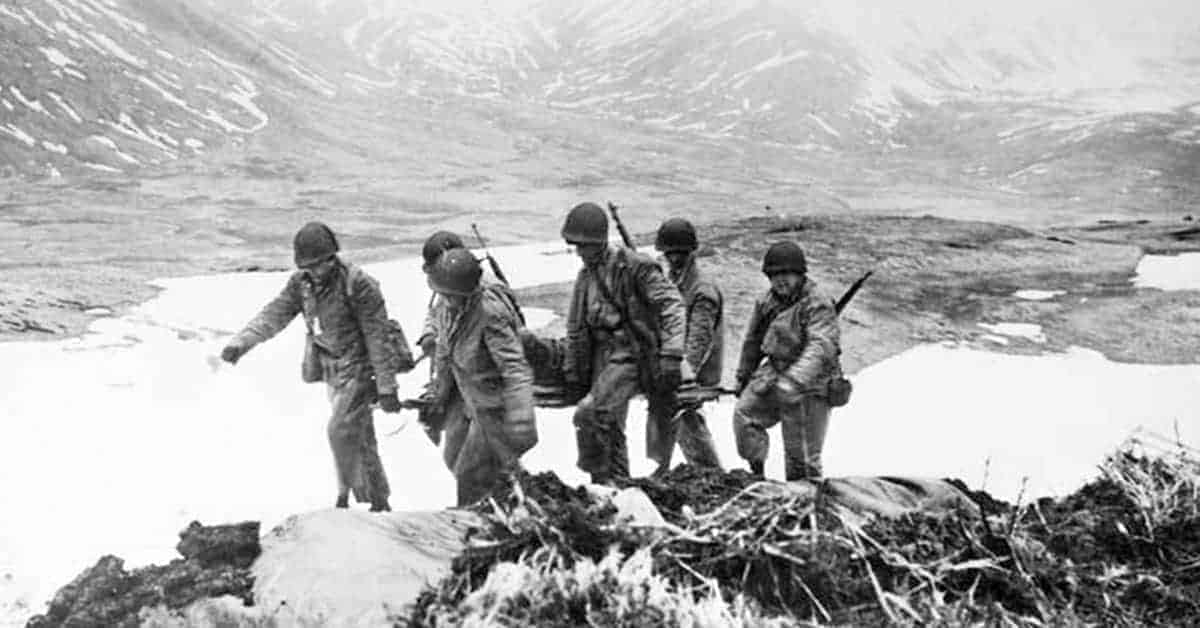 A small Japanese force had occupied the islands of Attu and Kiska. The islands’ strategic value was their ability to control Pacific transportation routes. The Japanese thought controlling the Aleutians would prevent a possible U.S. attack across the Northern Pacific. The U.S. feared that Japan would use the islands as a base from which to launch assaults against the West Coast.

The United States Naval Intelligence had broken the Japanese naval codes. Admiral Nimitz learned, by May 21, 2942, of Yamamoto’s plans to attack the Aleutians. By June 1, the United States had 45,000 soldiers stationed in Alaska, with 13,000 only 200 miles from Dutch Harbor naval facility. When the first signs of a possible attack were known, the Eleventh Air Force was ordered to send out reconnaissance airplanes to locate the Japanese fleet reportedly heading towards Dutch Harbor and attack it with bombers. On June 2, a naval patrol plane spotted the Japanese fleet, reporting its location as 800 miles southwest of Dutch Harbor. Bad weather set in and no further sightings were made.

Utilizing the bad weather, the Japanese raided Dutch Harbor on June 3, 1942. Only half the striking force reached its target. The rest got lost in the fog and crashed or returned to the carriers. The 17 Japanese planes that found the base was greeted by intense anti-aircraft fire and soon were confronted by the Eleventh Air Force fighters. The Japanese quickly released their bombs and retreated back to the carriers. They did little damage. On June 4, the Japanese were able to successfully bomb the Dutch Harbor oil storage tanks, hospital, and a beach barracks ship. The American pilots, who had found the Japanese fleet, could not sink them due to the bad weather.

The Japanese invaded Kiska on June 6 and Attu on June 7 with little resistance from the local Aleuts. Most of the native population had been evacuated by the US military before the invasion.

On July 5, the US submarine Growler attacked three Japanese destroyers off Kiska, sinking one and heavily damaging the other two, killing or wounding 200 Japanese sailors. By August 1942, the Americans had established an airbase on Adak Island and began bombing the Japanese on Kiska.

On May 11, American forces began their operation to recapture Attu. Despite many difficulties: a shortage of landing crafts, unsuitable beaches, vehicle operational failure in the tundra, and soldiers suffering from frostbite because the cold weather supplies could not be landed. A fierce battle ensued. 580 American soldiers were killed, 1,148 were wounded, and 1,200 incurring injuries from the cold. In addition, 614 soldiers died from disease, and 318 from Japanese booby traps and friendly fire.

On May 29, the remainder of the Japanese forces attacked near Massacre Bay. This was one of the largest Banzai attacks of the Pacific campaign. The Japanese penetrated deep into the US lines and after a fierce battle, the Japanese forces were virtually exterminated. 28 Japanese soldiers were taken, prisoner. American burial teams counted 2,351 Japanese dead, but it was thought that hundreds more had been buried by bombardment during the battle.

On August 15, 1941, an invasion force of 34,426 Canadian and American troops landed on Kiska. They found the island abandoned. The Japanese had left two weeks earlier, under the cover of fog. Despite US military command having access to the Japanese ciphers; the Army Air Force bombed the abandoned Japanese positions for two weeks. With the Japanese gone, the allies incurred 313 casualties on Kiska: all the result of friendly fire, booby traps, disease, and frostbite.

History Channel – How Codebreakers Helped Secure U.S. Victory in the Battle of Midway

The National WWII Museum – The Battle of the Komandorski Islands

Brendan Coyle – Kiska: The Japanese Occupation of an Alaska Island