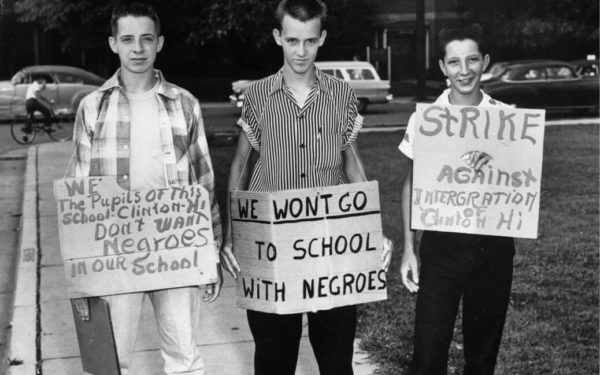 As the nineteenth century moved into the twentieth century, the movement of African Americans was strictly controlled. In the South, states had passed separate but equal laws. The Jim Crow laws, as they were called, had been upheld in the courts and clearly delineated the racial divide between black and white, even if they did not explicitly state who was white and who was black. The North and West were a different matter.

The Segregationist movement was in full swing during the first two decades of the twentieth century. President Woodrow Wilson screened the pro-Klan movie, Birth of a Nation, in the White House. African Americans protested the movie and led boycotts against the theaters that showed it. The 50th anniversary of the Civil War was approaching and both sides erected ornate memorials to their Confederate and Union dead. Eastern European immigrants continued to flood into northern cities while millions of whites and blacks migrated to the North to work in factories preparing arms, ammunition, and vehicles for war breaking out in Europe. In cities, African Americans and ethnic whites began fighting for the same jobs and turf.

As industrialization began to infiltrate cities, housing for workers became scarce. For cities like Chicago, Detroit, St. Louis, and Baltimore, immigrants fought southern migrants for dilapidated and over-used housing. When new tracts of homes were built, people that could move did so quickly. Residents of these new neighborhoods formed neighborhood improvement organizations. The ultimate goal of these organizations was to ensure that residents were of the same ethnicity.

Members of the improvement organizations would go house to house demanding that homeowners agree to place a racially restrictive covenant on their property. These covenants would state that the current homeowner has agreed to sell their home only to someone of their same race thus ensuring that an ethnically Italian or Polish working-class neighborhood would remain intact when homes sold. If a homeowner in an Italian-American neighborhood sold their property to an African American, for example, the neighborhood improvement organization would sue to have the new homeowner evicted from the property they had just purchased.

The practice of enforcing racially restrictive covenants fell to the local court system and the sheriff’s office. Neighborhood organizations would file a lawsuit stating that the new homeowner was in violation of a restrictive covenant registered with the city’s Register of Deeds office. The court would rule in favor of the neighborhood organization and then send the sheriff’s deputies to serve the eviction papers to the new homeowner. To prevent personal belongings from being thrown into the street, evicted homeowners would quickly pack up their belongings and find a new place to live. Any money that they paid for the purchase of the home was lost.

The Ville was a middle-class African-American neighborhood on the west side of St. Louis. Surrounding the Ville were two-family and four-family flats that housed both white and black workers. The oldest home on Labadie Avenue dated to 1896 and had always housed African American families. In 1945, JD Shelley and his wife, Mary, purchased the home at 4600 Labadie Avenue, which was built in 1906, using a straw party. As the Shelleys were black, it was difficult to purchase property. To circumvent this, white couples would purchase homes on behalf of black couples. When the sales were finalized, the white couples would have the deed transferred to the black couple. This practice began in earnest after the Second World War, when housing in industrialized cities was scarce.

The Shelleys’ neighbor at 4609 Labadie Avenue, Louis D. Kraemer, on behalf of the Marcus Avenue Improvement Association, filed a lawsuit claiming that the Shelleys were in violation of the racially restrictive covenant placed on the home in 1911. The covenant stated that no negro or anyone of the Mongolian race could occupy the home for fifty years. The St. Louis court sided with the Shelleys, and they were permitted to stay in their home. Upon appeal to the Missouri Supreme Court in 1947, the Kraemers were victorious. George L. Vaughn, the Shelley’s lawyer, appealed to the US Supreme Court.

Companion cases that also contested the legality of racially restrictive covenants joined the Shelley v. Kraemer case. McGhee v Sipes originated in Detroit, and Hurd v. Hodge and Urciolo v. Hodge originated from Washington, DC. Numerous entities, including the National Association for the Advancement of Colored People and the US Solicitor General, submitted an amicus curia, friend of the court, brief in the hopes of influencing the Court’s decision.

On May 3, 1948, the US Supreme Court announced their decision in favor of the defendants. As argued by the lawyers, the US Supreme Court stated that enforcing racially restrictive covenants violated the Equal Protection Clause of the Fourteenth Amendment. The Court did not state that racially restrictive covenants were illegal; they just stated that enforcing them through the courts could no longer happen. The Shelley v. Kraemer case was a major civil rights victory. It continued to set a precedent that the Fourteenth Amendment protected all citizens of the United States no matter their race.

Public education for all children was not realized until the twentieth century. School districts across the country routinely underfunded schools for African Americans. Jim Crow laws in the South and de facto understandings in the North meant that most school boards consisted of all white members or a majority of whites. Underfunding of separate but equal schools occurred throughout the nation. Not until the early 1950s did education change.

In 1951 and 1952, five lawsuits were filed. African American parents were tired of the inferior and underfunded education school boards were giving to their children. Numerous families joined lawsuits in South Carolina, Delaware, Kansas, Virginia, and Washington, DC. Four of the lawsuits claimed that the school boards were in violation of the Equal Protection Under the Law Clause of the Fourteenth Amendment. The remaining lawsuit argued that an inferior and underfunded education for blacks was in violation of the Due Process Clause of the Fifth Amendment.

Throughout the first half of the twentieth century, black students attended colored schools. Some of the schools had no heating, electricity, or indoor plumbing. Most colored schools did not have gymnasiums or cafeterias. According to one lawsuit, the school board refused to provide transportation for black students stating there was no money in their budget while that district used thirty buses to transport white students.

While school boards maintained that they were providing an equal education, albeit separate for both blacks and whites, an increase in national desegregation efforts was gaining results. Most importantly, President Harry Truman issued an executive order on July 26, 1948, that abolished racial segregation in the armed forces. The National Association for the Advancement of Colored People and its Legal Defense Fund searched for local cases that were challenging education.

The five cases that became know as Brown v Board of Education were Harry Briggs, et al. v. R.W. Elliot, chairman, et al from Clarendon, South Carolina; Davis v. County School Board of Prince Edward County from Farmville, Virginia; Gebhart v. Belton from Claymont, Delaware; Bolling v. Sharpe from the District of Columbia; and Brown v. Board of Education of Topeka from Kansas. All of the cases argued that because of ongoing underfunding of the black schools in each respective district, black students were not receiving the same education as white students.

The US Supreme Court heard the Brown case in December 1952. When no decision could be made to announce in the Spring of 1953 and with the death of Chief Justice Fred Vinson, the case was argued again on December 8, 1953. Chief Justice Earl Warren wanted a unanimous ruling to show that the nation had reached a consensus on legal segregation. President Dwight D. Eisenhower spoke to Chief Justice Warren stating that southerners did not want their girls to sit next to big black men in class, but that they were not bad people.

Finally, on Monday, May 17, 1954, the United States Supreme Court announced its decision. Chief Justice Warren read for the majority in the unanimous decision. Stating that the importance for public education in the Republic had evolved into a requirement for good citizenship, the support of segregating children solely based on their race could no longer exist. As such, the Court ruled that separate education for the races was not equal and no longer constitutional.

With the announcement of the decision, the burden of responsibility to ensure equal public education for white and black children fell to the states. Many states were tasked with amending parts of their constitutions that were now unenforceable and formulating plans to comply with the Court’s Brown decision. To state that the issue remained contentious would be a massive understatement. Throughout the South, North, and even West, public educators, board members, parents, and students viciously and sometimes violently attacked each other in attempts to prevent school desegregation.

In the end, it was the Court’s ruling in its 1896 Plessy v. Ferguson ruling that was overturned. No longer could separate but equal be the law of the land in public accommodations. The Warren court had decided that equal meant together, not separate. The last word was yet to come.