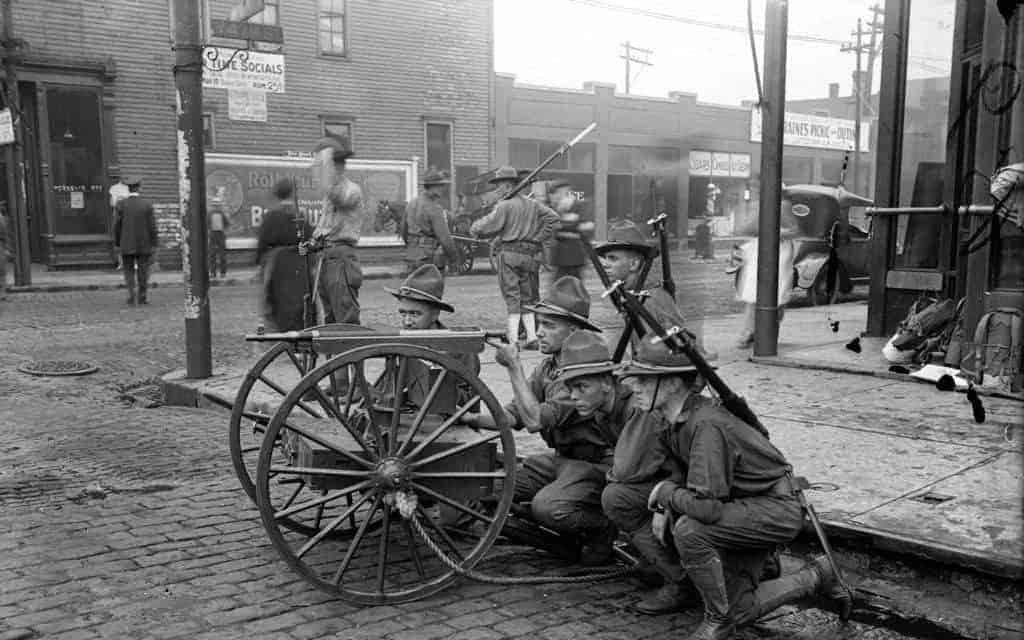 Americans riot. During America’s almost 250 year history, mob violence has been used to terrorize populations and to demand political change. Hand-to-hand combat, street fighting, setting buildings on fire, and pulling people from their homes have been modes of violence used in some of America’s most notorious riots.

Rioting in the nineteenth and early-twentieth century was rather commonplace. Yet, while the violence in the riots was the same, they still managed to shock observers. Below are five riots that shook America. Some resulted in no change, others prompted civilian action, and still others exposed a pattern of racial violence that remains virtually unchanged today.

Most of the battles of the American Civil War occurred in southern states. As the two warring armies entered the countryside and faced each other in battle, maintaining a farm was nearly impossible. Even for those that were able to farm a few acres, when the armies were nearby, they often took the crops, livestock, and foodstuff for their own consumption. This left those in the countryside on farms and small towns without food. Women and their families left the countryside for the city in hopes of finding war-related work and food.

As the war dragged on, those on the home front dealt with soaring inflation and high food prices. For long-time residents of the cities, they had to deal with the massive onslaught of the migrating refugees who had the clothes on their backs, a family bible, and little else. The little food available for poor city-dwellers suddenly had to be shared with poor refugees. There simply was not enough to go around; even being wealthy did not exclude a person from hunger.

Women protested in front of the Confederate Capitol in Richmond. They demanded that President Jefferson Davis supply them with the bread they so badly needed. Unwilling or unable to alleviate the food shortages, Davis provided no assistance. On April 2, 1863, roughly 5,000 women and their family members stormed into shops and warehouses, smashing windows and setting small fires, taking whatever they could. They took jewelry, clothes, food, and other items. The smash and grab of the Civil War left shops destroyed and businesses ruined. The Mayor of Richmond proclaimed martial law with the state’s militia sent to squash the violence.

Women took an active and violent role in demanding bread. While no one was killed during the protesting, the act of women rioting was a stark contrast to the ideals of nineteenth-century womanhood. The Richmond Bread Riots of 1863 illustrated that women were willing and able to demand that the government fulfill their responsibilities to their citizenry and ultimately changed the way that women participated in the Republic.

Memphis, Tennessee sits along the shores of the Mississippi. The hinterland of Memphis, prior to the Civil War, was filled with cotton fields and slave labor. When the Civil War ended and the Thirteenth Amendment signed forever outlawing slavery in the United States, Memphis became a mecca for freedmen and their families. As a river town, Memphis held the promise of jobs for the ever-increasing shipping traffic. Along the riverfront, freedmen and Irish laborers fought for the same jobs and dealt with discrimination.

In addition to the freedmen from the hinterland, Memphis had numerous mustered-out black Union soldiers also seeking labor opportunities. Memphis was a southern town that fell to Union forces in 1862. The sight of Union soldiers was not new in 1866. What was new was the sight of mustered out black Union soldiers. As residents of Memphis continued to adjust to peacetime they also had to adjust to the changes in social hierarchy. As long as slavery was legal, the Irish would never be at the bottom of the American social order. Once slavery was outlawed, freedmen and the Irish began battling for which group would be at the bottom of the ladder in a post-slavery country. Complicating this matter further was that the Memphis police force consisted mostly of Irish immigrants.

When black soldiers mustered out of the army and celebrated in the saloons and taverns of Memphis, the Irish police officers ensured that these freedmen knew where they stood in the social hierarchy. Tensions between the two groups intensified as Federal black soldiers patrolled the city to ensure the peace. On April 30, 1866, three black mustered-out soldiers and four Irish police officers had a violent encounter. As one officer shot a former soldier lines were drawn. The next day, on May 1, 1866, whites began pulling black people from their homes, burning houses, churches, schools, and businesses. White mobs raped several black women dozens of black residents were killed. The violence lasted for three days before martial law was declared to restore order to the city.

In the riot’s aftermath, 46 blacks and two whites were killed and hundreds of homes, schools, and churches were burned, and many blacks fled Memphis. Northerners were appalled at the violence, and support shifted from President Andrew Johnson’s Presidential Reconstruction plan toward the more militarized plan. The Radical Reconstruction Act carved the South into five military zones, Congress ratified the Fourteenth Amendment that defined who was an American citizen and that those citizens have a right to due process and equal protection under the law, and ultimately was the catalyst that led to the impeachment of President Andrew Johnson.