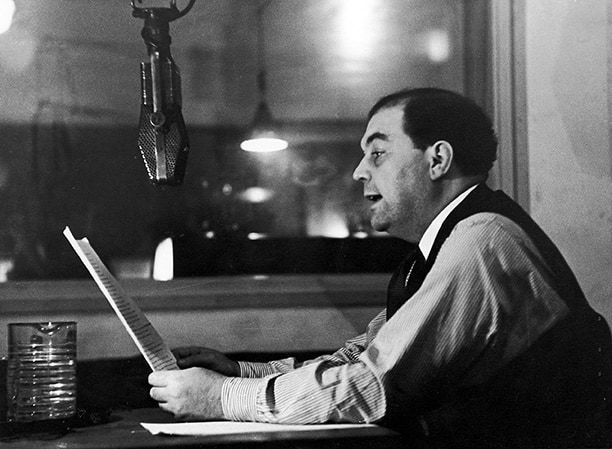 The use of the word propaganda first surfaced when Europe was engaged in one of its bloodiest conflicts. In 1622 during the Thirty Years War, the Catholic Church created an official group called, Congregatio de Propaganda Fide, or Congregation for Propagating Faith. Its purpose was to form missions that would venture into foreign regions and spread the Catholic religion.

The “Big Lie” propaganda technique surfaced after Adolf Hitler wrote about it in his autobiographical book Mein Kampf (my struggle). A succinct definition of Big Lie reads like present-day political strategy: make the lie big, make it simple, keep saying it, and eventually the people will believe it.

During the 1930s and 1940s the Big Lie paradigm began to fuse with, and become fueled by, new technologies. Radio, in particular, was a choice weapon of war. It was easily used to spread black propaganda over vast distances. ‘Black propaganda’ is utterly and completely baseless information that emerges from a “trusted” source, but is actually being produced to mislead.

The genesis of British black propaganda radio was the BBC German service announcer, Sefton Delmer. The fake news claims invented were aired through satiric broadcasts by radio host Peter Seckelmann, who was known on air as Der Chef. Seckelmann’s Der Chef character was a former Prussian soldier and a radical loyalist to the Nazi cause — so much so, that he would sometimes make claims that Hitler was too easy going.

In his first ever black propaganda show, Der Chef took on a recent event involving a prominent German politician. Rudolf Hess was on a mission in Scotland where he was given the task of trying to make a peace deal with the British when he was taken prisoner. Der Chef demeaned Hess’ mission by portraying it as an act of cowardice.

A majority of Der Chef’s victims were low-ranking Nazi officials whose character he berated with a number of insults that were topped off by comparing their pathetic, frail devotion to the Nazi cause to the extraordinarily devoted soldiers risking their lives in freezing temperatures waging war in Russians.

The station had a successful run from 1941 until 1943. The operation was a success and soon another black propaganda station took its place. The British were not hellbent on pursuing only the Germans. The airwaves gave them wings that enabled their fiction far and wide. They began offering black propaganda in other languages, including Italian. Most the programs were made and distributed from British soil.

Radio Deutschland had a measurable impact on the war. The station was so well received and Hitler’s notorious propaganda mastermind, Joseph Goebbels, brought it further into the fold of legitimacy by drawing attention to it through his recognition. By harnessing the medium wave band, they were able to broadcast far enough to be picked up by shortwave radios used by German U-boats. During WWII, Germany had amassed the largest submarine fleet the world had ever seen; it was in direct violation of the Treaty of Versailles. After the war, Hitler’s U-boats were noted for having served as the source of Prime Minister Winston Churchill’s biggest fear. The only thing that really frightened me during the war was the U-boat peril, he later wrote.

Soddatensender Calais was a British-run clandestine radio station used to convey manipulated information to German troops. During the Second World War, the Brits invented more than one German military broadcasting network solely for the purpose of spreading propaganda throughout enemy territory. The British acquired equipment after a law was passed in the U.S. that limited the power of transmitters making anything that worked over the 50kW limit useless in American. The transmitter was picked up by the British Secret Service, who utilized it as a weapon of war.

The objective of the lies was to counter the idea that the Germans were winning the war. Fake news included stories about German troops that had been captured by the French and sent to the Soviet Union, the common problem with foreign workers having sex with German soldier’s wives while their husbands were away fighting, and a growing tidal wave of anti-Nazi resistance that was growing with no end in sight.

Later, the British were able to focus less on technical issues and became masters of content. They made up numerous stories, including one that purported in France there were an “immense number of foreigners in Wehrmacht uniform. It is considered safer to employ them there rather than in the east, where they might be dangerous. All the scum is sent there – in Brittany there are even Russians in Wehrmacht uniform.”

VD in the Philippines and other WWII Leaflets

The origin of black propaganda was not always apparent, although one could deduce by listing their enemies. During WWII, the Philippines was blanketed by leaflets with a message that provoked anti-American sentiment because of (get ready for it) venereal disease.

Thousands of leaflets were released that claimed venereal disease was sharply on the rise amongst U.S. military officers. Filipino women with questionable character were to blame. The leaflet suggested abstaining from sex except with one’s wife, a virgin, or a woman of respectable character. The last paragraph of the leaflet concluded an increase in pro-American attitudes was causing countless numbers of Filipino woman to fling themselves whimsically at American servicemen, who were victims in the end because Filipino woman had no education about hygiene practices that would otherwise prevent them from becoming the rampant disease carrying tramps they are. The leaflet was signed at the bottom, “U.S. Army.”

Leaflets were likewise produced by the west and dropped into Japan. One simply read, “Japanese Soldier! Your position is now hopeless!” Others were like painful greeting cards: “You’re Doomed!” Some leaflets seemed to be culturally sensitive. For instance, one dropped in Italy asks, “Who has launched you into this war? Are you as slaves, to knuckle under to your hereditary enemy, Germany? Beware! Because war terror is now right at your door.” The British tried dropping informational leaflets to dissuade Italians from siding with Germany.

Appealing to their religious roots, the British wrote they “do not want to hit Italian churches and artistic monuments: for centuries English people have made pilgrimages to admire the masterpieces of the Italian artistic genius. Some churches, however, may be hit, by accident. Can as much be said for the German airmen? During the period from September 1st, 1940 to March 15th, 1941 the worst for intensity of bombing, no less than 714 churches were destroyed or badly damaged in England alone (thus excluding Scotland).”

The British argued that the Italians were co-consipritors in the ruination of their own country by refusing to denounce and abandon Germany. The British said, “as long as Italy continues to be one of our enemies we shall be compelled to bomb Italian industrial and military objectives. Are we not compelled, with the cooperation of French, Belgian, Dutch and Norwegian airmen, to attack enemy targets even in France, Belgium, Holland and Norway?”

The Far East had a propensity for creating their black propaganda during WWII. A document passed around Asia gave a detailed description outlining Japan’s quest for China.

The Tanaka Memorial was first published in Nanking, China. It reads a little like a haiku version of Karl Marx’s Communist Manifesto:

If we succeed in conquering China, the rest of the Asiatic countries and the South Sea countries will fear us and surrender to us.

Then the world will realize that Eastern Asia is ours.

An English version of the Tanaka Memorial made its way into mass circulation and thus inspired a group to erect a publication putting the document front and center in The Plain Truth. The manifesto reached a small number of people through Communist International just three years earlier, in 1931. The western world saw it as a Mein Kampf-inspired composition, and film director Frank Capra used his film, Why We Fight, to speculate the document was a Japanese blueprint for invading the United States.

Many during 1930s and 1940s saw parallels between the document and Japan’s actions, making it seem plausible that The Tanaka Memorial was not black propaganda. On the contrary, it was chillingly authentic. In 1940, Leon Trotsky wrote and published an article describing how the document came to be discovered first by Soviet intelligence agencies; a highly positioned spy in Tokyo obtained it and leaked it to China as to not risk compromising his or her identity.

The document’s origins remain shrouded in mystery. Is the Tanaka Memorial real or fake? Many argue that Japan is too much of a fact-based a society to have created something altogether false. Other schools of through speculate that the Memorial is a forgery, created to offset Japan’s intention that was reached through a 1927 conference where Japan pledged to support the Chinese government in order to weaken Chinese communists. Some schools of thought point out that the document never surfaced in the Japanese language, but only in Chinese, which makes people believe that the document originated in China.

In August 1939, World War II had not broken out, yet. A black propaganda operation was carried out by Nazi forces meant to provoke justification for a German invasion of Poland.

The Gleiwitz Incident involved German troops pretending to be Polish citizens. Their intent was to stage an event that would justify a German military counter attack. The idea behind Gleiwitz was described at the post-war Nuremberg Trials. An SS officer testified he was given orders by two men (one of whom was Heinrich Müller, the chief of the Gestapo) to organize a small group of Nazi soldiers clad in Polish uniforms in order to storm the Gleiwitz station from where they would broadcast a Polish language, anti-German messages over the airwaves.

The incident quickly resorted to grisly acts against innocent civilians in order to solidify its authenticity. People who had no children, nearby family or friends were targeted, especially if it was suspected they were potential Polish sympathizers, such as Franciszek Honiok. Arrested the day before the Gleiwitz incident, Honiok was given a lethal injection and dressed to look like his intent was to carry out the crime he was being framed for. His body was filled with bullets and left to decorate radio station with false evidence.

Nazi concentration camps already dotted the landscape throughout Germany. Prisoners were transported from Germany to Poland to further lend authenticity to the Gleiwitz Incident. Before their arrival (and sometimes after) they were drugged, redressed, shot full of bullets, and their faces were annihilated until they were unrecognizable. The SS referred to the bodies as “konserve” (Canned Goods). To increase the believability of the scenario, some of the prisoners were forced to wear the Polish uniforms and attack the radio station, where they were subsequently killed.

The Gleiwitz incident was one of many operations the Germans were running along the Polish border at the same time in the build up to invasion. The overarching name was known as Operation Himmler. The SS staged everything from pillaged homes to propaganda centers. All of it was to provide Hitler with justified reasons for seeking retaliation and waging war. When Germany invaded Poland on September 1, 1939, Hitler noted that the crimes happening along the border were organized acts of aggression meant to cleanse Poland of ethnic Germans living on Polish territory.