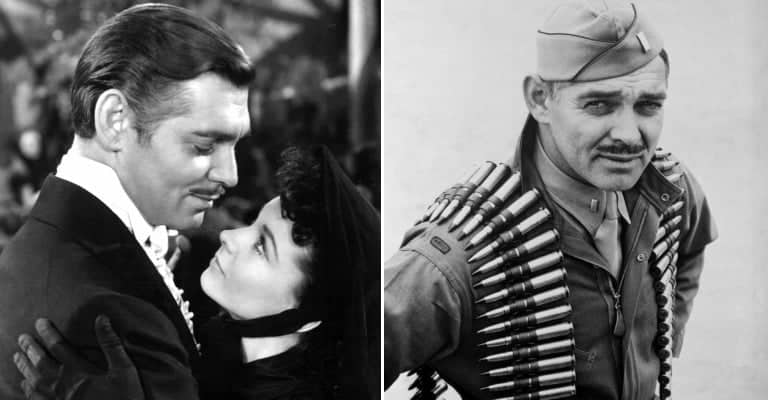 18. David Niven was a Sandhurst graduate

David Niven was a popular character actor, who won a Best Actor Oscar for his role in the 1958 movie Separate Tables. He also won acclaim for his roles as Phileas Fogg in Around the World in Eighty Days, as The Phantom in the Pink Panther, and as a squadron leader in A Matter of Life and Death. Born into Britain’s upper class, Niven’s antics in school got him expelled at age 10. That doomed his chances for getting into Eton, the elite private school his parents had hoped to send him to. So they sent him to the era’s dumping ground for unpromising scions of Britain’s elite, the Royal Military College, Sandhurst, from which he graduated in 1930.

17. Niven quit the military to try his hand at acting

David Niven resigned his commission after two years years in the military, and left for Hollywood. He got a series of bit parts during the 1930s, but just when he seemed to be on the verge of breaking out, WWII broke out first. Returning home, Niven rejoined the British army as a lieutenant in a motor training battalion. Craving more excitement, he transferred to the Commandos, and was assigned to the GHQ Liaison Regiment – a special reconnaissance unit known as the Phantom Signals Unit. However, to take advantage of his acting experience, the authorities temporarily detached Niven to the Army Film Unit, where he acted in two war movies.

16. Niven served with the British Commandos

In 1944, Niven served in Normandy to locate and report German positions, and liaise with commanders in the rear to apprise them of frontline conditions. Notwithstanding his reputation as a great storyteller and exceptional raconteur, Niven remained tight-lipped about his wartime experiences until his dying day, and was contemptuous of those who glorified their service. As he once put it: “I was asked by some American friends to search out the grave of their son near Bastogne. I found it where they told me I would, but it was among 27,000 others, and I told myself that here, Niven, were 27,000 reasons why you should keep your mouth shut after the war.”

15. Comedian Lenny Bruce fought in the US Navy in WWII

Lenny Bruce (1925 -1966) popularized edgy comic routines that combined satire, politics, religion, sex, and vulgarity. Growing up, he saw little of his father, but was strongly influenced by his mother, a stage performer. He eventually became a poster boy for freedom of speech after prosecutors persecuted him with obscenity charges, of which he was convicted in 1964. But before his meteoric comic career, Lenny Bruce had served his country in WWII.

14. Lenny Bruce Lied about his age to enlist

Bruce’s wartime service began in early 1942, when 16 year old Lenny lied about his age to join the US Navy. He was assigned to the light cruiser USS Brooklyn, and saw combat in the Atlantic and the Mediterranean while providing convoy escort. The Brooklyn also provided fire support for amphibious landings, including the Torch landings in North Africa, the invasion of Sicily, the Anzio landing, and Operation Dragoon, the Allied landings in southern France.

As the war drew to a close, Lenny grew bored with the Navy. A slapstick performance in which he dressed in drag upset his officers, and that gave him an idea: he checked into the Brooklyn’s sick bay to report that he was feeling gay. He described having been normal when he joined the Navy, but his shipmates gave him “abnormal attention”, including feeling his body and kissing him. As a result, he became attracted to some of his comrades. The medical officer reported to the captain that 19 year old Lenny was suppressing homosexual tendencies, but the desire and temptation kept getting stronger. The Navy sent him for a psychiatric evaluation because he had “a tremendous amount of homosexual drive“.

Naval shrinks noted that Lenny Bruce was the kind of homosexual who could adjust to heterosexual relations, and concluded that if he remained aboard a ship filled with men, he would “eventually give way to the performance of homosexual acts“. The Brooklyn’s captain concurred, and wrote that Lenny might give in at any moment to an explosion of homosexuality, that was “potentially dangerous socially” to his ship. He urged prompt action, before Bruce engaged in “scandalous action [causing] discredit to the ship in particular and to the naval service in general“. Bruce got his discharge. His ruse became the inspiration for Corporal Klinger, the cross-dressing M*A*S*H character desperate to get kicked out of the Army for being gay.

Clark Gable, once known as “The King of Hollywood”, quit school at age 16 to work in a tire factory, then tired of that and decided to become an actor after seeing a play. He starred in over 60 movies, and is perhaps best known for his role as Rhett Butler in the blockbuster Gone With the Wind. He also he won a Best Actor Oscar for his lead in It Happened One Night. When America entered WWII, Gable was Hollywood’s biggest star, as well as it biggest box office draw. That didn’t stop him from taking a break from acting, to fight the Axis.

10. Gable’s decision to enlist and go to war was as romantic as anything from a movie

Clark Gable was MGM’s biggest earner when America joined WWII. Following his wife’s death in an air crash while returning from a war bonds tour, a devastated Gable decided to enlist. Despite MGM’s reluctance to let its most lucrative star go, he joined the Army Air Forces in 1942, with the hope of becoming an aerial gunner. He was sent instead to Officer Candidate School, and was commissioned a 2nd lieutenant. On personal orders from the Air Forces’ chief, general Hap Arnold, Gable was sent to the Eighth Air Force in England and tasked with making a combat recruitment film for aerial gunners.

9. Gable duked it out with the Luftwaffe in B-17s over Germany

To obtain footage for his recruitment film, Clark Gable flew five combat missions as a B-17 gunner in 1943, including a bombing raid into Germany. His presence in the missions was for propaganda and PR purposes, but the dangers were all too real: during one mission, his B-17 lost an engine and had its stabilizer damaged after it was hit by antiaircraft fire and was attacked by fighters. Over Germany, two of his B-17’s crew were wounded, another was killed after being struck by flak, and shrapnel went through Gable’s boot and almost took off his head.

8. Gable’s studio went behind his back to yank him out of combat

Gable’s brushes with death alarmed the folk at MGM, who had no wish to lose their most valuable actor. So the studio worked its connections to have Gable reassigned to noncombat duty. The star actor was awarded a Distinguished Flying Cross and an Air Medal, and in late 1943, he was ordered back to the US to edit the film. Gable hoped for another combat assignment, but none came, and by the summer of 1944, he finally gave up and requested to be relieved from active duty. He stayed in the Air Forces reserves until 1947, when he finally resigned his commission.

7. The world’s most famous mime was also a French Resistance hero

Marcel Marceau was the world’s most famous mime. Before becoming world famous, however, Marceau spent most of WWII in hiding, and working for the French Resistance. His father, a Jewish butcher, had fled from the Nazi invasion in 1940, but was captured, and died in Auschwitz. Marcel moved to Paris with a new name and forged identity papers, and adopting the surname “Marceau” after a French Revolutionary War general, joined the Resistance.

6. Miming came in handy for Marcel Marceau in WWII

Marcel Marceau’s underground activities included rescuing Jewish children from German clutches, and smuggling them to safety. His talent for miming – a career to which he had aspired ever since he first saw a Charlie Chaplain movie at age five – came in handy to distract and quiet the children as he smuggled them past German guards to safety in Switzerland. After the Allies landed in France, he gave his first major performance before an audience of 3000 troops in recently-liberated Paris. He then joined the Free French army for the remainder of the war. His talent for languages and near fluency in English and German led to his appointment as a liaison officer with Patton’s Third US Army.

Johnny Carson, host of The Tonight Show from 1962 to 1992, had a talent for reeling them in since early childhood. At age 12, bought a mail-order magician’s kit, and started doing tricks to entertain family and friends. His favorite were card tricks, and he took to following people around with a deck of cards, while pestering them to “pick a card. Any card” – which became a signature expression on TV. For decades, he was one of the best known American. Less known about him is that he was a also a WWII US Navy veteran.

4. Johnny Carson joined the Navy when he was 17

Johnny Carson joined the US Navy in 1943, aged 17. He wanted to become a pilot, but the Navy had other ideas. After completing the Navy College Training Program, he was commissioned an ensign in 1945, and then sent to the Pacific Theater, where he was assigned to the battleship USS Pennsylvania as a communications officer. Carson also took up amateur boxing while in the Navy, and ran up a 10-0 record, with most of the matches taking place aboard the Pennsylvania.

3. Johnny Carson joined the war just in time to scrape up dead bodies from his ship

Johnny Carson was en route to the combat zone in August of 1945 when the war ended. He saw no combat, but did its aftermath: the Pennsylvania had been torpedoed two days before he joined the ship. The damaged vessel sailed to Guam for repairs, and as the newest and most junior officer, Carson was tasked with the removal of 20 dead sailors. Reminiscing about his naval experience, Carson thought that the highlight of his naval career was performing a card trick for James Forrestal, the notoriously cantankerous Secretary of the Navy. Forrestal was amused, and the realization that he could entertain somebody so crabby was a major boost to Carson’s self confidence.

Josephine Baker, AKA the “Creole Goddess”, “Black Pearl”, and “Bronze Venus”, was recruited by French military intelligence when WWII began. In the 1930s, she had voiced support for Mussolini’s invasion of Ethiopia, so when the Axis overran Franc in 1940, they assumed she was sympathetic to their cause. They were mistaken. Taking advantage of the occupiers’ trust, Baker exploited her fame to charm Axis officials at social gatherings to collect information. As an international entertainer, she had an excuse to travel, and she did, smuggling coded messages, written in invisible ink on her music sheets, between the French Resistance and the Allies.

1. Josephine Baker earned a military funeral for her WWII exploits

Josephine Baker also hid fugitives in her home, supplying them with fake IDs and visas. Later in the war, she joined the French Women’s Auxiliary Air Force, in which she was commissioned as a lieutenant, and also performed for Allied troops. In recognition of her wartime exploits and contributions to France, she was named a Chevalier of the Legion d’honeur by Charles de Gaulle, and was awarded the Croix de Guerre and the Medal of Resistance with Rosette. Upon her death in 1975, Baker became the first American woman buried with military honors in France, including a gun salute.

Bronx Pinstripes – On This Day in History: Yogi Berra Takes Part in D-Day

Ranker – The Most Beloved US Veterans

Smithsonian Magazine, March 22nd, 2017 – The Mime Who Saved Kids From the Holocaust