40 Facts About the Real Robin Hood 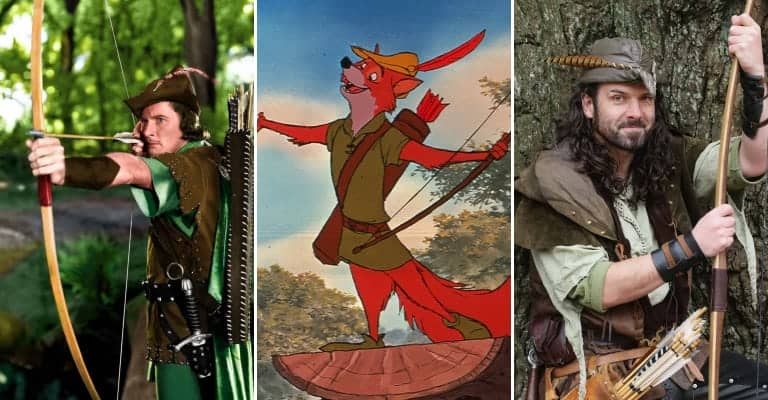 40 Facts About the Real Robin Hood

10. There Have Been Multiple Robin Hoods

With dozens or more figures identified as potential Robin Hoods, coupled with the possibilities that it was just a nickname or a general term for a particular breed of a bandit, there is no way to know where the stories originated. There may have been multiple Robin Hoods, whose stories merged to form the legends that we recognize today. An earlier one may have represented the former legends, while later ones became the stuff of the following stories.

9. The Sheriff of Nottingham Was Probably Based on a Real Person

Even if there was no noble outlaw named Robin Hood, there were sheriffs and other officials who were given authority by the king to exact taxes and oppress the people without any fear of punishment. The legends do not provide the name of the Sheriff of Nottingham that Robin Hood fought against, but there was almost certainly a sheriff of Nottingham who was cruel and overbearing.

7. Robin Hood Probably Waylaid Travelers and Stole From Them

Any historical Robin Hood was probably more of a bandit than a celebrated hero (at least until legends repainted him as a man of the people who took from the rich and gave to the poor). Bandits were notorious for attacking unsuspecting travelers, sometimes engaging them in a swordfight, which could easily prove deadly, and almost always stealing whatever they had.

6. Hood Probably Kept the Booty For Himself

A historical Robin Hood probably didn’t take the booty he stole and gave it to the poor. He probably kept it for himself, making him feared and dreaded among the local people while simultaneously becoming a subject of fascination. In fact, the people may have become so terrified of this bandit that they resorted to calling him Robin Hood, even if it wasn’t really his name.

5. His Heroism Was in His Resistance to the Sheriff of Nottingham

So if Robin Hood probably didn’t steal from the rich to give to the poor, why did he become so popular, especially among the peasants and lower strata of Medieval society? Probably because of his resistance to the Sheriff of Nottingham. Everyone hated him, and anyone who was willing to face him would have indeed become a hero to anyone living under his oppression.

If there were a real Robin Hood, he probably would not have been an even-tempered knightly figure. Instead, he probably would have been someone who went around looking for trouble and always trying to start a fight. He probably fought as many innocent people as “bad guys.” Their level of personal virtue wouldn’t have mattered if they were crossing his turf. In other words, he was like a Medieval gang member.

3. The Quest for the Historical Robin Hood is About a Larger-Than-Life Hero

For some, trying to find the historical Robin Hood is about identifying a particular person about whom the earliest legends tell stories. However, the bigger picture of looking for the real Robin Hood is about understanding the drudgery of Medieval life at the bottom of the hierarchical ladder, for people who were poor and oppressed by heavy taxation, and who needed a hero.

Along with the likes of King Arthur and the wizard Merlin, Robin Hood continues to be celebrated in England today. His celebrity is particularly prominent in Nottingham, which has a festival in his honor every year. In Sherwood Forest, the oak where he is believed to have called his Merry Men is protected as a historical site. There are even markers for his and Little John’s supposed graves.

1. The Legends Will Probably Remain Popular For Centuries to Come

Hollywood has taken the legends of Robin Hood and outfitted them for a contemporary audience. In all likelihood, the stories will continue to entertain children and adults for the foreseeable future. They may keep growing and evolving, so much so that 200 years from now, the stories scarcely recognize those that we know today.