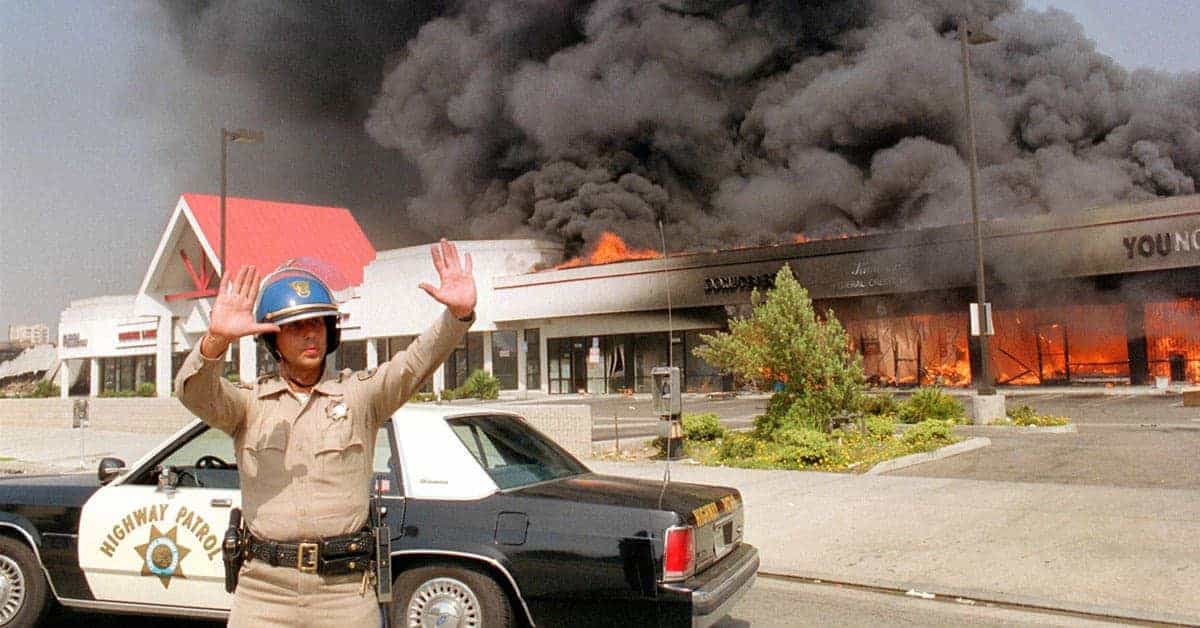 The Los Angeles riots were a series of lootings, arsons, and civil disturbances, that occurred in April and May 1992. The troubles began in South Central Los Angeles on April 29 after a trial jury acquitted four officers of the Los Angeles Police Department of using excessive force in the arrest and beating of Rodney King. The riots were a result of the African American community’s outrage over the verdict.

Rodney King, early in the morning of March 3, 1991, was driving on the Foothill Freeway with some friends after having watched a basketball game and drinking. At 12:30 a.m. the California Highway Patrol noticed King’s car speeding. The officers pursued, and King attempted to evade. King admitted he attempted to outrun the police at dangerously high speeds because a charge of driving under the influence would violate his parole for his previous robbery conviction. King exited the freeway near the Hansen Dam Recreation Center, traveling up to 80 mph through residential streets. Eventually, the police had forced King to pull over.

The passengers claim that they were “manhandled, kicked, stomped, taunted, and threatened.” When King came out of the car, he reportedly grabbed his buttock which California Highway Patrol officer Melanie Singer thought was King drawing his weapon. She drew hers. Ranking officer LAPD Sergeant Stacey Koon ordered the four present LAPD officers to â€˜swarm’ to subdue and handcuff King. King resisted by attempting to remove the officers on his back. King was tasered twice, kicked six times, and beaten 33 times with batons. King suffered a fractured facial bone, a broken right ankle, and multiple bruises and lacerations. This was all caught on film.

During the riots, on May 1, 1992, King made a television appearance in which he said, “I just want to say – you know – can we all get along? Can we, can we get along? Can we stop making it horrible for the older people and the kids? And… I mean we’ve got enough smog in Los Angeles let alone to deal with setting these fires and things… it’s just not right – it’s not right. And it’s not going to change anything. We’ll get our justice; they’ve won the battle, but they haven’t won the war. We’ll get our day in court and that’s all we want. And, just, uh, I love – I’m neutral, I love every – I love people of color. I’m not like they’re making me out to be. We’ve got to quit – we’ve got to quit; I mean after all, I could understand the first – upset for the first two hours after the verdict, but to go on, to keep going on like this and to see the security guard shot on the ground – it’s just not right; it’s just not right, because those people will never go home to their families again. And uh, I mean please, we can, we can get along here. We all can get along – we just gotta, we gotta. I mean, we’re all stuck here for a while, let’s, you know let’s try to work it out, let’s try to beat it, you know, let’s try to work it out.”

The riots lasted six days and resulted in 53 deaths, 2,383 injuries, more than 7,000 fires, damage to 3,100 businesses, and nearly $1 billion in financial losses. It could only be ended when the California National Guard was sent to LA to re-establish order.

Daily News – 25 Years After LA Riots, The Last Of 53 Victims Is Identified