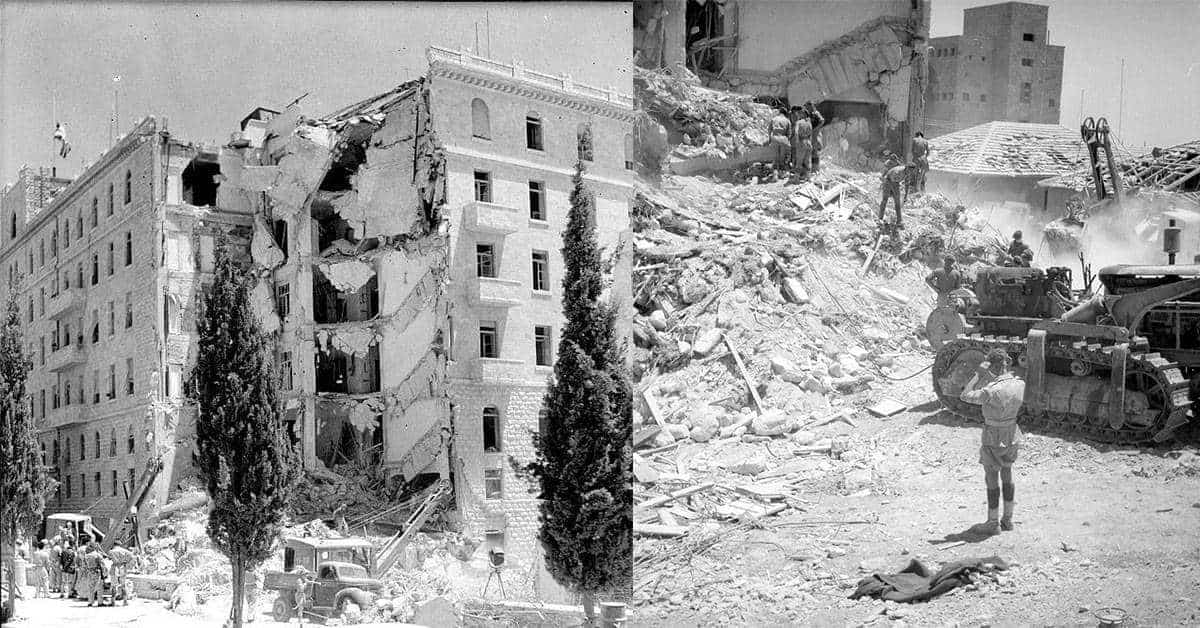 The King David Hotel bombing was an extremist Zionist attack carried out on July 22, 1946, carried out by the Irgun on the British administrative headquarters for Palestine. The hotel was the site of the central offices of the British Mandatory authorities of Palestine. The Irgun and sent warnings by telephone which, because bomb hoaxes were common, were ignored by the hotel staff.

Mandatory Palestine was a geopolitical entity under British administration, carved out of Ottoman Southern Syria after World War 1. The British civil administration in Palestine operated from 1920 until 1948. During World War I, the British drove the Turks out of the region during the Sinai and Palestine Campaign. In the McMahon-Hussein Correspondence, the English stated they would recognize Arab independence but then proceeded to divide the area with the support of France under the Sykes-Picot Agreement. The British complicated the issue with the Balfour Declaration of 1917, promising support for a Jewish state in Palestine. In 1922 the League of Nations legitimized the British occupation of the territory, “until such time as they were able to stand alone.”

The Irgun committed the attack in response to Operation Agatha, a police and military operation conducted by the British authorities in Mandatory Palestine. Soldiers and police searched for arms and made arrests in Jerusalem, Tel Aviv, Haifa, as well as several other settlements. Roughly 2,700 people were arrested in the raids, including the future Israeli Prime Minister Moshe Sharett. The officially stated purpose of the operation was to end “the state of anarchy” then existing in Palestine. The raids were purported to sabotage the alliance between the Jewish paramilitary the Haganah, and the extremist Lehi Stern Gang and the Irgun, to limit the military power, boost British military morale and prevent any sort of coup d’ètat.

The explosion occurred at 12:37 in the afternoon. It caused the collapse of the western half of the southern wing of the hotel. The rescue operation lasted for the next three days and over 2,000 truckloads of rubble were removed. Rescuers managed to only rescue six survivors. 91 people were killed and 46 people were injured.