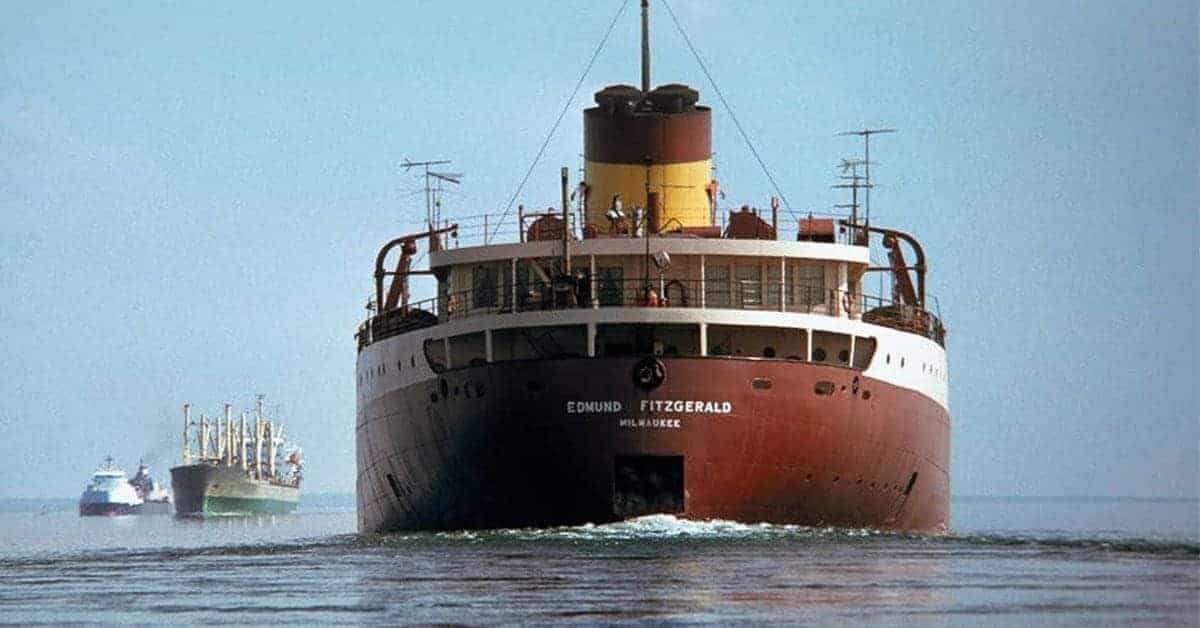 The SS Edmund Fitzgerald was an American Great Lakes freighter that sank, during a storm, in Lake Superior on November 10, 1975. When launched on June 7, 1958, she was the largest ship on the Great Lakes.

The SS Fitzgerald carried taconite iron ore from the mines near Duluth, Minnesota to the ironworks in Detroit, Toledo, and to other ports as well.

On November 9, with Captain Ernest M. McSorley was in command, and fully loaded with iron ore, she embarked from Superior, Wisconsin towards a steel mill near Detroit. The next day the SS Edmund Fitzgerald was caught in a tempest. The storm boasted hurricane-force winds and waves up to 35 feet high. Shortly after 7:10 P.M, the ship sank to the bottom of Lake Superior 530 feet deep. She was only 17 miles from Whitefish Bay.

Her crew of 29 sailors did not survive. No bodies were recovered.

From May 20-28, 1976, the U.S. Navy dove the wreck using the unmanned submersible, CURV-III. They found the Edmund Fitzgerald lying in two large pieces. In 1980, Jean-Michael Cousteau (son of Jacques Cousteau), sent two divers from their ship, the RV Calypso, in the first manned submersible dive.

In 1989, the Michigan Sea Grant Program organized a three-day dive to survey the Fitzgerald. The primary objective was to record a 3D videotape for use in museums, educational programs, and promotional videos.

On July 4th, 1995, a dive team recovered the SS Edmund Fitzgerald’s bell after 20 years of being at the bottom of Lake Superior.

Michigan Sea Grant – The Storm That Sunk the Edmund Fitzgerald

The Washington Post – How the Edmund Fitzgerald Went Down, Down, Down

Cult of Weird – Edmund Fitzgerald Bodies: The Shipwreck That Never Gave Up Its Dead

University of Wisconsin-Madison – The sinking of the SS Edmund Fitzgerald – November 10, 1975

History Collection – Shipwrecked: 7 Losses at Sea that Changed the Course of History