21 Images Depicting the Sultana Disaster of 1865 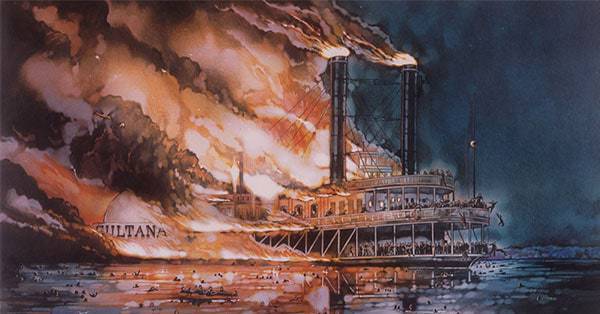 21 Images Depicting the Sultana Disaster of 1865

In late April, 1865, the Civil War was coming to an end. Union and Confederates decided that the POWs should be released. Prisoners Cahaba, Andersonville, and Libby Prisons were sent to the Vickersburg, Mississippi to take steamboats up the river into the North and home to their families.

The steamboat companies competed amongst each other to take the most freed prisoners up river. Each company was paid $5 ($90) per enlisted men and $10 ($180) per officer transported. The Sultana was one of the steamboats carrying soldiers up river. She was designed to carry about 375 passengers and crew members.

The Sultana traveled up river for two days, fighting one of the worst spring floods in the Mississippi’s history. In some places the river was three miles wide.

Around 2:00 a.m. on April 27, 1865, just seven miles north of Memphis, The Sultana’s boilers exploded destroying major sections of the boat, and igniting a large fire. The weak freed prisoners who survived the explosion were forced to attempt to swim through the cold, fast moving waters.

Approximately 1,700 people died. The Sultana disaster was the worst maritime disaster in American history, causing more deaths than the sinking of the Titanic.