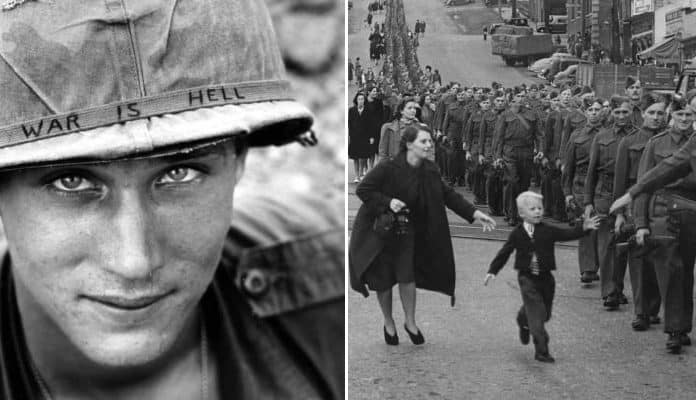 The sixteen photos which feature in this list may vary in their content and the emotional response that they elicit, but they all have one thing in common – they are as remarkable as they are captivating.  They cover themes of war and politics, love and hate, peace and violence as well as life and death. These photos achieved both national and international fame and acclaim. Prepare to be amazed by theses award-winning photographs.

1. “The Kiss” taken directly after Japan’s surrender is one of the world’s most recognized photos… But these days there is a different message.

One of the most famous images of the 20th century captures a jubilant scene following Japan’s surrender which brought an end to the Second World War. A sailor, George Mendonsa, grabs a nurse, Greta Zimmer Friedman, and passionately kisses her. The image is captured by Life magazine photographer Alfred Eisenstaedt and later features in the magazine. However, all is not quite what it seems at first glance. It turns out that Zimmer Friedman was a complete stranger to Mendonsa and that in the euphoria of the moment he had grabbed her and planted that famous kiss on her lips.
Mendonsa had served in the Second World War and at the time was at home on leave. He was due to report back for duty later that day. Beforehand Mendonsa went on a date with his future wife, Rita Perry. They went to Radio City Music Hall to watch a matinee movie when about halfway through, the lights came on and they were informed that the war was over, that the Japanese had surrendered. They went into a nearby bar to celebrate. Reflecting on the occasion, Mendonsa said that he was “popping the booze and everyone was half bombed.”
They move on to Times Square where Mendonsa spots a group of nurses and he has a flashback to the aftermath of a kamikaze attack on an aircraft carrier, the USS Bunker Hill, and how the nurses treated and cared for the wounded following the attack. With that memory fresh in his mind and admittedly a little intoxicated by alcohol and the euphoria of the moment he grabbed Zimmer Friedman and kissed her. Eisenstaedt just happened to be in the right place at the right time to capture the iconic image. Eisenstaedt admitted later that had Mendonsa being wearing a white uniform and Zimmer Friedman wearing black then he would never have taken the photo.
More recent commentary on the image and applying today’s standards of social behaviour has led some to suggest that the image should not be glorified as it captures what could be considered a sexual assault. However, Zimmer Friedman and Mendonsa later became friends and despite the inappropriateness of his actions, Zimmer Friedman acknowledged it in the context of time and the elation felt at the end of the war.