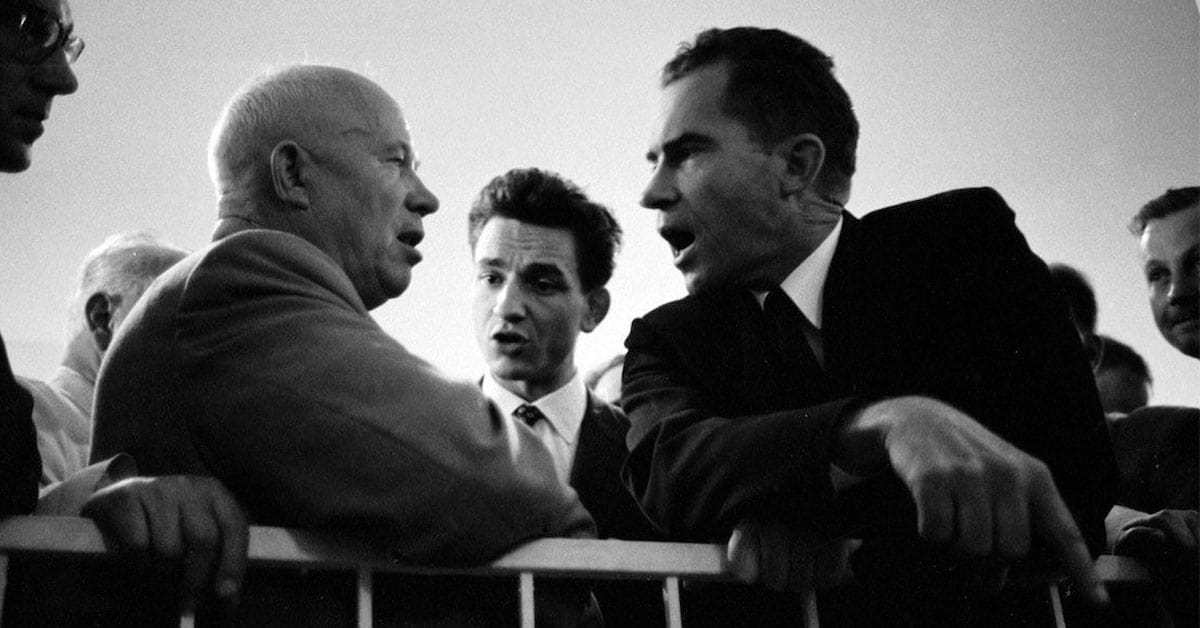 The Kitchen Debate was a series of impromptu exchanges (through interpreters) between then U.S. Vice President Richard Nixon and Soviet Premier Nikita Khrushchev at the opening of the American National Exhibit at Sokolniki Park in Moscow on July 24, 1959. The Soviets and Americans agreed to hold exhibits in each other’s countries as a cultural exchange to promote understanding as a result of the 1958 U.S.-Soviet Cultural Agreement. Nixon led Khrushchev on a tour of the exhibit demonstrating consumer goods from over 450 American companies.

The two leaders discussed the strengths of each country and economic policy. The majority of the discussion was over the technological prowess of each nation in the fields of household appliances. This measure of superiority was novel in that it was not a comparison of nuclear weapons, political influence, or control of territories.

Nixon’s expounds the beauty of capitalism is “Diversity, the right to choose, the fact that we have 1,000 builders building 1,000 different houses is the most important thing. We don’t have one decision made at the top by one government official. This is the difference.”

Khrushchev’s retorts that in seven years, the Soviet Union will be at the technological “level of America, and after that we’ll go farther. As we pass you by, we’ll wave “hi” to you, and then if you want, we’ll stop and say, â€˜please come along behind us.’ …If you want to live under capitalism, go ahead, that’s your question, an internal matter, it doesn’t concern us. We can feel sorry for you.”

Nixon’s visit to Moscow and his Kitchen Debate raised Nixon’s profile as a public statesman and helped improve his chances of receiving the Republican presidential nomination the following year.