20 Images of Corporal Wojtek, the Polish Bear and Hero of WWII. 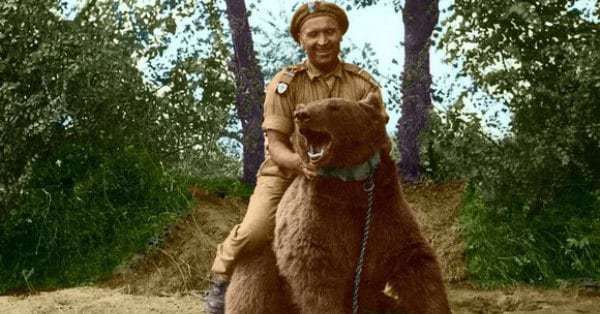 20 Images of Corporal Wojtek, the Polish Bear and Hero of WWII.

Corporal Wojtek Perski was a Syrian Brown Bear and a hero of World War II. In 1942, Wojtek was purchased by the 22 Transport Company, Artillery Division, II Corp of the Polish Army in Iran. As a small cub, the soldiers fed Wojtek condensed milk from a bottle. As Wojtek grew up, he developed a taste for beer, wine, and cigarettes.

Wojtek had his first brush with valor, while still in Iran, when he captured a thief who had broken into an ammunitions compound where he was sleeping. The ensuing commotion allowed the human soldiers to come and arrest the thief.

As the 22 Transport Company prepared to enter the war zone in Italy in 1943, the soldiers and Wojtek encountered a logistical problem. Animals were not allowed to accompany the army during conflict. To resolve this issue, the Company gave Wojtek a salary in the paybook, an official rank of Private, and a serial number. Wojtek became an enlisted soldier.

The Polish II Corp was tasked with breaking the Nazi defenses at Monte Cassino. During the conflict, Wojtek was at the artillery firing line and was seen moving crates of ammunition from the trucks to the cannon lines. He was not dissuaded by the sounds of war. The Poles were successful in taking the Nazi stronghold.

After the battle,Wojtek was promoted to Corporal. The 22 Transport Company was also permitted to change their official badge to a silhouette of Wojtek holding an artillery shell.