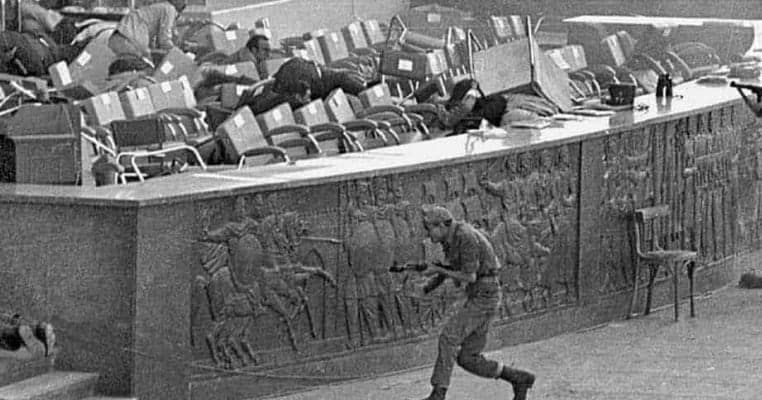 The Six Day War began on June 5th, 1967, when the Egyptians were surprised by the sudden appearance of Israeli warplanes over 11 airfields at 7:45AM that morning. A first wave of attackers targeted the runways with special munitions: prototype penetration bombs that used accelerator rockets to drive warheads through the pavement before detonation. The result was a sinkhole that required the complete removal of the damaged pavement in order to get at and fill in the cavity beneath – a laborious and time consuming process. With the runways destroyed, Egyptian airplanes on the ground were stranded, sitting ducks for subsequent airstrikes.

197 Egyptian airplanes were destroyed in that first wave, with only 8 planes managing to take to the air. After striking an initial 11 airbases, the Israeli planes returned home, refueled and rearmed in under 8 minutes, then headed back to wreck an additional 14 Egyptian airbases. They returned to Israel for yet another speedy refueling and rearming, and flew out in a third wave, divided between attacking what was left of the Egyptian air force, and striking the Syrian and Jordanian air forces. By noon on June 5th, the Egyptian, Syrian, and Jordanian air forces were effectively wiped out. Israel’s enemies lost about 450 airplanes, and about 20 enemy airbases were wrecked.

2. America’s Favorite Asian Dictator Was As Corrupt As it Gets

Philippine dictator Ferdinand Marcos was a staunch anticommunist, which qualified him as a staunch US ally during the Cold War. In 1976, Filipino journalist Primitivo Mijares wrote a tell-all that spilled the beans about the dictator and his wife. The phrase “Conjugal Dictatorship” caught on and entered the Philippines’ political lexicon, to describe the power held by Ferdinand and Imelda Marcos. It was especially applied to Imelda, who held numerous government positions that transformed her into a political power in her own right.

Writing and publishing a book critical of the Philippines’ corrupt power couple was a courageous act. It did not turn out well for Primitivo Mijares: he disappeared soon after publishing his book, and his son Boyet Mijares was found dead later, after he was brutally tortured and dropped from a helicopter. It was swept under the rug by Filipino police, who claimed that the death was caused by college fraternity roughhousing and hazing gone wrong. However, Boyet Mijares was not in college when he died: he was still in high school, a year away from graduating.

1. The Introduction of the M16 Rifle Was Disastrous

When the first version of the M16 rifle was introduced to the US military, it was billed as a self cleaning rifle. No such weapon has ever existed. The military also issued cartridges with propellant that was dirtier than what the M16 had been designed to use. Making it worse, the troops were neither issued cleaning kits, nor taught how to clean their new rifles. On top of that, the firing chamber lacked chrome plating, leading to increased corrosion. When the inevitable jamming resulted, the original M16s lacked a forward assist – a device to manually push the bolt fully forward if it failed to do so on its own.

The consequences were disastrous. Troops in Vietnam reported that the new rifle was prone to jamming, and before long, dramatic stories were making the rounds, of entire patrols wiped out. As tales told it, their bodies were discovered next to their jammed rifles, their dead hands clutching cleaning rods, testimony to their last harrowing moments on earth, spent in feverish attempts at clearing stuck cartridges. It took the introduction of an upgraded M16A1, and the issuance of cleaning kits and teaching the troops how to care for their rifle, to remedy the situation.

Association For Diplomatic Studies and Training – The Assassination of Anwar Sadat

CNN, November 18th, 2013 – One JFK Conspiracy Theory That Could be True

Halberstam, David – The Coldest Winter: America and the Korean War (2008)