This Ship Disaster was the Titanic of the 19th Century 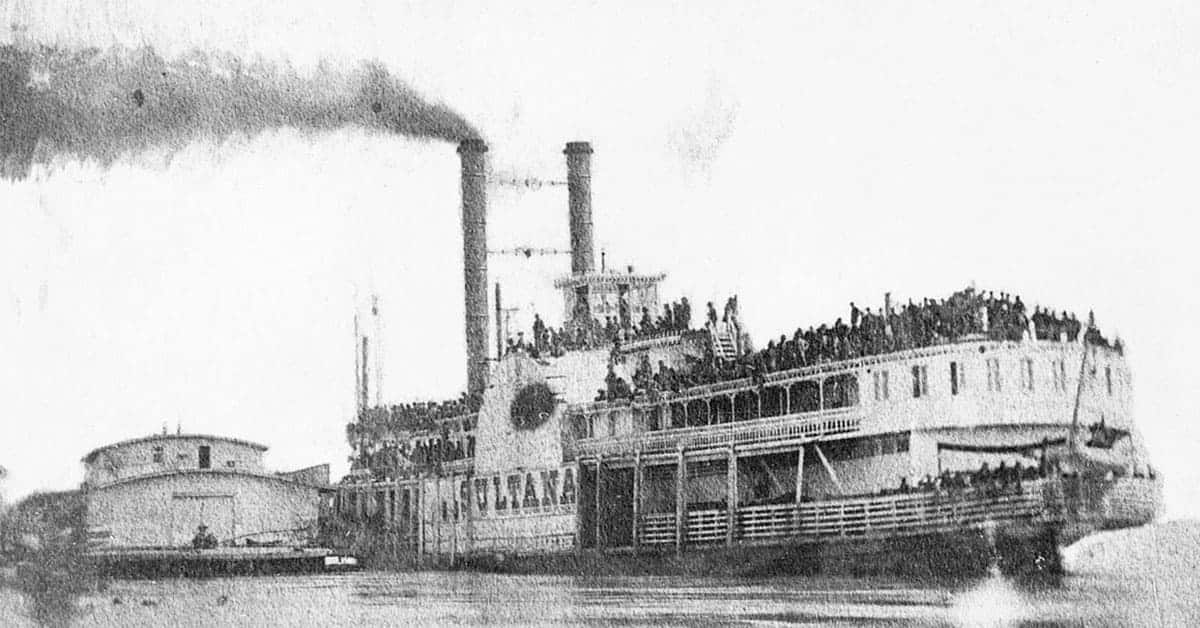 This Ship Disaster was the Titanic of the 19th Century

Just after the sinking of the Titanic in April 1912, a group of people met in Knoxville, Tennessee. However, they gathered not just to mourn the 1,517 people who died in the tragedy, but also to commemorate a maritime disaster that possibly claimed even more lives. They were survivors of the sinking of the Sultana, a steamboat that exploded and sank on the Mississippi River, just seven miles away from the city of Memphis.

The disaster occurred on April 27, 1865, and resulted in the deaths of anywhere between 1,200 and 1,800 people depending on the account you read. It was the worst maritime disaster in American history at the time yet it garnered relatively little attention. The sinking of the Sultana wasn’t particularly well covered in magazines or newspapers and was quickly forgotten. Even today, the Sultana disaster is seldom mentioned; especially in comparison to the Titanic.

Certainly, April 1865 was among the busiest months in American history regarding newsworthy events. On the 9th, General Robert E. Lee surrendered at Appomattox Courthouse. Five days later, President Abraham Lincoln was assassinated in Ford’s Theater and on the 26th, the day before the Sultana disaster, John Wilkes Booth, Lincoln’s assassin, was killed. On the very same day, General Joseph Johnson surrendered the final large Confederate Army and the leader of the Confederates, Jefferson Davis, was captured. The U.S. Civil War had ended, and newspapers in the North celebrated.

All of the above contributed to the Sultana disaster becoming a forgotten story so let’s bring some details to light. The Sultana was a wooden steamboat constructed in 1863 in Cincinnati. It was supposed to be used for the cotton trade on the lower Mississippi River and typically carried a crew of 85 people. The Sultana normally traveled between St. Louis and New Orleans and routinely carried military personnel during the Civil War.

When the Sultana left St. Louis bound for its usual destination, New Orleans, on April 13, 1865, there was no inkling of the tragedy to come. However, news of Lincoln’s assassination caused the boat’s captain, J. Cass Mason, to take the fateful decision to travel south to spread the news since communications were cut off due to the war. When he reached Vicksburg, Mississippi, he was offered a proposition by Lieutenant Colonel Ruben Hatch.

Thousands of Union POW’s that had recently been released from the prison camps of Andersonville and Cahaba needed transport. Hatch told Mason that the Government would pay $10 per officer and $5 per enlisted man to any captain willing to bring them north. Hatch offered to give Mason a full load of 1,400 men in return for a kickback. Mason agreed, and his greed ultimately doomed over 1,500 people.

Thousands of Union POWs gathered at Vicksburg, and a number of steamboats were waiting to bring the men home. The Sultana was the last to leave, and due to a mix-up in the numbers, it ended up carrying at least 2,400 passengers while some reports say there were over 2,500 people on board. This was overcrowding on an astonishing scale since the Sultana had a maximum capacity of 376.

The POWs gladly squeezed on board the Sultana because the discomfort was nothing compared to what they had encountered in Confederate prison camps. Hundreds of POWs were carrying illnesses but had mustered the strength to climb on board while there were also women and children amongst the passengers. The overcrowding was so severe that the decks started to creak and had to be supported by wooden beams. To make matters worse, the boat was fighting against one of the worst spring floods in the Mississippi River’s history as it traveled upriver. In hindsight, a tragedy was inevitable.

The Sultana left Vicksburg on April 24, and Mason told an army officer that the vessel had carried that many people before and the men were in good hands. The officer said to take good care of the soldiers because they deserved it. Tragically, a large proportion of them never made it home.

On April 26, the Sultana landed at Memphis to pick up coal after briefly stopping in Helena, Arkansas. It was there that a photographer named T.W. Bankes took a photo that clearly showed how overcrowded the vessel was. Yet it continued on its journey but at 2 am on the morning of April 27, 1865, calamity struck as one the vessel’s four boilers exploded.

It transpired that the reason why the Sultana was the last ship to leave Vicksburg was that one of its boilers sprang a leak. Instead of removing the bulge in the boiler and replacing it, Captain Mason ordered a quick fix with a piece of metal placed over the bulge. A full repair would have taken up to four days, and in that time, other ships may have arrived to take the passengers and the captain’s money.

It was the patched up boiler that exploded first followed soon after by the explosion of the two other boilers. Fire quickly spread throughout the wooden steamship and panic ensued amongst the passengers who could barely move let alone flee. Two smokestacks fell on the Sultana and crushed hundreds of people inside the Hurricane deck. The survivors jumped into the Mississippi rather than stay to fight the fire as the flames sped towards the stern.

Those who were not killed immediately by the explosion were either crushed to death in the stampede to abandon ship or else they drowned in the Mississippi. The water was still cold due to winter runoff, so many of those who jumped in died from hypothermia. An estimated 700 people made it to dry land at Memphis, but 200 of them died in hospital soon afterward.

The number of dead passengers would have been far greater only for the timely arrival of the steamer Bostona II. It was traveling downriver on its maiden voyage and came across the ghastly scene about one hour after the initial explosions. The crew of the Bostonia II probably saved well over 100 people. Dozens of other survivors were picked up by U.S. warships and docked steamships. What remained of the Sultana drifted for six miles before sinking off the coast of modern-day Marion, Arkansas.

Given the fact that the tragedy was clearly a case of negligence, greed and human error, it is astonishing to note that no one was ever found accountable and punished for the sinking of the Sultana. Only a Union officer by the name of Captain Frederic Speed was even charged with a crime in connection to the tragedy. He was initially found guilty of overcrowding, but the charge was overturned. Hatch resigned from the army so couldn’t be held accountable by a military court, and Mason died in the tragedy.

The exact number of victims is unknown although modern historians place the figure at 1,196 while others suggest the number is greater than the 1,512 that perished on board the Titanic. The official inquiry determined that the explosion was caused by a combination of careening, low water level and a faulty repair to one of the boilers. Obviously, the problem was exacerbated by the severe overcrowding which ensured the vessel was top heavy.

Despite the devastating nature of the tragedy, the sinking of the Sultana remains a mere footnote in American history. Indeed, the disaster was all but forgotten until the remains of the vessel were found in 1982. From 1885 onwards, survivors of the tragedy began attending reunions on an annual basis in Toledo, Ohio. Another group, comprising of survivors from Tennessee and Kentucky, began meeting in 1889 and shared the National Sultana Survivor’s Association title.

The groups met as close to the date of the disaster as possible, but only one person turned up in 1930. Jordan Barr was the last northern survivor as he died in 1938 and Charles M. Eldridge has the distinction of being the last known survivor of the sinking of the Sultana. He died on September 8, 1941. It is remarkable that this disaster is seldom mentioned and it is also a particularly grisly addition to the casualties of the U.S. Civil War.