In 1961 Two Nuclear Bombs, each 250 Times the Power of the Hiroshima Nuclear Bomb, Were Dropped on North Carolina. 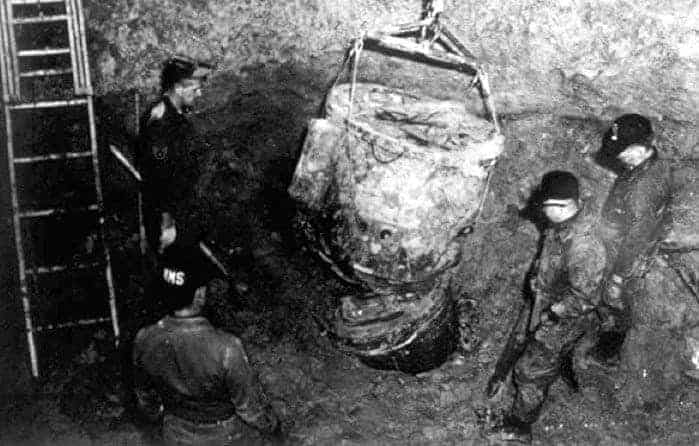 In 1961 Two Nuclear Bombs, each 250 Times the Power of the Hiroshima Nuclear Bomb, Were Dropped on North Carolina.

The bomb that had deployed it’s parachute was actually found standing upright because the parachute had been caught in a tree. It also hit the ground without any damage to it was far easier to recover than the bomb that did not deploy a parachute. The second bomb landed into a muddy field going an astonishing 700 miles an hour. Most of the bomb disintegrated on impact but some parts were able to be recovered. The tail of the bomb was found 20 feet underground. Contrary to what the Pentagon and the Department of Defense had stated, this bomb was partially armed when it left the plane. Luckily it did not progress any further through the arming sequence due to an unclosed high-voltage switch.

In 2013, after the information had been released Lt. Jack ReVelle, the bomb disposal expert who was responsible for disarming the bombs spoke about the discovery of the second bomb. When the second bomb’s switch was found ReVelle recalled “until my death I will never forget hearing my sergeant say, “Lieutenant, we found the arm/safe switch, ‘And I said, Great.’ He said, ‘Not great. It’s on arm.” The report in 2013 also revealed just how close the first bomb had been to detonation. It had gone through the entire arming process and only one un-flipped switch (out of 4) prevented the bomb from detonation.

The first bomb was easily recovered and removed. The second was considered too difficult to excavate and it was simply left there. Most of the uranium and plutonium is still there but the core of the bomb was removed. The U.S. Army Corps of Engineers bought a 400 feet easement over the buried nuclear bomb.

The sheer destructive power of the nuclear bombs that very nearly destroyed a major portion of the Eastern seaboard of the United States is astonishing. It is estimated that each bomb exceeded the year of all munitions (with the exclusion of testing) ever detonated in the history of the world (TNT, gunpower, conventional bombs and nuclear bombs) combined. Each one had 250 times the destructive power of the bomb dropped on Hiroshima. A report in 1969 found that the bombs did not have adequate safety for an airborne role. In 1964 major engineering changes came to the B-52 to fix points of weakness and ensure that the problems that caused the 1961 crash, never happened again.